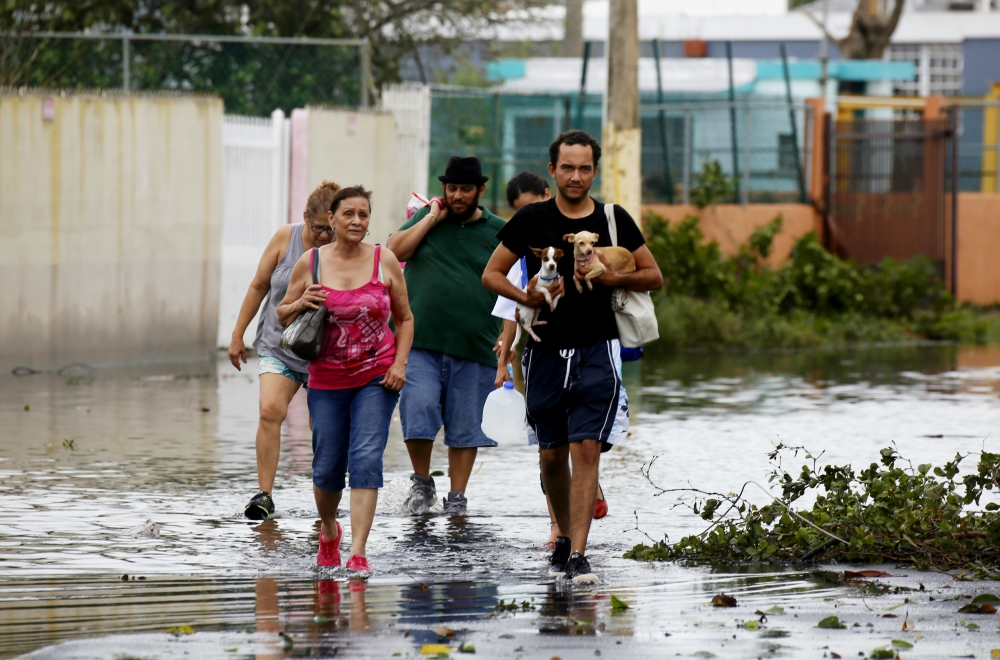 People walk in a flooded street Sept. 21 in Toa Baja, Puerto Rico, in the aftermath of Hurricane Maria. (CNS/EPA/Thais Llorca)

Puerto Rico, Dominica, the Virgin Islands, St. Maarten. Most Americans think of these small island nations when we get the weekly emails from Expedia offering special fares or hotel rates, the pictures of idyllic beaches with palm trees waving in the breeze enticing with the promise of a relaxing getaway, a destiny where you can escape life's cares and refresh the body and spirit.

The reality of life for the inhabitants of these islands was less relaxing and more harsh. Census data released in 2013 showed that the poverty rate in Puerto Rico had hit 44.9 percent, double that of any U.S. state. Data from 2003 pegged the poverty rate in Dominica at 40 percent. The people who staff those posh beachside hotels are not making a lot of money to cook the food or clean the bathrooms.

This month, those islands were placed in an additional and vicious crucible. First, Hurricane Irma hit the northeastern islands, and then Maria hit others. People in St. John and St. Thomas were evacuated to St. Croix, but then St. Croix got a direct hit from Hurricane Maria last week. St. Maarten was devastated by Irma and 100 percent of Puerto Ricans lost power when Maria came ashore. 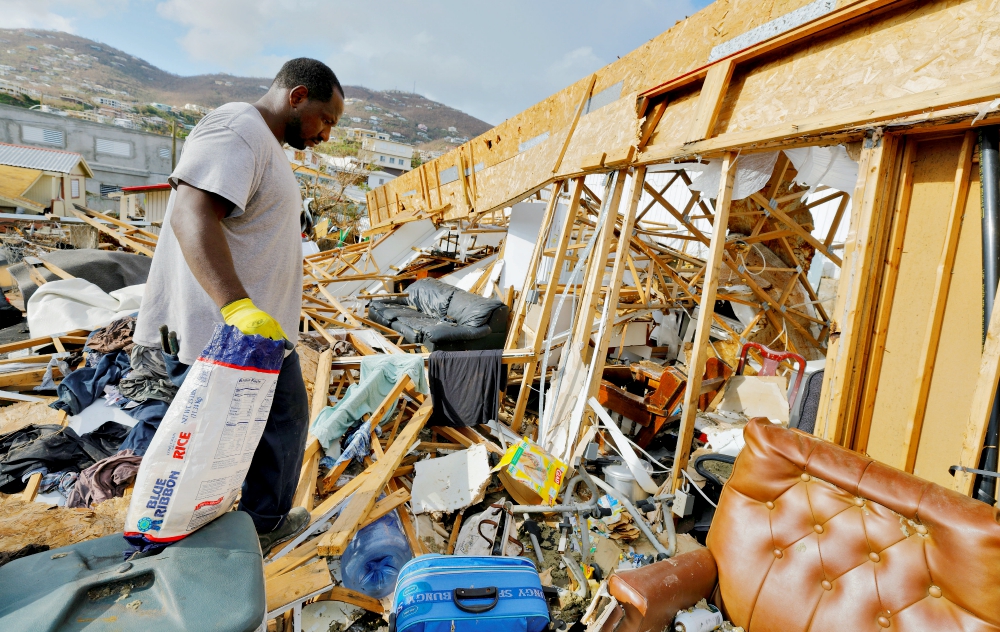 A man looks through the debris of his destroyed home in the aftermath of Hurricane Irma Sept. 17 in St. Thomas in the U.S. Virgin Islands. (CNS/Reuters/Jonathan Drake)

All these islands suffered from a deficit of economic activity before the storms. That activity ceased entirely this week, except for the construction sector, which must first clear the debris and then begin the arduous task of rebuilding. How does an economy function when it is estimated to take four to six months to restore power?

Relief efforts help. It tells you all you need to know about the capacity of the poor to be generous to think of the flotillas of aid the poor people of Puerto Rico brought to the Virgin Islands after Irma. Archbishop Roberto González of San Juan boarded a National Guard helicopter filled with water and medicines the Catholic Church in Puerto Rico had collected for their suffering sisters and brothers in St. Thomas.

After Maria, water and medicine is needed desperately in Puerto Rico.

There will be second collections in our churches. The Red Cross and Catholic Relief Services sprang into action. The federal government has promised aid, at least to those islands that fly the U.S. flag.

Hurricanes strengthen when they hover over warm water. The warmer the water, the stronger the hurricane will get. This is not in doubt. Nor is there any doubt that the oceans are warming as a result of human activity. The crucible in which the Caribbean finds itself was only partly made by nature. Nature got a helping hand from the addiction of the wealthy countries of the North to fossil fuels.

We in the U.S. did not create the hurricane, but we have created the conditions to make hurricanes more frequent and more powerful. For this, we must pay.

The first payment is due to those affected by the hurricanes. Standard relief efforts will not suffice. We must rebuild the infrastructure of these islands, and build in such a way that it is less susceptible to damage from future storms.

All of the islands in question have ample supplies of sun and wind, yet solar and wind power make up a small fraction of their energy production. This must change. The directors of the reconstruction would be well-advised to consult with solar companies and wind companies not only about large-scale installations, but also about small-scale projects.

Our friends at New Vision, a ministry in West Virginia, use old campaign signs to make small solar panels that provide electricity for a single home for an evening. I wrote about their wonderful work here. There are hamlets in these islands that would benefit from the approach taken by New Vision. 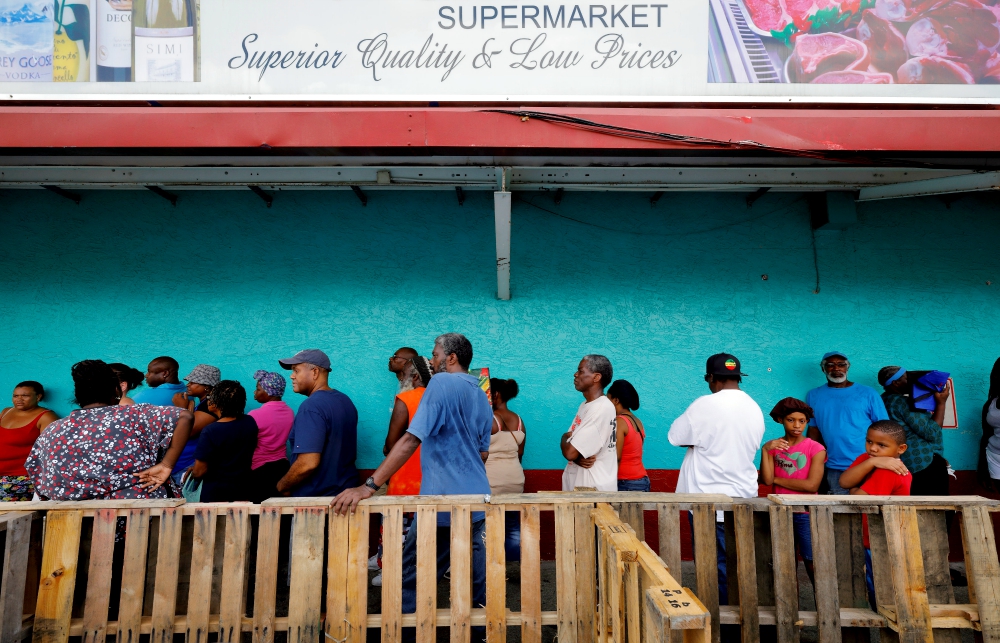 Victims of Hurricane Irma wait behind a makeshift barricade for admission to a local supermarket shortly after curfew was lifted in St. Thomas in the U.S. Virgin Islands. (CNS/Reuters/Jonathan Drake)

For the large cities, a more substantial reconstitution of the energy infrastructure is required and, in justice, it is required that we in the wealthy North pay for it.

Helping these islands convert from fossil fuels to sustainable energy sources would also represent a second payment, to future generations. The Holy Father has warned us. The scientists have warned us. We are destroying our planet.

There are many reasons to be disgusted at the political landscape here in the U.S. at this moment. But surely one of the greatest sources of that disgust is the fact that both houses of Congress and the White House are in the hands of a party incapable of moral seriousness on the issue of climate change. Beholden to the donations of companies in the extraction industry, they have created an entire counterfactual narrative about the environment. It is shameful.

Additionally, we must help rebuild these islands by requiring that the international community, and the U.S. specifically, write down the debt that they owe. This article at Truthout, which is not a Catholic publication, sheds light on the work being done by the Catholic Church to argue for a massive program of debt forgiveness for these poor islands, and especially the work of Jubilee USA. And I wrote about the debt relief situation in Puerto Rico here.

Cardinal Daniel DiNardo, president of the U.S. bishops' conference, recently pledged the support of the conference to this effort. Debt forgiveness has been a central concern of the Catholic Church since St. Pope John Paul II made it a major focus of our celebrations of the new millennium.

All of these actions are required not only by Christian charity but by justice. It is morally obscene that we in the wealth global north live in such comfort while our sisters and brothers in the global south pay the price for our comfort. 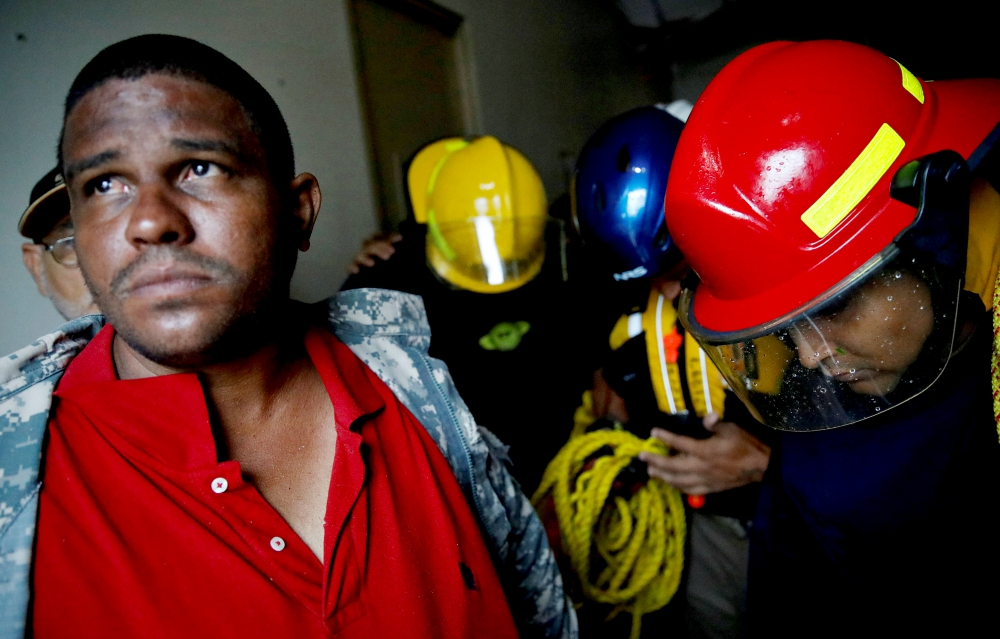 Regular readers will know that I brought my dad to Puerto Rico every year while he was alive, so that he could visit old friends. My family has a special love for that island ever since my parents lived there for the first years of their married life when my dad was stationed in the army at Camp Tortuguero during the Korean War.

But that love does not color my judgment. Justice is at issue here and its demands are as clear as they could be. The only thing keeping us from meetings those demands is the willful selfishness of some big corporations and the politicians they can buy.