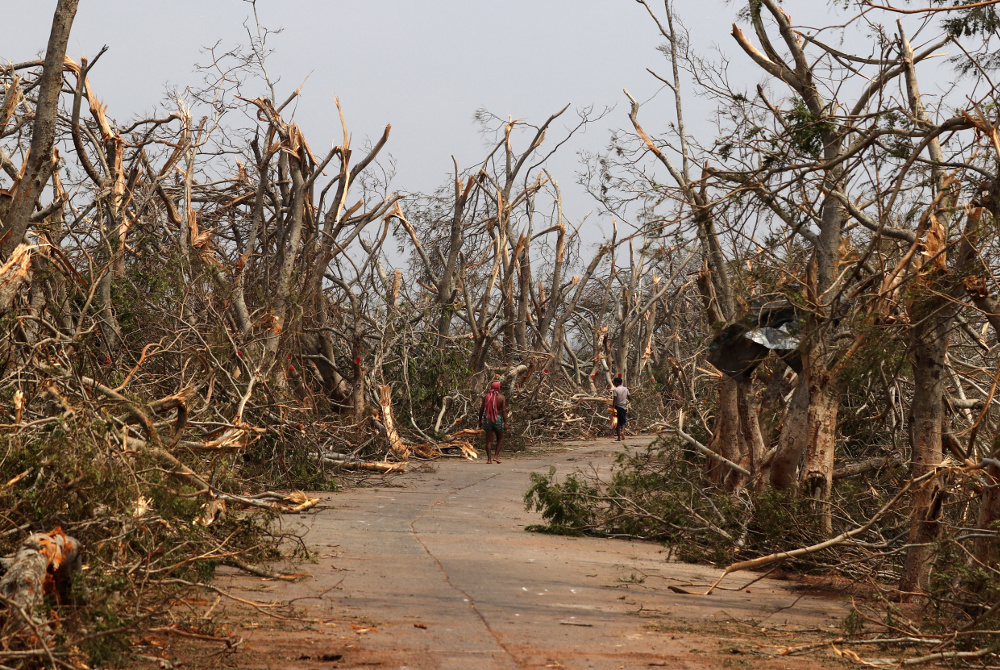 People walk past damaged trees May 4, 2019, following Cyclone Fani in Puri, India. The powerful cyclone ripped through eastern India and sideswiped Bangladesh, May 3, leaving a trail of destruction and more than 30 deaths.(CNS/R. Narendra, Reuters)

A powerful cyclone ripped through eastern India and sideswiped Bangladesh, leaving a trail of destruction and more than 30 deaths.

Authorities said the evacuation of 1.2 million people from more than 10,000 villages prior to Cyclone Fani's landfall May 3 prevented a larger death toll and minimized injuries, ucanews.com reported.

The immense storm killed at least 29 people in India — mostly in Odisha, a poor coastal state — and at least five are reported dead from the storm in neighboring Bangladesh.

Calling Fani the worst cyclone to hit the area in two decades, the archbishop told ucanews.com that winds had destroyed thatched houses and downed trees, utility poles and telecommunication networks.

He said the archbishop's house and a convent in Bhubaneswar, about 37 miles north of the city of Puri along India's northeastern coast where the storm came ashore, also were damaged.

State officials told Indian media that a massive relief effort is underway and that teams of emergency workers are working to restore basic services including electricity, water and mobile phone connectivity.

"We have been living in the dark since May 3. We have no electricity, proper drinking water or other basic facilities," Barwa said May 6. Archdiocesan staff "are unable to contact our parishes, religious houses because all telecommunication lines have been destroyed," he added.

"I cannot even send people to affected areas because all road and rail traffic is disrupted," he said.

Catholic Relief Services, the U.S. bishops' overseas relief and development agency, was working with Caritas India to assess which areas needed the most assistance. The agency was focusing on Puri, Jagatsinghpur and Bhubaneshwar to identify needs and gaps in assistance.

"Many people have lost their homes as the storm smashed river embankments and the flooding then inundated their villages," Malakar told ucanews.com.

Caritas Khulna has been assisting those affected by the storm, said Jibon Das, regional director for the church's charitable agency.

"Caritas volunteers warned and led people to 245 cyclone shelters set up by Caritas before the storm struck," Das said.

"We have distributed dry food to some 600 families," he added. "An assessment of damages is being done, and rehabilitation projects will start once the reporting is complete and funding received."