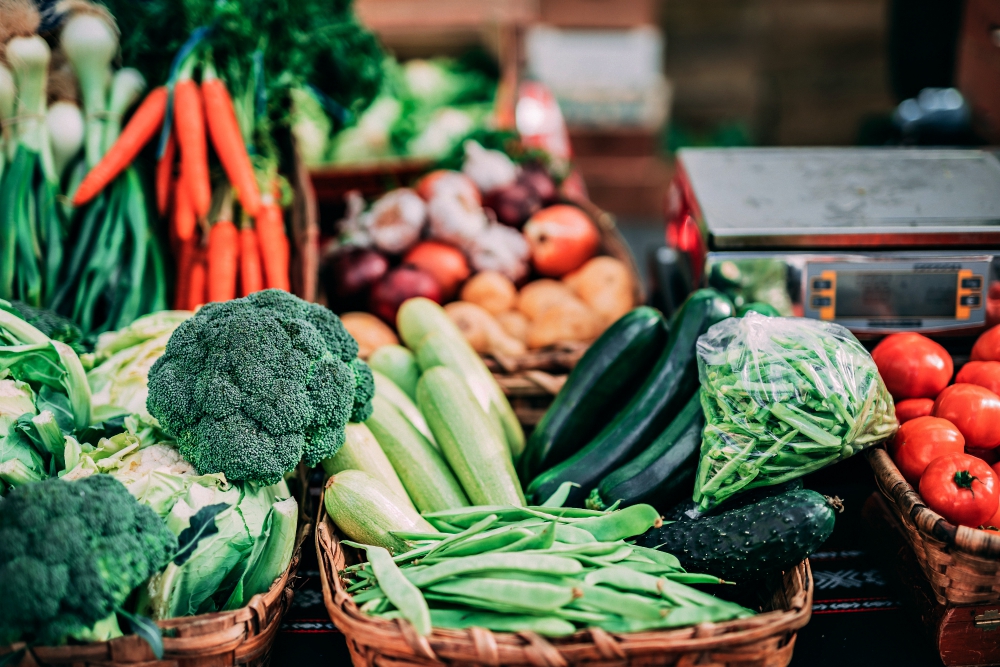 From eggplant lasagna to lentil sloppy joes, the Sisters of Mercy have cooked up some of their favorite vegetarian recipes as a way to invite Catholics to join them in eating less meat this Lent — and not just on Fridays.

This year, the religious congregation is extending the Lenten tradition of abstaining from meat on Fridays to add Mondays in what they're calling Mercy Meatless Mondays. The program is a continuation of one they began during the 2019 Season of Creation (Sept. 1-Oct. 4) and builds on the wider Meatless Mondays movement to address climate change with more plant-based diets. 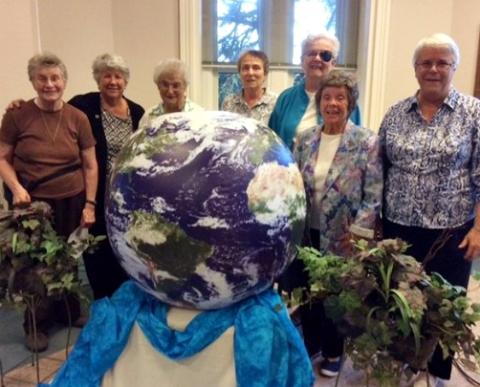 Mercy Sr. Sue Gallagher (second from left) takes part in a presentation on the Season of Creation in September 2019. (Sisters of Mercy)

"It fits in really nicely with our commitment to care for Earth," said Mercy Sr. Suzanne Gallagher, justice coordinator for the Mid-Atlantic Community. "Just think, three times a day you can choose to care for Earth. I think that's amazing."

Roughly one-quarter of global greenhouse gas emissions produced by human activity come from agriculture, forestry and other land use, according to the United Nations Intergovernmental Panel on Climate Change — or about double the emissions from all cars on the planet. The global food system, including pre- and post-production activities, accounts for as much as 37% of total greenhouse gas emissions.

Producing meat for consumption, and in particular beef, requires huge amounts of water and land. As forests are cleared for pastures, carbon dioxide stored in the trees is released, and fewer trees remain to absorb the planet-heating emissions from the atmosphere.

While many parts of the world don't have meat-based diets, global meat consumption has grown 20% in the past decade.

Studies have shown that reducing meat consumption is one of the critical steps to curb climate change, and to meet the Paris Agreement goals of limiting global temperature rise as low at 1.5 degrees Celsius (2.7 degrees Fahrenheit). An August report from the U.N.'s Intergovernmental Panel on Climate Change found that dietary changes, including featuring more plant-based foods, could eliminate annually by 2050 up to 8 gigatons of carbon emissions, or the equivalent emissions from 1.7 billion cars.

Initially a U.S. government effort during World War I to reduce consumption of staple meal items, Meatless Mondays was revitalized in the early 2000s as a campaign to benefit both human health and the environment.

Part of the climate impact from meat is tied to deforestation to clear land for cattle grazing. The massive fires that consumed large swaths of the Amazon rainforest last summer were in part triggered by ranchers and farmers setting fire to sections of the land to prepare for planting or to create pasture for cattle herds.

At the Vatican's special synod for the Amazon, held in October, Bishop Karel Marinus Choennie of Paramaribo, Suriname, critiqued calls from the Western world for South American nations to save the rainforest without examining the role that Western nations' own lifestyles, including diets, play in fueling its destruction.

"Even if we implement all the measures against deforestation or against the polluting of the rivers, it would still not have an effect if [people in] the Western world — Europe, America, Japan and China — don't change their lifestyles," he said at an Oct. 22 press briefing.

The Amazon bishop singled out meat consumption specifically, saying, "The forest is disappearing because Europe and China and the rest of the rich world want to eat meat."

The idea of Meatless Mondays came onto the radar of the Sisters of Mercy justice team from the Sisters, Servants of the Immaculate Heart of Mary, in Monroe, Michigan, who last year integrated the practice into their Lenten observance.

During the same liturgical season, the Global Catholic Climate Movement too encouraged its network to "eat simply" and dine on more vegetarian meals. Pope Francis himself received a less-meat challenge last year from a young animal rights activist who asked him to adopt a vegan diet during Lent.

Education is a main aim for Mercy Meatless Mondays.

A guide compiled by the sisters walks Catholics through a prayerful approach to eating less meat. It shares facts on the negative impacts of meat production on the environment, as well as workers and animals, particularly in large-scale factory farms, and highlights benefits of eating local. A link to a video from University of California researchers further explains how food choices impact the environment.

"We wanted [participants] to know what happens when we eat meat. I mean, it's the unseen costs that that meat has on your plate that we're really unconscious of so many times," Gallagher told NCR's EarthBeat. 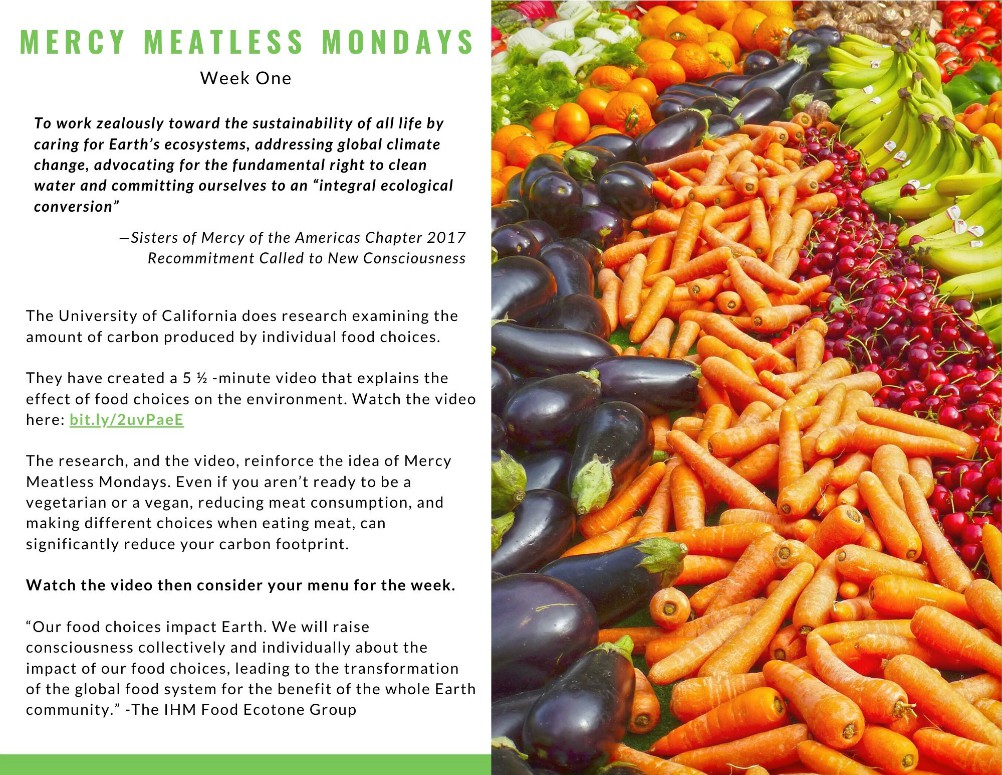 A page from the Mercy Meatless Mondays guidebook. During the first week of Lent, the Mercy sisters highlight their order's commitment to creation care and sustainability, and invite participants to consider the effect of their food choices on the environment. (Sisters of Mercy)

At one point in the meatless guide, which is lined with quotes from Francis, a mindfulness meditation leads participants through a reflection on the journey their food takes from fields to their plate, appreciating all those who handled it along the way. Another reflection highlights the Mercy sisters' own decadeslong critical concern of caring for the Earth, and their commitment to an "integral ecological conversion" as a way to work toward sustainability and to address climate change.

To help warm carnivorous Catholics' appetites to the idea of forgoing meat an extra day a week, the Mercy sisters offer tips on how to gradually substitute meat with plant-based foods, and they serve up some recipes from their own kitchens.

Sr. Leslie Porreca, kitchen manager at Cranaleith Spiritual Center in Philadelphia, shares her recipe for an Asian slaw composed of cucumbers, cabbage, carrots and a variety of peppers. Likewise, Kelly Lionello, regional food services director for the Sisters of Mercy in Auburn and Burlingame, California, presents her recipe for a spinach puff dish.

The Mercy sisters are encouraging others to share their own meatless recipes on social media with the hashtag #MercyMeatlessMondays. They hope to eventually create a cookbook from all the submissions.

A favorite for Gallagher is the vegetarian chili, and she's eager to try the eggplant lasagna — which, if prepared right, she said "can give you the texture of meat."

The sister from Philadelphia has been a vegetarian for three years. While she never ate much beef, she was inspired to retreat from meat entirely by Francis' encyclical "Laudato Si', on Care for Our Common Home" and Fr. John Dear's book They Will Inherit the Earth: Peace & Nonviolence in a Time of Climate Change. She plans to use this Lent to abstain from dairy.

For others who might be seeking a bigger challenge, the sisters recommend trying to refrain from meat each day at lunch or plan meals with fruits, vegetables and grains as the main entrée. And they also encourage people to consider extending a less-meat lifestyle beyond the 40 days of Lent. 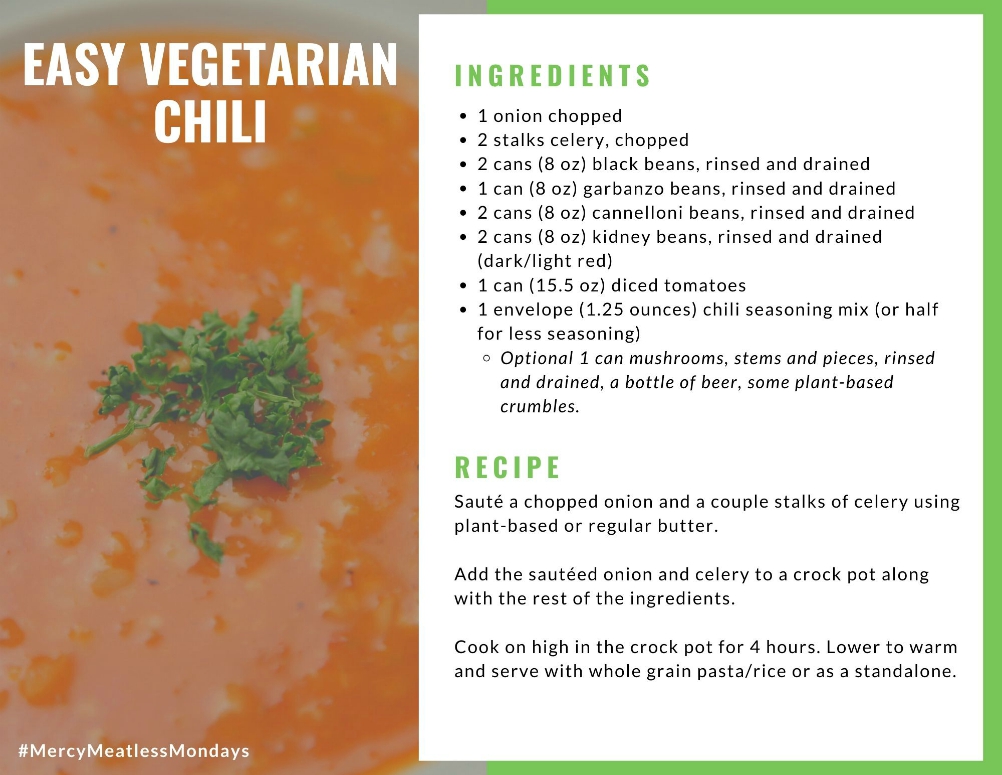 A recipe for vegetarian chili is included in the Mercy Meatless Mondays guidebook. In addition to numerous vegetarian recipes, the guide offers reflections for participants to consider how a less-meat diet can benefit both health and the environment. (Sisters of Mercy)

Today, many traditionally focused Catholics do just that, and continue to observe a yearlong fast from meat on Fridays as an act of penance. Following the Second Vatican Council, Pope Paul VI relaxed the year-round meat abstention from obligatory to voluntary. But the practice has re-emerged in recent years, as the bishops of England and Wales restored it in 2011, and several U.S. bishops have encouraged it in their dioceses.

Gallagher said she would invite Catholics who abstain from meat on Fridays for religious reasons to also examine the positive effects that that choice, regardless of motivation, can have on the environment, God's creation that all are called to protect and preserve.

"To know that, hey, it's a benefit," she said. "You're doing something good for the Earth."