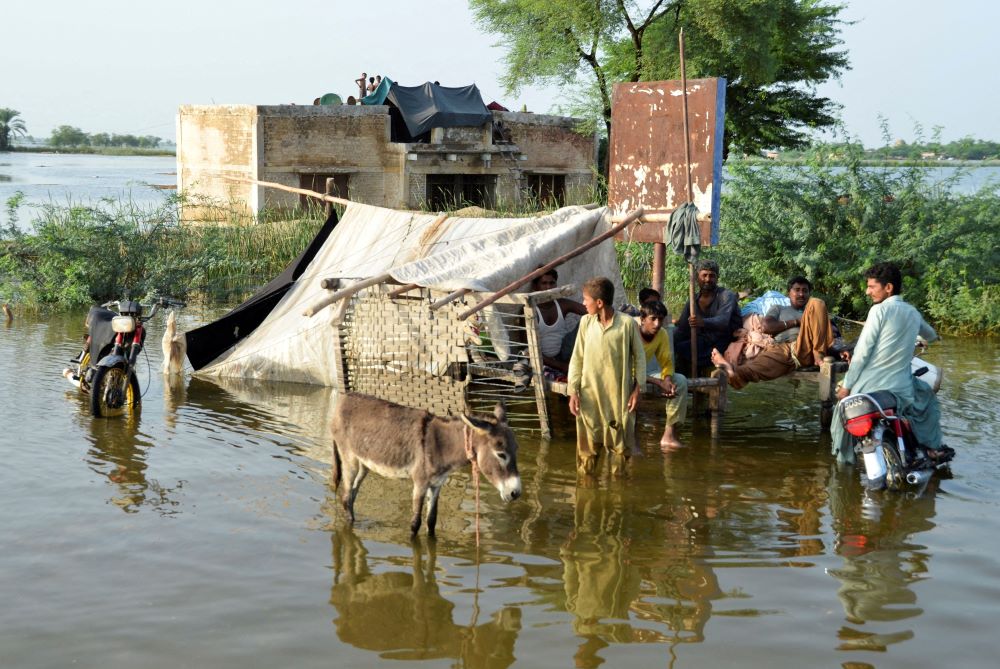 People wade in floodwaters outside their home, following heavy rains during the monsoon season in Sohbatpur district of Pakistan, Aug. 28. Experts say about one-third of the country is under water. (CNS/Reuters/Amer Hussain)

Editor's Note: This story was updated at 12:20 p.m., CST, with details from the opening interfaith prayer service for the Season of Creation.

With the 2022 Season of Creation carrying the theme of "Listen to the Voice of Creation," it was only natural for the Missionary Society of St. Columban to relaunch its podcast on biodiversity loss.

The six-episode season follows the 2019 debut of the "Jubilee for the Earth: Biodiversity and Our Sacred Story" podcast, and looks at the threats facing ecosystems and species through a multitude of lenses: spirituality, Indigenous and youth perspectives, and how conserving nature intersects with climate change and advocacy for the common good.

"We noticed that was not being talked about within the church," said Wesley Cocozello, host and producer of the podcast and communications manager for the Columbans' U.S.-based justice, peace and integrity of creation team. "We are talking more and more about climate change, but that kind of holistic approach to creation that takes into account not just the climate but ecosystems and non-human animals was something that we felt was missing and wanted to bring into the conversation." 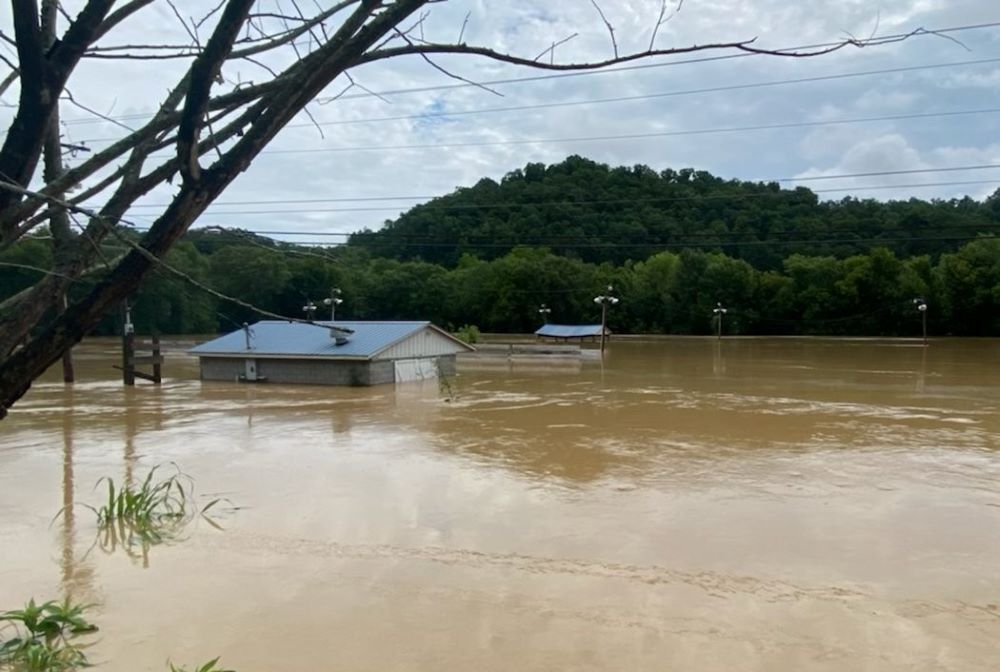 Floodwaters are seen in Jackson, Ky., July 28. Torrential rains fell late July 27 and into the next day in southeastern Kentucky, causing massive flooding that destroyed hundreds of homes and wiped out entire communities. (CNS/Diocese of Lexington/Edward Bauer)

Listening to overlooked or unheard voices across nature is a central element for this year's Season of Creation, an annual period of Christian observance to pray and care for God's creation. The season began Sept. 1, the World Day of Prayer for Creation, and concludes Oct. 4, the feast day of St. Francis of Assisi, the patron saint of ecology.

This year's theme, "Listen to the Voice of Creation," was selected by an ecumenical steering committee that includes the World Council of Churches, Laudato Si' Movement, Lutheran World Federation, World Methodist Council and the Vatican Dicastery for Promoting Integral Human Development.

The committee also designated the "burning bush" from the Book of Exodus as the logo for this year's season — representing how extreme heat, wildfires and other impacts of climate change are devastating communities and ecosystems, and serving as a symbol to hear God speaking through creation as Moses did when he encountered the burning bush.

Related: Indianapolis Catholic is leading pope's global plan to care for the earth

At his general audience Aug. 31, Pope Francis expressed hope this year's Season of Creation theme would "foster in everyone a concrete commitment to care for our common home."

"At the mercy of our consumerist excesses, our sister Mother Earth groans and begs us to stop our abuse and her destruction," the pope said.

In his 2015 encyclical "Laudato Si', on Care for Our Common Home," Francis said that ecological destruction is inseparable from questions of justice, urging all people to "hear both the cry of the earth and the cry of the poor."

The summer preceding this Season of Creation has been filled with both.

Massive flooding in Pakistan during monsoon season has drawn comparisons to biblical times, with as much as one-third of the country submerged underwater, more than 1,000 people dead since June and millions more displaced from their homes, and large stretches of roads, buildings, bridges and farmlands destroyed by the raging waters. Pakistan, the world's fifth-most populous country where nearly 40% of its 220 million people live in poverty, regularly ranks among the countries most vulnerable to climate change despite contributing less than 1% of global greenhouse gas emissions.

"We want to showcase this to the developed world in particular. The quality of life that people in the West are enjoying today, someone is paying the price in the developing world," Ahsan Iqbal, Pakistan's minister for planning and development, told reporters, including at The Washington Post, of the floods. 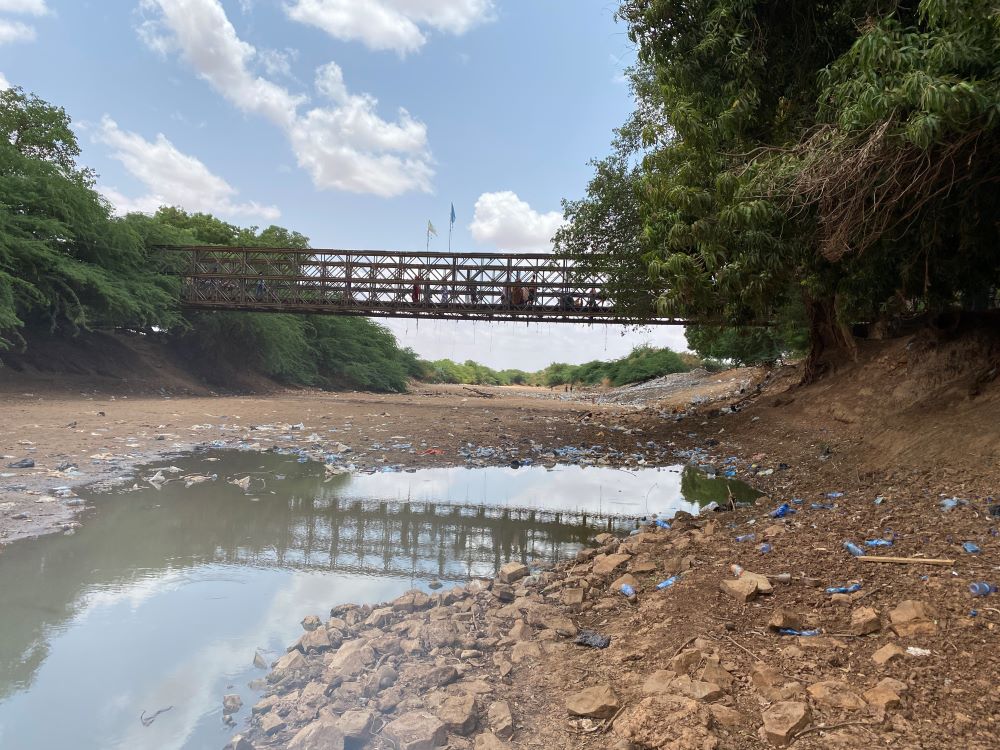 The Juba River, pictured April 12, on the border between Somalia and Ethiopia, is normally an important source of water and is bustling with people and livestock. Due to the ongoing drought it has dried up, leaving communities without a vital water lifeline. (CNS/Trócaire/Miriam Donohoe)

At the same time, scorching heatwaves stretched across many parts of the Northern Hemisphere, setting all-time temperature records in places like London, and exacerbating major wildfires across the globe, in South Korea, Algeria, Russia, Portugal, Spain and other parts of Europe. Droughts have dried up rivers and farmlands across the global map, and in the Horn of Africa the worst drought in 40 years has pushed food supplies to the brink and raised the risk of famine, with global hunger exacerbated further by the war in Ukraine.

"If we learn how to listen, we can hear in the voice of creation a kind of dissonance," Francis said in his message for the World Day of Prayer for the Care of Creation, which was issued in July. "On the one hand, we can hear a sweet song in praise of our beloved Creator; on the other, an anguished plea, lamenting our mistreatment of this our common home." 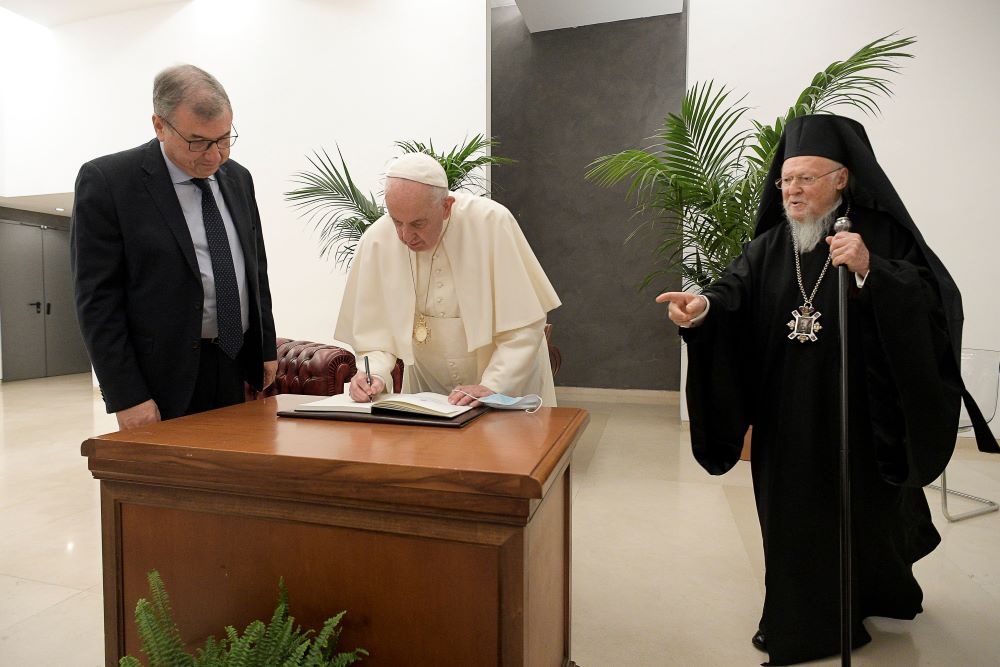 Pope Francis signs documents alongside Vincenzo Buonomo, rector of Rome's Pontifical Lateran University, and Ecumenical Patriarch Bartholomew of Constantinople, at the university Oct. 7, 2021. The event was to launch a new chair supported by UNESCO "On Futures of Education for Sustainability" and a new program of studies in "Care of our common home and safeguarding creation." (CNS/Vatican Media)

The pope said that the "sweet song of creation," which invites people to practice an ecological spirituality attentive to God's presence in the natural world, is "tragically" accompanied by "a chorus of cries of anguish" — from the earth, the poor and Indigenous and young people.

"Listening to these anguished cries, we must repent and modify our lifestyles and destructive systems" with the planet reaching "a breaking point," Francis said.

A virtual interfaith prayer service opened the Season of Creation Sept. 1, featuring Metropolitan Job of Pisidia of the Eastern Orthodox Church; the Rev. Dave Bookless, an Anglican minister and director of theology for the Christian environmental movement A Rocha International; and Salesian Sr. Alessandra Smerilli, secretary of the Vatican's integral human development dicastery.

Smerelli said that the story from Exodus, where God through the burning bush instructs Moses to remove his sandals "for the place you are standing is holy ground" and tells him that God has heard the cries of his people, together recognize the earth is sacred and a reminder that the cries from creation and the poor "is the same cry."

"As warning signs of the ecological crisis continue to ring loud, walking a synodal path is the way of an ecological conversion," she said. "Synodality is not limited to humans working together, but interspecies working and dwelling together within ecosystems in a way that reciprocates respect and upholds the integral dignity of all things." 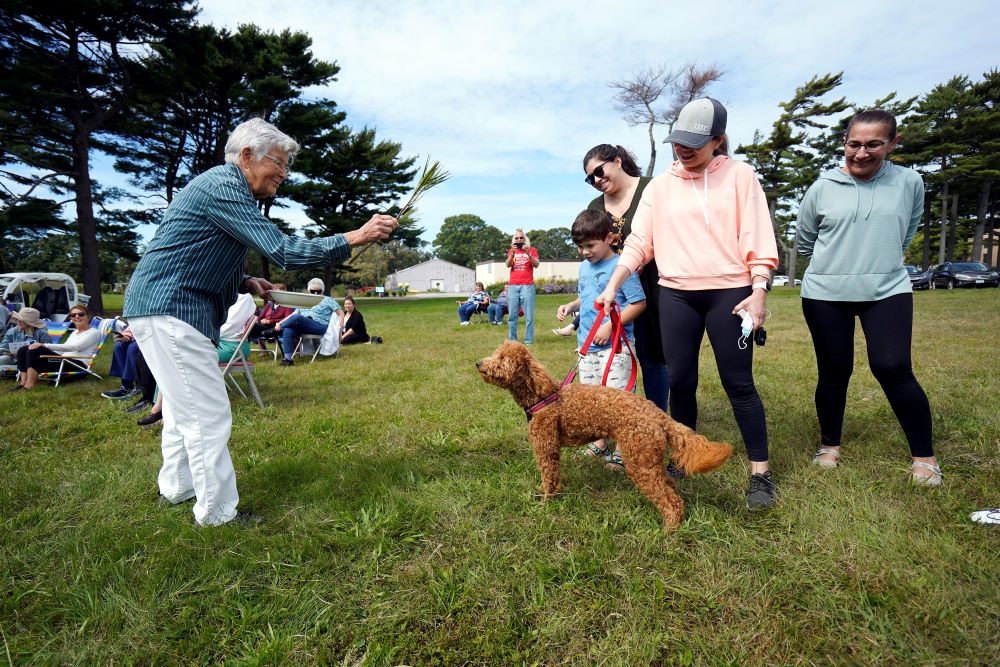 Other Season of Creation events focus on tree plantings, trash cleanups, community gardens, nature walks and rosary prayer services. In addition, the Vatican's integral human development dicastery plans to use the season to encourage more Catholic institutions to join the 4,000–plus that have enrolled in its Laudato Si' Action Platform initiative to implement the pope's encyclical more fully in the global church. Enrollment for the first cohort group closes Oct. 4.

Opening Masses were scheduled in numerous Catholic dioceses, including the Diocese of Lexington, Kentucky, the Archdiocese of Manila, Philippines; the Diocese of Bogor in West Java; and the Johannesburg Archdiocese in South Africa. The Conference of Catholic Bishops of India hosted an online prayer service, while interfaith prayer services were also planned in New England and the Italian city of Bergamo.

Numerous activities during the Season of Creation also focus on two upcoming United Nations summits: COP27 on climate change, in Egypt in November, and COP15 on biodiversity in Canada in December. In his Season of Creation messages, Francis outlined the Catholic Church's priorities for both high-level international environmental meetings and asked for prayers for successful outcomes.

A 15-day climate pilgrimage in mid-September will lead people of faith from Nairobi's Kibera neighborhood, one of the largest slums in Africa, to Mount Kilimanjaro, where glaciers are rapidly melting, in an effort to raise awareness of social and environmental injustices facing Africans ahead of the COP27 climate conference.

The Columbans, an accredited NGO observer to the COP15 U.N. Convention on Biological Diversity, were motivated to restart their podcast, which is available on their website and all podcast platforms, to raise awareness not just about degraded and destroyed ecosystems but how church teaching can help explain what's happening and empower people to make a difference, Cocozello told EarthBeat.

Although climate change can feel like an insurmountable global challenge, every person can address threats to biodiversity in their own backyard, whether restoring wildlife habitats or organizing to protect local watersheds and forests, he said.

"As Laudato Si' says, everybody has a special place in nature that means a lot to them. … So hopefully, the podcast can empower people, or prod people, to say, 'OK, I already care about this and my faith can enrich that relationship and also can help me advocate for its protection,' " Cocozello said.

The Columban official added it was notable the Season of Creation is focusing on listening at the same time the synod on synodality has opened a global listening process within the Catholic Church. For Cocozello, who grew up on Cape Cod hearing relatives talk about fishing not being as good as it used to be, he hears from creation today not just cries of environmental destruction wrought by climate change and human activities, but also an invitation to co-collaborate with ecosystems and non-human creatures to make the planet better for all.