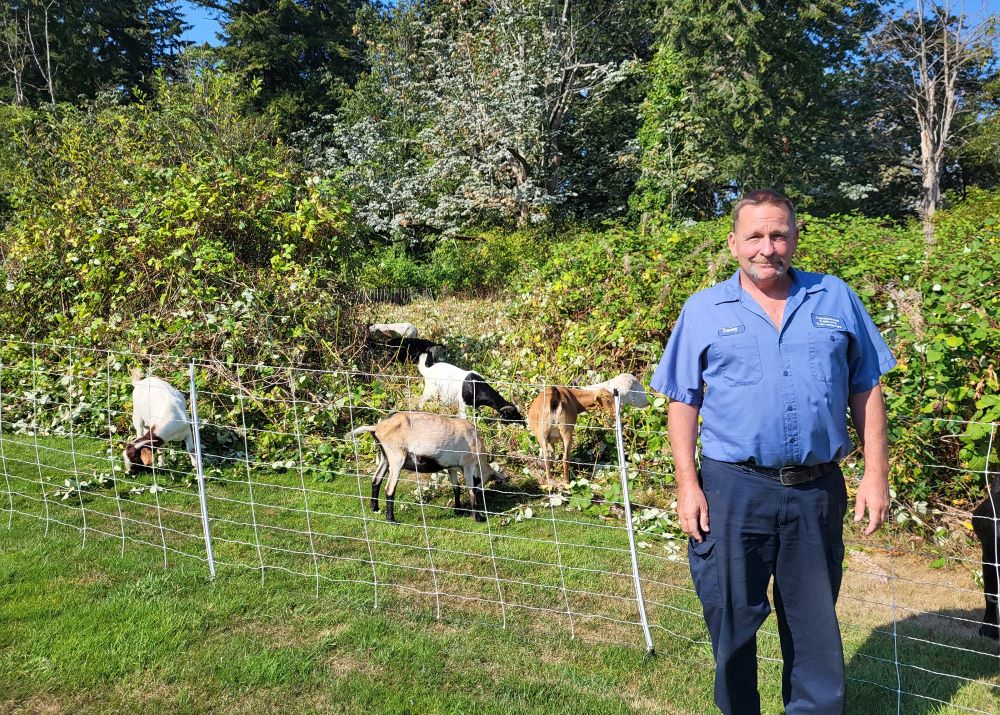 Dan Britton, grounds foreman at Holyrood Cemetery in Shoreline, Wash., is seen with a few of the goats that are busy clearing blackberry vines in an undeveloped area of the 88-acre cemetery. (CNS/Courtesy Holyrood Cemetery via Northwest Catholic )

In the spirit of Pope Francis' call to care for creation, Holyrood Cemetery is using goat power, not gas power, to clear four acres of undeveloped, blackberry-infested land.

"This is a first for the archdiocesan cemeteries," said Rich Peterson, director of Associated Catholic Cemeteries in the Seattle Archdiocese.

In the past, gas-powered machinery would have been used to maintain the wild areas at the 88-acre cemetery, "but in the spirit of being good environmental stewards, we have arranged with a goat herder to hire his goats," Peterson said.

With some environmentally sensitive practices already being used at Holyrood, the trio mulled over "what's an environmentally friendly way get rid of blackberry bushes? As a collaborative, we came up with goats," Lobie said.

She had to pitch the concept to Peterson, who had thought of using goats in the past, so was all for it.

Lobie struck out with the first couple of goats-for-hire businesses she called — they were already booked for this season and next year — but she found a local farm with goats available.

The first 27 goats arrived Aug. 23, with reinforcements brought in a few days later. About a week into the project, the goats had cleared about an acre, Lobie said. By the beginning of September, 50 goats were on-site munching their way through the tangle of vines, leaves and plentiful blackberries, with another 10 days or so of work anticipated.

The finish date is imprecise because "you can't force them," Lobie said. "They move slow or they go really fast."

Far away from any gravesites, the goats roam through areas of blackberry bushes, surrounded by a movable wire fence. The fence, which can deliver a mild electric shock, keeps the goats contained and also protects them by keeping out predators, Lobie explained.

Since the goats arrived, a couple of families visiting loved ones' graves have come into the cemetery office to ask about the animals, she said.

"Of course, all the staff that have small children are super excited," Lobie added.

The cemetery's goat experiment is a response to the focus of "our culture and our Holy Father and our archbishop ... to be more earth-aware," Peterson said.

"Our hope," he said, "is that the goats enjoy the blackberries (and) the cemetery gets these areas cleaned up — all while not adding additional carbon to the atmosphere."