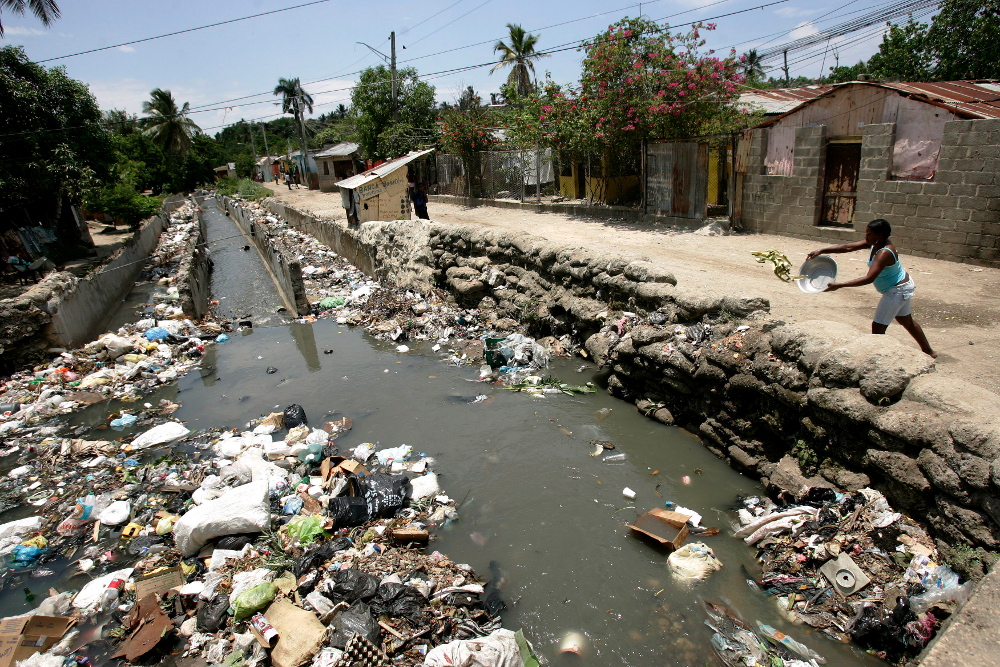 A woman throws rubbish into a stream that crosses the neighborhood La Cienaga, Dominican Republic, in 2009. (CNS/EPA/Orlando Barria)

Five years ago, few people thought of the Catholic church as ecologically activist or environmentally diplomatic. But Pope Francis' election to the papacy changed that, especially since the promulgation of his 2015 ecology encyclical, "Laudato Si', on Care for Our Common Home." In my analysis, fresh water is the most important point of papal reflection at the intersection of environmental and social justice. Fresh water is, in no uncertain terms, a fundamental life issue.

The magisterial Catholic Church has articulated two fulcrums for environmental reflection — theological and ethical — that apply in specific ways to fresh water.

Theologically, water is the matrix of creation, a ritual substance par excellence, and a gift from God intended for the benefit of all people.

Ethically, fresh water is a substance that requires attention to justice: It is the poor and vulnerable who are first and most profoundly affected by lack of sufficient, clean, fresh water.

Francis is surely the most visible, and most recent, authoritative Catholic voice on the topic of the centrality of fresh water to environmental and social justice. Citing his and Pope Benedict XVI's papal precedent, Francis' concluding salvo at a 2017 Vatican-hosted "Dialogue on Water" exhorted:

The questions that you are discussing are not marginal, but basic and pressing. Basic, because where there is water there is life, making it possible for societies to arise and advance. Pressing, because our common home needs to be protected. Yet it must also be realized that not all water is life-giving, but only water that is safe and of good quality — as St. Francis again tells us, water that "serves with humility," "chaste" water, not polluted. All people have a right to safe drinking water. This is a basic human right and a central issue in today's world.

Both Francis and Benedict declared that the fundamental human right to water is a core aspect of Catholic social teaching, which now includes environmental aspects in a central way. The Catholic Church was among the first major international institutions to defend the idea that access to fresh water is a fundamental human right, and it has enshrined this idea in authoritative teachings, such as the 2004 Compendium of the Social Doctrine of the Church, Caritas in Veritate and Laudato Si'.

There is abundant skepticism in Catholic social teaching that the mechanisms of the free market, especially the tendency to treat water as a commodity, are sufficient to ensure just access to fresh water for all. Water is to be seen as a human right precisely because it undergirds all life and is central to human dignity.

The popes also point out that fresh water is essential to the fulfillment of all other rights. More broadly, sufficient access to clean, fresh water is fundamental to the achievement of all manner of public and private goods, such as education, economic activity and social equity.

It's worth noting that the Catholic Church — despite its patriarchal structure, and yet in line with social realities around the world — has noted that gender is a major factor in water and sanitation, for it is often women and girls who bear the burden of procuring water when it is scarce.

Given papal leadership and the powerful tradition of Catholic social teaching, what more might be worth exploring with regard to fresh water? I suggest five aspects that will be important for the church to consider as it deepens its analysis and moral advocacy on the subject of water.

First, individual versus structural responses to water challenges. Fresh water is a reality that is simultaneously hydrological, climatological, social and institutional. The way fresh water flows depends not only on the weather and the water sources in a region, but also on the ways that infrastructure is constructed and access given to some users rather than others, as well as incentives given to some types of water uses over others.

Twenty-first century moral reflection on fresh water requires not just attention to individual practices of conservation, but also to the political and economic frameworks within which fresh water is withdrawn from its sources, valued, exchanged and distributed. The Catholic Church, as a repository of theological insights and ethical reflection, is a needed voice in defending the preferential option for the poor and marginalized.

Second, water and migration. Scientist Travis Huxman points out, "Water is the hammer with which climate change will hit the earth." One way this is visible is with regard to environmental refugees who have left their homes in response to drought, especially in agricultural regions. Given the church's advocacy for displaced persons, it is well-poised to advocate for environmental immigrants to be granted the status of refugees, a status that confers special rights that are more conducive to well-being, especially in an era of migration prompted by water scarcity.

Third, water and sanitation. Scholars recognize that the right to water is deeply interwoven with the right to sanitation for all people, and especially significant for girls and women. How gender, water and sanitation intersect is a crucial topic, and one that the global Catholic church could rightly identify as an equity issue, since women and girls are more negatively impacted by lack of sanitation infrastructure. The church is already an outspoken critic of the fact that upward of 1,000 children die every day due to waterborne, and entirely preventable, deaths. 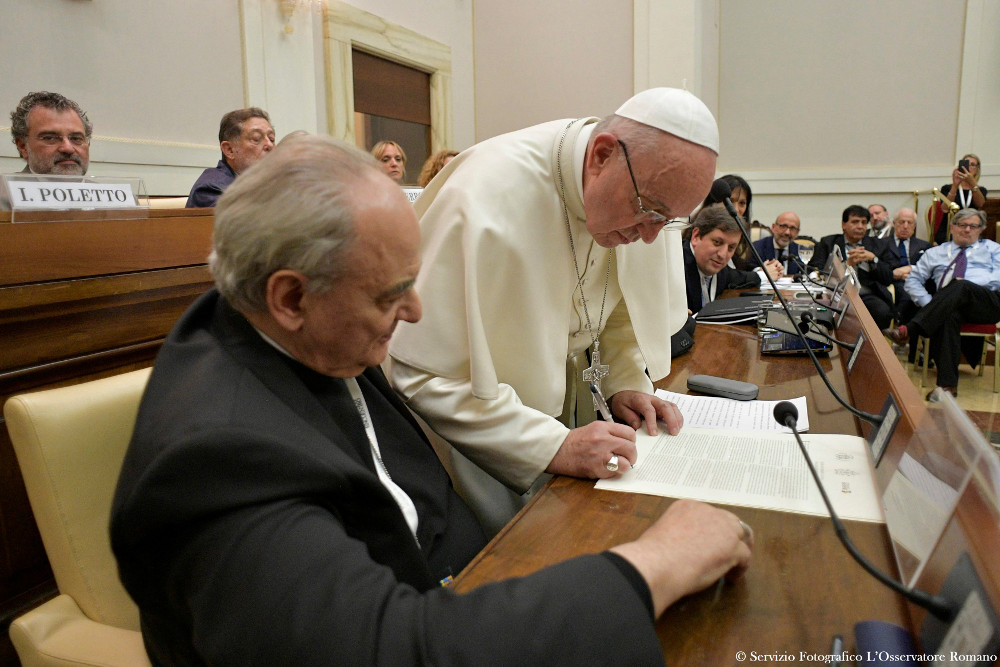 Pope Francis signs a document as he takes part in a "Dialogue on Water" Feb. 24, 2017 at the Pontifical Academy of Sciences. (CNS/L'Osservatore Romano)

Fourth, rights of the environment. Human rights are focused on the human, as the name suggests. But Francis has suggested, since 2015, that there might be a "right of the environment." Is it possible that, given the intrinsic theological goodness of creation, as well as water's centrality to human flourishing, that waters could have rights in themselves, worthy of protection not only for human beings, but also for the life-giving qualities they embody?

Fifth, institutional proof of concept. The Catholic Church as a global institution has surely demonstrated the importance of conceptual leadership on the topic of fresh water and human rights. It also has the potential to demonstrate institutional commitments to best practices regarding fresh water. The Vatican's installation of showers for the homeless in Vatican City is one example of water and social justice.

Multiple orders of women religious worldwide have been at the vanguard of watershed practices and water justice efforts. The church and the world would do well to listen to these women and the truths that they proclaim in daily practice.

[Christina Zenner is an associate professor of theology, science and ethics at Fordham University, where she is affiliated faculty in environmental studies and American studies. She is the author of Just Water: Theology, Ethics, and the Global Water Crisis.]