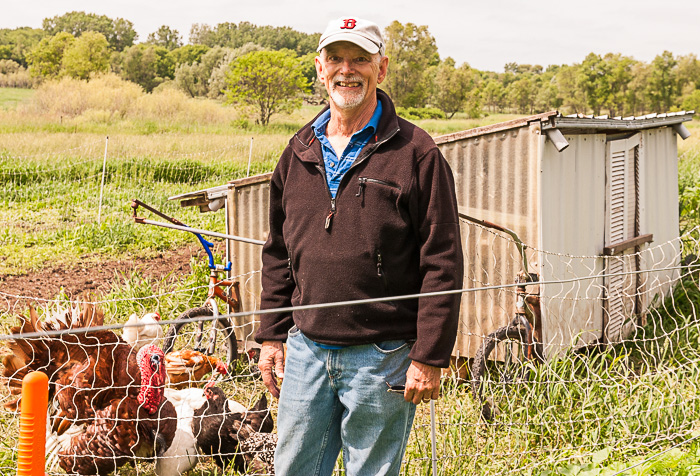 Steve Coleman stands beside his chicken coop on his farm in Madison, Wisconsin. He calls this structure the "chicken mobile," because it is attached to two old bicycles from the Goodwill that allow the coop to be moved from place to place, a practice known as rotational grazing. (Tom Boswell)

If you are going to tackle what may be the biggest problem in the world, it's probably best to take it one step at a time.

Steven Coleman, a retired engineer and lifelong Catholic, did just that. He started with his home, then reached out to his parish, and finally stepped into the national arena and the halls of Congress in his campaign to combat climate change.

All along the way on what he calls his "path," Coleman has relied on the Holy Spirit to guide him. "Ultimately, it's his work," he insists. "All I do is show up and the Spirit does the rest."

Coleman, 71, was employed for over 30 years with the same corporation, working as an engineer, strategic planner, new-venture start-ups leader and acquisitions analyst. In his spare time, he worked as a master teacher for high school and adult education programs at Immaculate Conception Parish in Marlboro, Massachusetts.

When he retired in 2005, Coleman and his family moved to a 72-acre homestead near Madison, Wisconsin. They renovated the farmhouse — over 100 years old — for his daughter Jeanne and her family, and built a stylish addition for Steven and his wife, Kathy.

The new part of the house is passive solar; an array of 35 solar panels heat their water and provide electricity. A massive shed houses two cars, one a hybrid and the other totally battery-operated. Nearly two dozen more solar panels atop the shed provide the power to charge the car batteries during the night. Coleman calculates that the two vehicles travel about 2,000 miles in two months on three gallons of gas.

The family produces about 120 to 130 percent of the energy they need; the local utility buys back the excess. "It is a net carbon-neutral house," Coleman said, a hint of pride in his voice. The farm is organic and they use rotational grazing methods to raise sheep, cattle and chickens.

But five years ago, Coleman reached the conclusion that a sustainable homestead and lifestyle was not sufficient. "I realized that the problem was going to be much bigger than that," he said, "and the solution needs to be much bigger."

He began to pray and then to study. He resolved to become knowledgeable and articulate about climate change, and then "to see what I could do to make a difference."

"The more I read, the more I understood. I was overwhelmed by the size of the problem." He sank into depression. "There was also guilt, all that carbon dioxide that I was putting into the atmosphere was still there," he said.

Soon after, Coleman was introduced to the Citizens Climate Lobby and started to attend their meetings. He credits the lobby with giving him the confidence to use his skills and gifts to make a difference. He decided that talking to those in the church was where his talents fit best.

In May 2014, Coleman approached the Knights of Columbus at St. Dennis, his parish in Madison. He asked to make a presentation on climate change but was told the Knights were booked up for the next nine months. Feeling dejected, Coleman and his wife left to spend the winter in Florida.

A priest at his church in Florida advised him: "When faced with a situation where you don't know what to do, invoke the Holy Spirit to come in, invite him into the problem." The priest taught Coleman the mantra "Come, Holy Spirit, Come."

Coleman prayed and three days later, he got an email saying the Knights could fit him into their schedule the following month.

The presentation to the Knights of Columbus was a success, and 15 people signed up to start a study course. Soon after, Fr. Randy Timmerman, the pastor at St. Dennis, asked Coleman to give the talk again, under the auspices of the parish. Those who had completed the study course helped Coleman organize the presentation and about three dozen people attended. Another study course was held and soon Coleman had 30 or more recruits.

"I sent them an email and said: "Congratulations! You are now the beginning of a Care of Creation Team and you are all members,' " Coleman said. 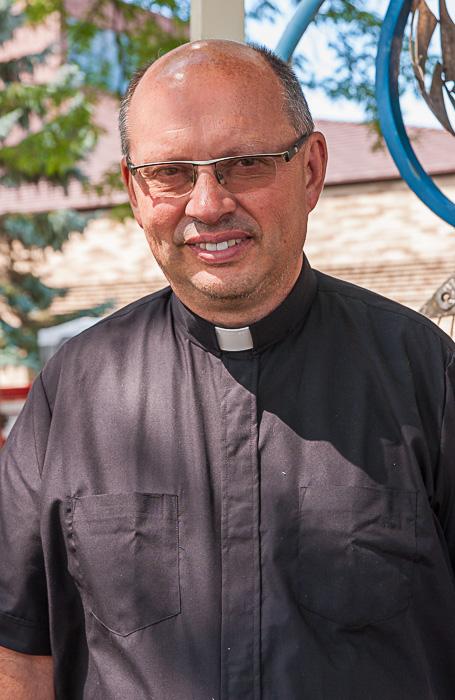 "If we're going to change U.S. social habits, it's going to be through economic means," Coleman maintains. "We have to put a price on carbon. And we have to do it in a way that does not do any harm to low-income people. And we've got to make it bipartisan, so both parties can say 'We can do this, it doesn't violate our basic principles.' "

Coleman is also active with Catholic Climate Covenant, a nonprofit organization formed in 2006 with support from the U.S. Conference of Catholic Bishops. The covenant has 17 national partners including Catholic Relief Services, Catholic Charities USA and Catholic Rural Life. Its focus is to help U.S. Catholics respond to the church's call to care for creation and care for the poor.

This past June, Catholic Climate Covenant announced that nearly 600 U.S. Catholic institutions, including dioceses, communities of men and women religious, health care systems, universities and parishes and schools, had signed the Catholic Climate Declaration. The document affirms that Catholic communities, organizations and institutions "are still in" on actions that meet the climate goals outlined in the Paris Agreement. It is part of the broader "We Are Still In" campaign organized a year earlier in response to the Trump administration's decision to withdraw from the Paris Agreement.

In late June, Coleman attended the annual assembly of the Association of U.S. Catholic Priests in Albuquerque, New Mexico, where the priests in attendance approved a resolution supporting the "Catholics Are Still In" declaration by a vote of 120 to 4. They also ratified an organizational goal declaring care for creation a "life issue" and urging the organization to speak out on reverence for creation in line with Laudato Si'. Coleman led a break-out session at the assembly on the theme of how to talk about climate change in your community.

We have this life from the earth that God has given us and we're diminishing it for the next generation. So it's a phenomenal right to life issue.

"I was very pleased," Coleman reported. "We basically now have a path to communicate with 1,200 priests and encourage them to take a more active role in caring for creation."

Coleman is convinced that a critical first step in battling climate change is just being able to talk about it. "The emotional hurdles of addressing climate change are really important and the church is a beautiful place to allow that to happen. It's a safe place where you can be sad; it's a safe place where you can say: 'This is really discouraging; how do I move forward from this?' "

"If we don't talk about it, there's no way we can deal with it. Here's the thing that's going to totally jeopardize our grandchildren's future and we're not even willing to admit that it exists," he continued. "Let's find the language, let's find the place where we can begin to talk about this problem because, if we don't, we can't get this moment back again. The changes we are making are irreversible. We send that carbon dioxide into the atmosphere, we can't get it back."

Coleman considers climate change a social justice issue because it disproportionately harms people in the poorer nations. He also claims it as a "right to life" issue because it is future generations that will suffer the most.

"We are living off this wonder of creation that nurtures us and sustains us; everything we have is coming out of this storehouse of creation," he said. "And we are leaving that creation, we will leave that creation, in much worse shape than we found it. And the next generation … gets a squandered inheritance. We have this life from the earth that God has given us and we're diminishing it for the next generation. So it's a phenomenal right to life issue for me."

Trudi Jenny, a Citizens Climate Lobby member and an environmental activist at St. Thomas Aquinas Parish in Madison, helped form a Care of Creation Team at her parish and is hoping that Coleman will soon meet with them to share ideas about how to do a solar project.

"We're hoping that St. Dennis will be the model here and that more parishes will pay attention to what they're doing and use them as a resource," she said.

"He is incredibly strategic," she said about Coleman. "He is able to take a very complex issue and boil it down to the nuts and bolts of it. You can actually see the fruit of his prayer. The spirit really does inspire him and his work."

[Tom Boswell is a freelance journalist, photographer and poet living in Madison, Wisconsin.]