Women are disproportionately hurt by climate change and corporate human rights violations throughout the world, according to a new study by Trócaire, the aid and development agency run by the Irish bishops.

Issued last week in Dublin, the study also reports that disasters resulting from climate change are estimated to kill 14 times more women and girls than men and boys.

Titled "Women Taking the Lead: Defending Human Rights and the Environment," the report also indicates that natural disasters increase young girls' chances of being trafficked by up to 30 percent and that women are more likely to experience violence during crisis situations such as natural disasters, wars or forced displacement.

The International Rescue Committee (IRC) estimates that 14 million refugees and displaced women and girls were subjected to sexual violence around the world in 2019.

Trócaire warns in its report that indigenous, environmental and land defenders who challenge corporations and states over destructive developments are facing growing levels of violence and intimidation. It also reports that, of the 137 attacks on women human rights defenders in 2019, almost half were against indigenous women in rural communities.

The abuse of human rights in the pursuit of profit by corporations is a critical injustice, Trócaire warns, highlighting how women are increasingly victims of physical attacks, intimidation, smear campaigns, criminalization and judicial harassment.

At an event marking the release of the report in Dublin last week, Trócaire CEO Caoimhe de Barra said it details the "shocking impact of climate change and human rights violations inflicted upon many women who live in countries where we work."

She added: "Around the world, women face huge risks in standing up for their rights in the face of injustice perpetrated by big business taking advantage of vulnerable communities. The threat of assault and murder is a daily reality for many of these women, who are fighting for their families to live better lives."

She highlighted how women are disproportionately affected by poverty, which is made worse by the effects of climate change on some of the world's poorest people. Developing countries carry about 75% of the cost of the climate crisis, she added, but the poorest populations are responsible for just 10% of global carbon emissions.

Paradoxically, the report highlights how some renewable energy projects are putting additional demands on land and are have become a growing threat to human rights. Forty-seven attacks on human rights defenders documented by the Business and Human Rights Resource Center in 2019 related to renewables. The sectors involving the most attacks last year were mining (143 attacks) and agribusiness (85 attacks).

Sexual violence by security guards in the extractive industry is identified as an endemic problem while criminalization and judicial harassment are commonly used to silence opposition to projects. Other measures including arbitrary arrests, detentions, and strategic lawsuits against public participation (SLAPPs). Almost 250 indigenous Xinka women were criminalized between 2012 and 2017 for engaging in the peaceful resistance to a gold and silver mine in San Rafael, Guatemala, according to the report.

The report's release was attended by Bertita Zúñiga Cáceres, leader of the Civic Council of Popular and Indigenous Organizations of Honduras (COPINH), an organization supported by Trócaire. 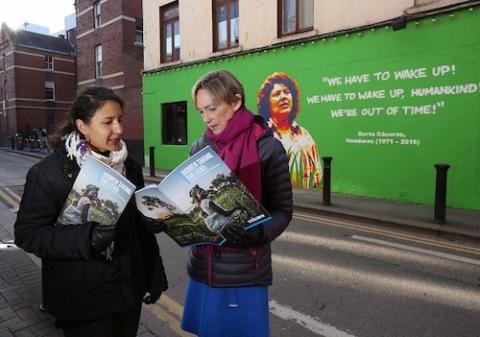 Trócaire's CEO Caoimhe de Barra, right, and Bertita Zúñiga Cáceres, leader of the Civic Council of Popular and Indigenous Organizations of Honduras (COPINH) hold copies of the "Women Take the Lead" report in front of a mural in Dublin of her mother, Berta Cáceres. (Trócaire)

Cáceres' mother, Berta Cáceres, was an internationally renowned activist and winner of the Goldman Prize for environmental defenders. She was shot dead March 2, 2016, after a long battle to stop the construction of an internationally financed hydroelectric dam on the Gualcarque river in Honduras. The river is sacred to the indigenous Lenca people and plays an essential role in agriculture, fishing, and in domestic and recreational activities for them.

In a case study, the Trócaire report highlights how in November 2018 a Honduran court ruled that the murder of Berta Cáceres was ordered by executives of the Agua Zarca dam company, Desa. The court said the company was reacting to delays and financial losses linked to protests led by Cáceres to defend the indigenous territory of the Lenca and its natural resources. Nonetheless, the license for the dam has not been revoked.

Bertita Zúñiga Cáceres spoke at the launch of the report about her community's long struggle to defend its land from corporate abuse. Speaking through a translator, she explained how the problems became more serious after the 2009 coup d'état in Honduras that resulted in a greater number of concessions being issued to corporations in mining, hydroelectric dams and other types of energy generation projects. She said there was also "a huge increase" in the militarization in indigenous territories as well as greater violence and social repression.

"My greatest aspiration as Berta Cáceres' daughter and as coordinator of COPINH, her organization, is that the struggle continues and that this crime does not repeat itself, Cáceres said. 'The situation in Honduras is not unique; this pattern of investment and violence can be seen throughout Latin America and other regions of the world."

Bertita Zúñiga Cáceres supports calls for a binding international treaty on business and human rights to address transnational corporations' liability with respect to human rights and the environment. She believes stronger regulation is needed internationally and nationally to ensure there is justice for affected communities and to limit the damage corporations can do.

"Berta Cáceres is a figure who will always remind us of the struggle for justice and truth," she said.

The report was issued 25 years after the 1995 Beijing Declaration was adopted by 189 governments, committing states to act in 12 key areas, including poverty, power and decision-making, human rights and the environment.

However, less than 13% of agricultural land worldwide today is owned by women, making women more vulnerable to eviction, while around the world they spend a collective 200 million hours every day collecting water. 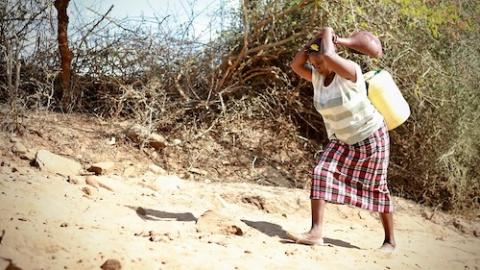 Madris Nginya, a farmer who heads a single parent household of six in Eastern Kenya, carries water for daily use. She is one of the case studies in the report. (Trócaire/Garry Moore)

One of the report's case studies focuses on the plight of Madris Nginya, a farmer who heads a single parent household of six in Eastern Kenya. She has been taught new methods of farming, how to harvest rainwater and how to prevent livestock diseases though a project supported by Trócaire.

However, lack of rains over two seasons left between 1 million to 2 million people in the region in need of assistance over the dry summer months of 2019. Over one third of Kenyans live below the poverty line, and 80% of the country is either arid or semi-arid. Chronic malnutrition rates among children aged 6 to 59 months stands at 26%.

Water is essential for Madris and her family and farm to survive. Getting clean water from a local river is a three-hour round-trip. In the past, she was able to sell her crops and get money to hire a donkey to fetch water. However, with the failed rains she cannot afford this. So now she has to carry barrels of water on her back, using a strap around her forehead.

"Last year I harvested 70kg of mung beans, and this year I harvested only 5kg which is not enough," the report quotes her as saying. The 5kg she harvested only lasted her a month. Due to the drought, her maize crop failed, and she sold the dry remains to cattle farmers to feed their cows. She only made enough from that sale to support her family for one day. 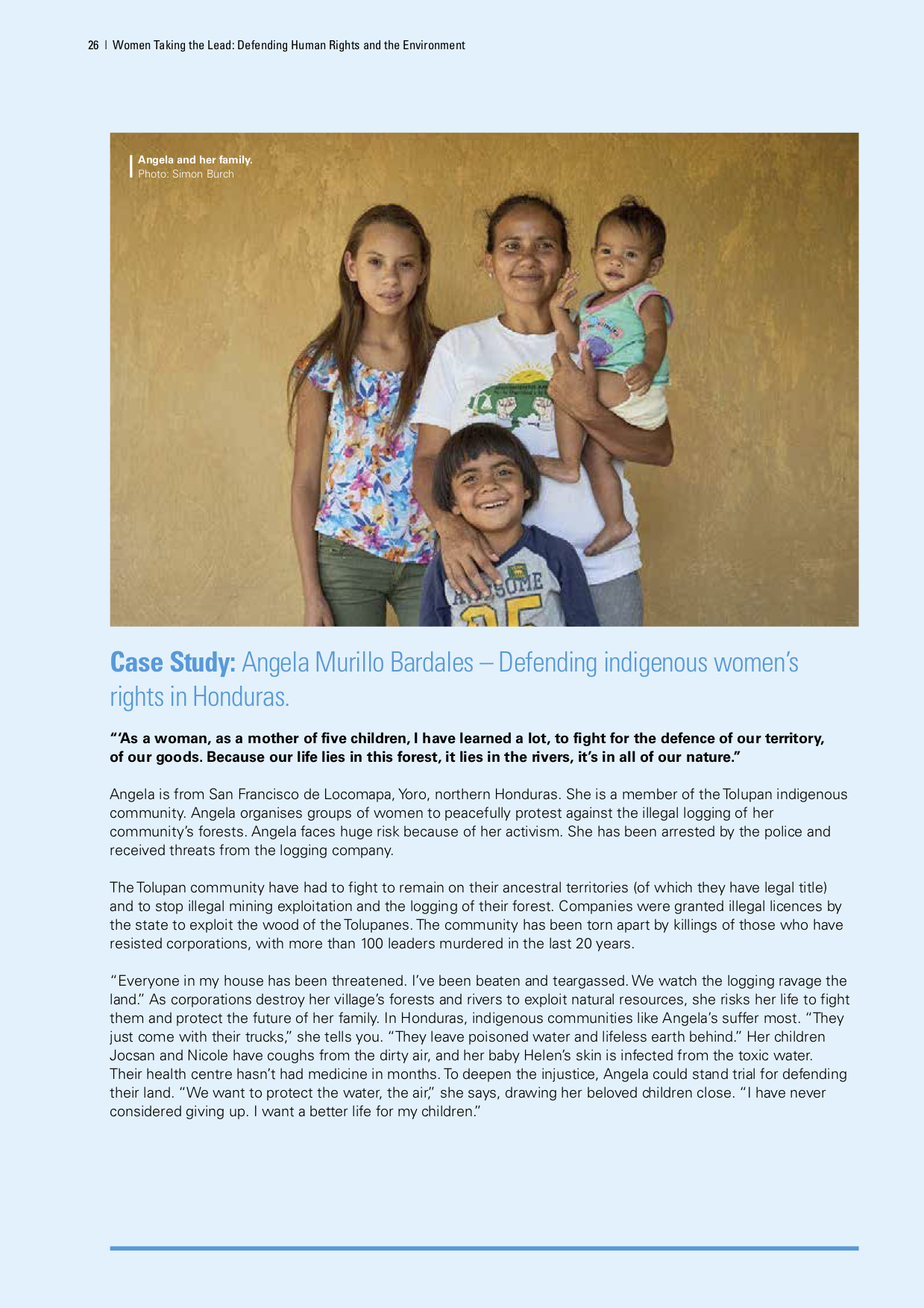 Page 28 of "Women Taking the Lead: Defending Human Rights and the Environment," released in February 2020 by Trócaire

Read this next: Defending her village, consecrated woman lost everything but stopped a dam