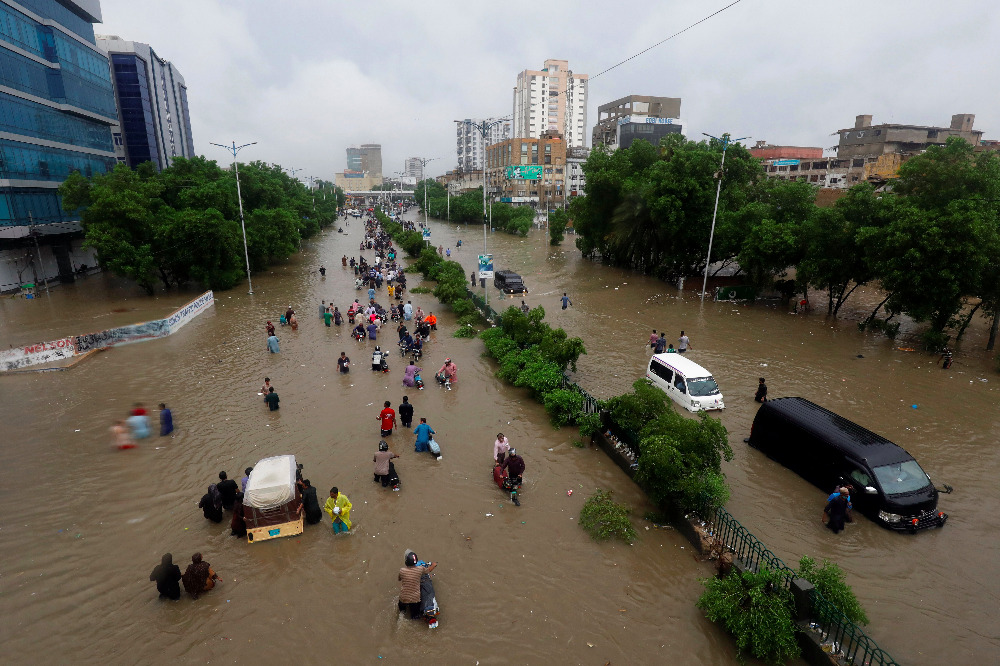 Climate change increases the likelihood of extreme weather, like the rains that caused this flooding in Karachi, Pakistan, in late August 2020. (CNS photo/Akhtar Soomro, Reuters)

The bad news about the climate this month feels oppressive. We know that climate change is expected to bring more frequent severe weather, like hurricanes Laura and Sally, causing deaths, devastating flooding and massive power outages. And we've been warned about heat and drought, which make unrelenting wildfires like those ravaging the western United States — and affecting air quality as far away as the East Coast and Europe — more likely.

All of this is happening amid the coronavirus pandemic, which is linked to climate change in three ways. First, the destruction of tropical forests, which is a major source of greenhouse gas emissions in those countries, creates conditions in which viruses and other pathogens can make the jump to humans. Second, although we all feel the impact of both the pandemic and climate change, they disproportionately affect people of color, interconnecting them as environmental justice issues.

A 2013 study found that nearly two-thirds of greenhouse gas emissions from fossil fuel use, methane leaks and cement manufacturing since the Industrial Revolution originated in just 90 corporations or government-connected industries, and that the top eight companies accounted for a full 20% of the emissions. This summary of the study by Douglas Starr for Science includes an animated graphic showing how those companies' emissions have increased over time.

In the face of overwhelming economic interests, what can we, as individuals, do? Many of us have probably made lifestyle choices — reducing fossil fuel use, cutting back on meat and dairy and lobbying our legislators. But experts say there's another crucial step we can all take to tackle the climate crisis: Talk about it.

"Climate change affects our health. It affects our food and our water, it affects our security, it affects the safety of our homes, it affects the economy, but most importantly it disproportionately affects the poorest and most vulnerable people in the world," climate scientist Katharine Hayhoe, director of Texas Tech University's Climate Science Center, said during a Sept. 14 webinar organized by Interfaith Power & Light and Catholic Climate Covenant.

"For me as a Christian," she added, "I believe not only do we have responsibility for every living thing on this planet, which of course includes our fellow humans, but I particularly believe that we are to care for those less fortunate than us."

For Hayhoe, whose husband is a pastor, the conflict between science and religion that is often brought up in debates has been manufactured by people whose interests lie in maintaining the status quo.

"Climate change shows that we need solutions, and those solutions will alter the balance of power and wealth in this world, because the richest corporations in the world are the ones who are producing all the fossil fuels that we're burning that [are] causing climate change," she said. "So this conflict between science and faith has always been actually between science and power."

But while science clarifies the problems, it's up to us to find the solutions. "That's where our values come in," she said. And that's where we need to find common ground with others.

"If somebody is really obsessed with rejecting climate change and they just can't stop talking about it, we're not going to be able to change their mind, because they're not even going to listen to anything that we say," Hayhoe said. "But we can talk to people who have genuine questions."

They're the ones who are "willing to engage in a two-way dialogue," she added. "So if you feel like somebody is listening to you. and it's a two-way street, so you have to listen to them first. That's when we can have those positive conversations."

Hayhoe dodges one trap often laid in discussions about climate and faith. When someone asks if she "believes" in climate change, her answer is "No."

"Because it's not a religion," she said. "I believe in God. I don't believe in climate change. I know that the climate is changing. I know that humans are responsible, because we've checked every other reason that it could be. And I know that the impacts are serious. And I care about it because of my faith."

That shifts the conversation to different ground.

Hayhoe has other tips for finding common ground for talking with people about climate change. Her passion about her faith, her scientific research and the urgency she feels about the looming crisis comes through clearly when she speaks, and listening to her is a pick-me-up in those moments when it all seems overwhelming.

"Nobody's pro-life if they separate children from their parents at the border, if they put people in cages, if they allow for the destruction of the environment"
— Bishop John Stowe

The November election will be critical for the climate, with impacts that will ripple around the globe. Join us on NCR's Facebook page at 1:30 p.m., central time, on Sept. 30 for a conversation with Thomas Lovejoy, the biologist who coined the term "biological diversity." Lovejoy, who has advised multiple U.S. administrations on environmental and climate policy, warns that we are close to tipping the climate into a perilous cascade of consequences — but we can still take steps to avert the worst.

Families, faith communities and religious congregations worldwide are renewing the face of the Earth during this Season of Creation by planting trees, lobbying legislators and educating or sharing ideas through webinars. What is your group doing? Tell us in 150 words or less in a Small Earth Story.

If you like EarthBeat Weekly, why not share it with a friend? Feel free to forward this newsletter or pass along the link to EarthBeat Weekly on our website. And if you're reading this issue of EarthBeat Weekly in your browser and would like to receive it in your inbox, you can sign up here for weekly delivery.