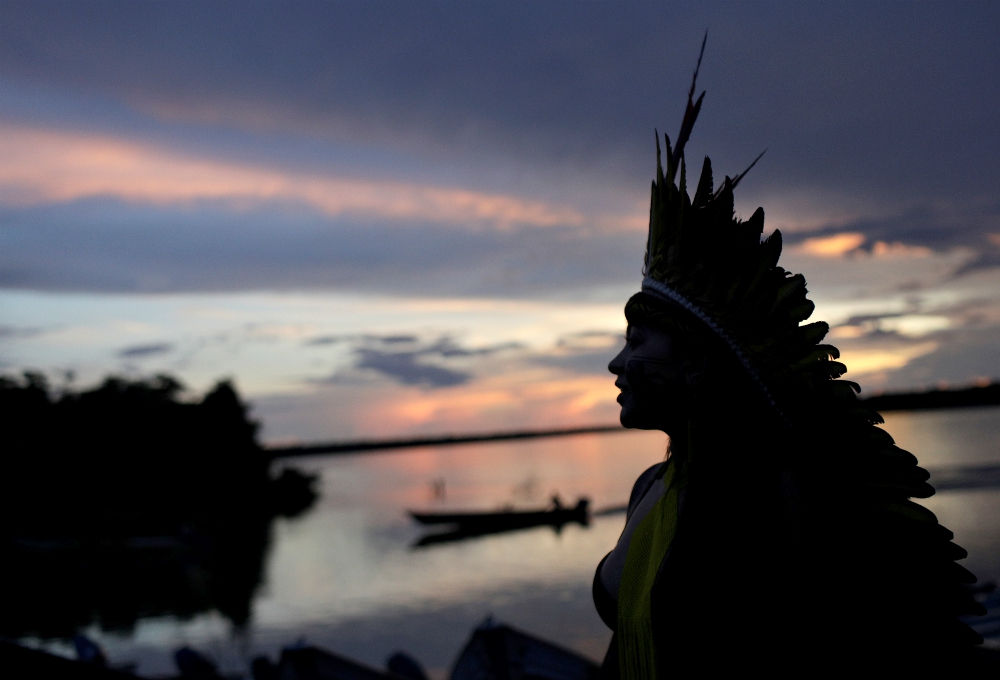 A leader of the Celia Xakriaba peoples walks along the banks of the Xingu River in Brazil's Xingu Indigenous Park Jan. 15. (CNS/Reuters/Ricardo Moraes)

Pope Francis packed a great deal of straightforward and clear advice into the climate encyclical he issued five years ago, challenging as it may be to put that advice into action. But there are also some thought-provoking puzzles that confront us as we dig more deeply into the document, "Laudato Si', on Care for Our Common Home."

In the course of editing a new book, Laudato Si' and the Environment: Pope Francis' Green Encyclical, I had occasion to ponder quite a few such issues, including the following:

I will take these one at a time, briefly mentioning some of the ideas advanced by some contributors to my book.

Responding appropriately both to the cry of the Earth and the cry of the poor is a central theme in Laudato Si'. But responding to both cries may sometimes pull us in different directions.

As people get richer they use more resources, their ecological footprint increases and other forms of life suffer. Poor people need access to electricity and in reality that often means burning fossil fuels. With 7.8 billion people now and close to 10 billion projected for 2050, it is hard to see how massive additional environmental destruction can be avoided if — as also predicted and as current trends bespeak — many poor people become richer.

The pope's vision is for the best-off to bear more of the burden of the worst-off becoming better off. But what if the better-off fail miserably to play their part?

One option would be to say that the climate emergency is now so urgent that under these circumstances, development should be delayed if it will add greenhouse gases.

An alternative would be to say that we should just try to do the best we can in response to both "cries" and not worry too much about tensions between them. In many areas of life we have to navigate our way among competing goods as best we can. Perhaps this is one of those cases.

Darrel Moellendorf addresses this issue in his chapter ("The Cry of the Earth and the Cry of the Poor") in a way he believes to be consistent with Laudato Si'. He argues that climate policy should safeguard the right of developing and least developed countries to sustainable development. Countries must not have their prospects for development diminished as we attempt to address climate change, though we should pursue development in ways that minimize environmental damage. And highly developed industrialized countries must assume responsibility for a transition to a zero-carbon global economy.

In his chapter ("Laudato Si' and Population"), Herman Daly defends robust national boundaries, arguing that these are politically and environmentally necessary and indeed presupposed by the Catholic social doctrine of subsidiarity.

While emphasizing that the rich have a duty to help the poor, including poor migrants, he proposes that rather than open borders and mass migration, what is needed is something along the lines of the Marshall Plan and the CARE packages made available after World War II. He proposes combining such steps with refugee resettlement, urgent steps on the part of the rich to limit their ecological footprint and to live within the carrying capacity of creation — and a shift from a "growth" to a "steady state" economy. 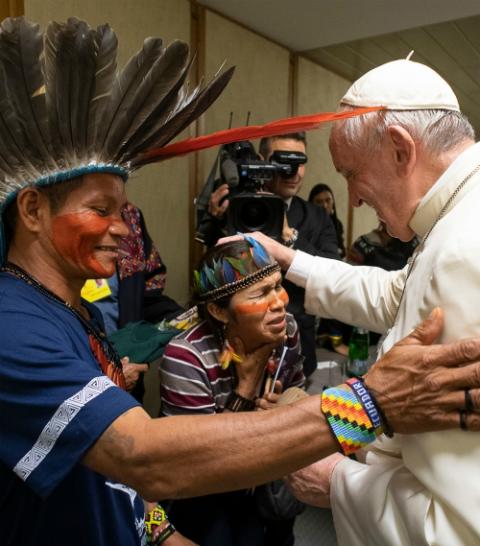 Pope Francis meets indigenous people from the Amazonian region during the Synod of Bishops for the Amazon at the Vatican Oct. 17, 2019. (CNS/Vatican Media)

Drawing on the emphasis on indigenous religious perspectives in Laudato Si', both Celia Deane-Drummond ("A New Anthropology? Laudato Si' and the Question of Interconnectedness") and Zainal Abidin Bagir ("Reading Laudato Si' in a Rainforest Country: Ecological Conversion and Recognition of Indigenous Religions") propose that Christianity would benefit from taking account of indigenous perspectives. Bagir contends that this is also the case for Islam.

Deane-Drummond says that an adequate Catholic theological approach to being human must combine its traditional emphasis on human dignity and human uniqueness with a new appreciation of what anthropology and other fields are teaching us about indigenous religious perspectives.

The challenge both of these authors present us with is how the indigenous ideas in question are to be accommodated theologically.

Margaret Daly-Denton ("Laudato Si' and the Reinterpretation of Scriptures in Light of the Ecological Crisis") considers Francis' use of Scripture in the encyclical and, more broadly, ecological readings of the Bible.

Central to "ecological hermeneutics" is the idea that believers should reinterpret their Scriptures in light of current realities and challenges. She writes about "the meaning that lay thousands of years ahead ... when [sacred texts] were first written, but that jumps off the page when we read them in the twenty first century, standing on our damaged Earth."

Is there an implicit assumption that Christian Scriptures, or other sacred texts, have the wherewithal to address all current and future dilemmas and challenges? How is the line between interpretation and creative reconstruction to be drawn?

Francis exhorts us to respect "the delicate equilibria existing between the creatures of this world." Ecosystems are "good and admirable" and have an intrinsic value independent of their usefulness. 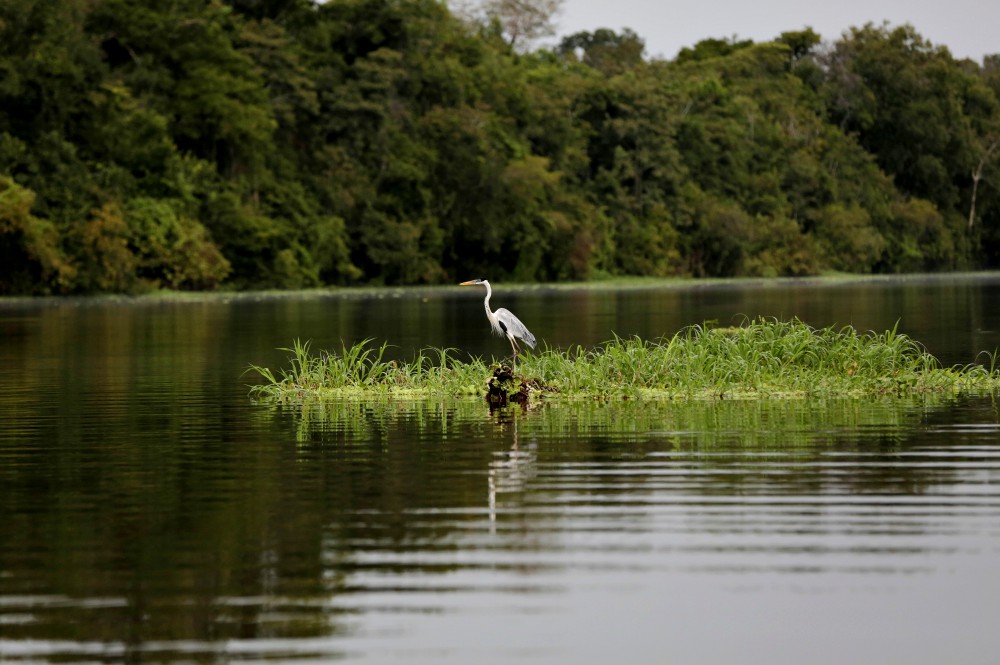 A heron is seen in the Amazon's Mamiraua Sustainable Development Reserve in 2018 in Uarini, Brazil. (CNS/Reuters/Bruno Kelly)

What does this recognition of the value of ecosystems require in terms of behavior? Does it rule out monocultural agriculture and require permaculture? Does it require something as ambitious as the proposal of the eminent biologist Edward O. Wilson, who calls on humans to set aside approximately half the planet as a permanent preserve, relatively undisturbed by human activity? Wilson says that drastic emergency action on this scale is necessary to protect Earth's biodiversity.

I touch on such questions in my own chapter ("Opposing the 'Technocratic Paradigm' and 'Appreciating the Small Things.' ") And Eric Freyfogle ("Laudato Si' and Private Property") probes the implications of what the encyclical says about the value of various aspects of the world around us, including ecosystems, for how we understand what it is to own something.

Francis points out that on many issues dealt with in Laudato Si', there can be honest debate among the advocates of divergent views. And he repeatedly advocates dialogue. It is in the spirit of these injunctions that I identify some themes that merit additional reflection.

On the other hand, it requires nothing more than paying a little attention to see that our common home is falling into disrepair. And there can be no debate about the wisdom of cultivating a "simplicity which allows us to stop and appreciate the small things, to be grateful for the opportunities which life affords us, to be spiritually detached from what we possess, and not to succumb to sadness for what we lack."

[Robert McKim is emeritus professor of religion at the University of Illinois and editor of Laudato Si' and the Environment: Pope Francis' Green Encyclical.]