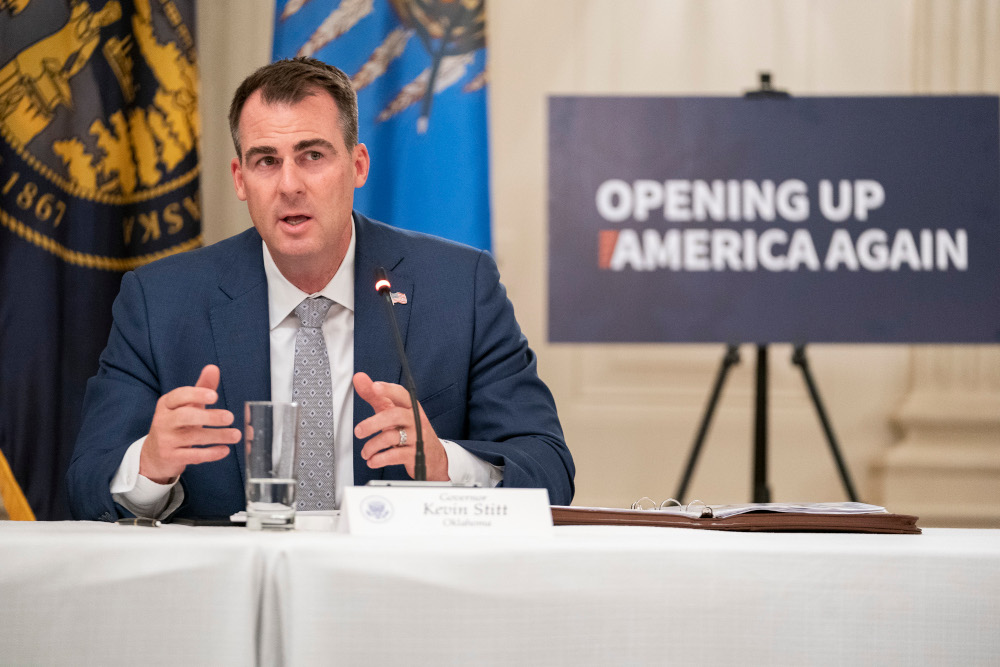 Oklahoma Governor Kevin Stitt address his remarks during a roundtable discussion with Governors and small business owners on the reopening of America’s small businesses Thursday, June 18, 2020, in the State Dining Room of the White House. Stitt has asked the EPA to give his state jurisdiction over environmental regulations on Native American reservations (White House/Shealah Craighead)

Editor's note: This story originally appeared in The Young Turks, and is republished here as part of Covering Climate Now, a global journalism collaboration strengthening coverage of the climate story.

Gov. Kevin Stitt (R-OK) has asked the EPA to give his state jurisdiction over environmental regulations on Native American reservations. This would include regulating fossil fuels, a multi-billion dollar industry which donated $239,102 to Stitt this election cycle.

This move could destroy opportunities for tribal leaders to reduce pollution and fossil fuel dependency in the eastern half of Oklahoma, effectively thwarting July's Supreme court ruling giving the tribes sovereignty over the vast area.

Stitt revealed his EPA request in a little-noticed webinar hosted by the Oklahoma Farm Bureau, a farming trade group. The farm bureau's president, Rodd Moesel, noted that in 2005, Sen. James Inhofe (R-OK) attached a midnight rider to an appropriations bill, creating a federal law that the EPA must regulate environmental issues on the state’s tribal land or, if requested, the state of Oklahoma gains regulatory control.

In the Aug. 3 webinar, Stitt explained, "The EPA will regulate environmental issues. That's good and bad. It’s good right now with President Trump's environmental folks at the helm. And could be bad if there’s a switch in the administration."

What Stitt considers a "good" EPA, during the Trump Administration, rescinded some 100 regulations governing vehicle and power plant exhaust, mercury and carbon tetrachloride poisoning, water and air pollution, and drilling on federal lands and waters.

In the following exchange, Stitt confirmed that he had already asked Wheeler to use the midnight rider's authority to give regulatory control to the state:

Stitt: … that's what the safety is, something that Inhofe got across the finish line for us.

Moesel: And it had a provision, I think, that gave the state — if there was a change in the sovereignty rulings — to request the ability for the state to administer environmental rules within the Indian Territory…And that‘s essentially the request I think you just made to Mr. Wheeler who heads the EPA and to give the state that regulatory authority, if I understand correctly.

Shortly after the ruling, Stitt had said publicly and repeatedly that he intended to work with his state’s Native Americans on the jurisdictional issues. "I respect and recognize the sovereignty of every Tribe in Oklahoma and look forward to working with every Tribe to ensure that we meet our shared economic, security and social goals," he said in a press release two weeks prior to the webinar.

And during the webinar, Stitt pointed to his own Cherokee roots. "I'm so appreciative of our heritage, our Native American heritage in Oklahoma. I'm a member of Cherokee Nation, and my grandparents grew up in Skiatook, Oklahoma. So eastern Oklahoma is where I'm from and, and so, so appreciative."

But moments later he said what may have begun as a Freudian slip, "I don't want. I want tribes to be very successful, but not at the expense of non-tribal businesses."

Later Stitt said about the Supreme Court ruling, "The problem is a couple of the chiefs I've talked to think it's fantastic, it's a great, it was a great day for their people. It validated what they've always believed: That they're sovereign over this jurisdiction, so they don't see any need for, for a congressional fix or federal legislation to fix anything. They're happy to have us [conduct] government-to-government negotiations."

So Stitt has asked the EPA to turn over regulation of environmental issues on Reservation land to the state agency, which must be done because of the federal rider Inhofe maneuvered in 2005.

Will the EPA agree? Consider this: Andrew Wheeler, the present EPA administrator worked 14 years as an aide to Inhofe, who maneuvered that federal rider stealing tribal rights to environmental regulations on reservations.

And denying tribes environmental jurisdiction could be a major boon to the fossil fuel industry, hurting now because of the pandemic slowdown. Although some tribal leaders may be inclined to pursue much-needed revenue from pipelines and drilling, others favor stricter measures, such as a ban on fracking.

Stitt’s remarks came just two weeks after Inhofe, like Stitt, pledged to work with the tribes. Inhofe said that, "working together as neighbors" with tribal leaders, he would help craft legislation to clarify the Supreme Court’s landmark July 9 ruling. After tribal leaders, who bitterly recall his 2005 midnight rider, reportedly warned Inhofe against pushing through "destructive legislation," Inhofe suggested no new laws were imminent.

Inhofe, who did not respond to a request for comment, is a long-time oil champion and climate change denier. He said in his July 20 press release, "We look forward to working with the Tribal Nations, the state, and all stakeholders, to develop a legislative framework that honors tribal sovereignty."

Neither Stitt nor the EPA responded when asked whether Stitt contacted Wheeler. 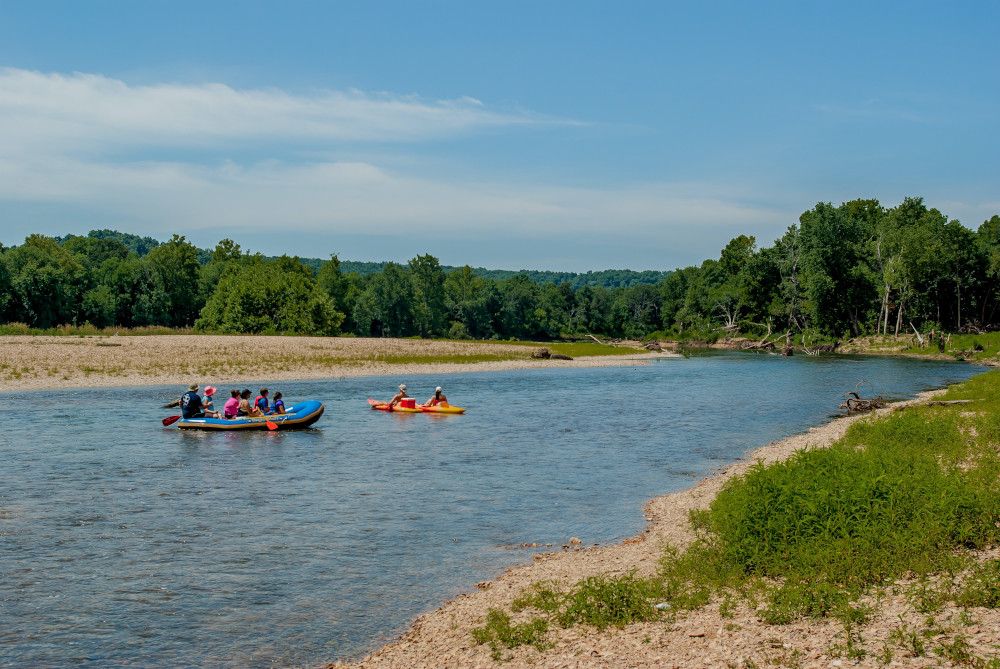 People raft and kayak in the Illinois River in northeastern Oklahoma. In July 2020, the Supreme Court legally affirmed that most of eastern Oklahoma is still various Native American reservations in McGirt v. Oklahoma. (Unsplash/Rod Ramsell)

In the eastern half of Oklahoma, there’s a common expression: "This is Indian Country." Native Americans, an estimated 9.3 percent of the state’s population, live primarily in the rural areas here and, in a few suburbs of Tulsa, intermingled with white Oklahomans. There are few border markers declaring a reservation. The most obvious indication of tribal land might be a gasoline station with signs in English and perhaps Cherokee along with a slot machine in the back. Even in this pandemic, Oklahoma’s 71,000 slot machines and 102 casinos provide the bulk of the income needed to fund tribal services like police and fire departments.

In July, the Supreme Court legally affirmed that most of eastern Oklahoma is still various Native American reservations. McGirt v. Oklahoma gave Jimcy McGirt, a state-convicted pedophile, the right to a federal trial. As a citizen of the Muscogee (Creek) Tribe, whose crime occurred on tribal land, his lawyers argued he was not under Oklahoma’s jurisdiction.

History: The Trail of Tears

The high court cited 1833 treaties between the United States and five tribes as sovereign nations. These treaties guaranteed the land to the tribes. The tribes were forced to march thousands of miles to Oklahoma from their ancestral lands in southern states including Georgia, Alabama, Florida, and Mississippi. Many died in this brutal mass relocation, known as The Trail of Tears. It was ordered by then-President Andrew Jackson, who signed the 1830 Indian Removal Act. Referred to as the Five Civilized Tribes — Muscogee (Creek), Cherokee, Chickasaw, Choctaw and Seminole — their lands were confiscated to grow lucrative cotton crops using slaves.

The new war in Oklahoma

Last month’s Supreme Court ruling pits Oklahoma’s white ruling class against these five Native American tribes. The high court ruled that they are still legal sovereign nations, governing most of eastern Oklahoma. What was three million acres under tribal and federal jurisdiction reverted back to the original 19 million acres. Beyond criminal law, this has become a battle for the economic control and self-determination of the eastern half of the state and sent shock waves still reverberating through the state. In one fossil-fuel industry publication an oil executive was said to be "worried that tribes could impose new taxes or environmental restrictions on developers." Potentially billions are at stake and could mean tribal or federal regulations for oil and gas facilities that in Oklahoma previously have had few restrictions. A conservative think tank described it as, "chaos." 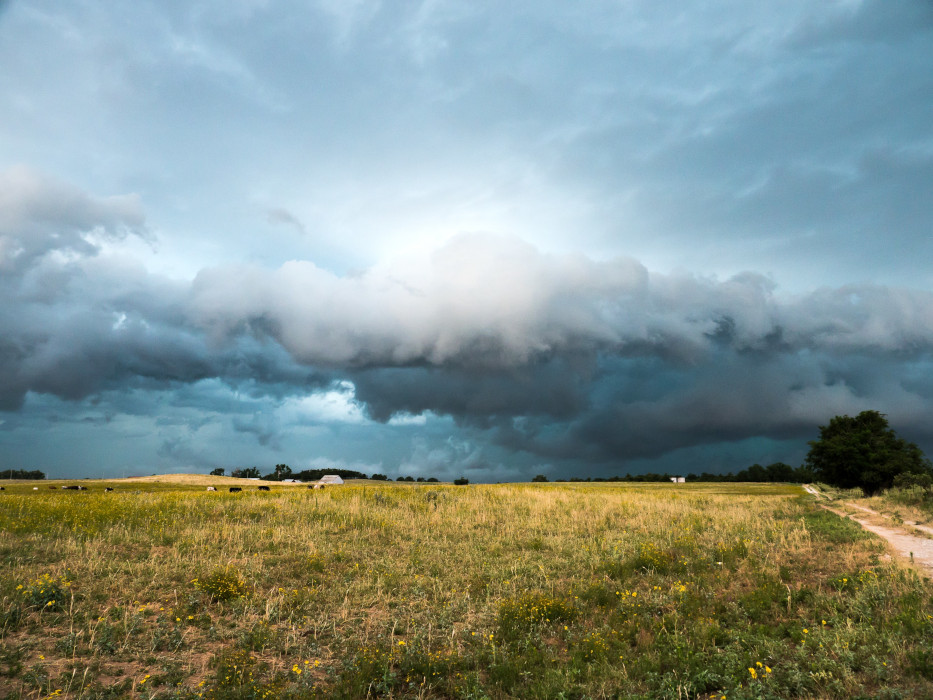 A storm builds over farmland in Oklahoma. Native American environmentalists believe the Supreme Court ruling on the Muscogee Tribal sovereignty provides an opportunity to move the state to a more sustainable, less polluted future. (Unsplash/Raychel Sanner)

Before the pandemic, Oklahoma was America’s fourth-largest producer of oil and gas. Now, though, Native American environmentalists believe the Supreme Court ruling on the Muscogee Tribal sovereignty provides an opportunity to move the state to a more sustainable, less polluted future.

Oklahoman activist Ashley Nicole McCray said before the McGirt ruling that "recognizing tribal sovereignty can benefit everyone. [Tribes] have banned fracking, wastewater injection, and have passed the Rights of Nature within their original tribal jurisdiction." Now she believes the fossil-fuel infrastructure of Oklahoma’s powerful will try to crush McGirt’s green possibilities, and fears that some tribes will be bought off, because revenues to fund tribal services are so low during this pandemic. Revenues paid Oklahoma from Tribal casinos are down 55 percent from February through July 2020.

There is potential for a green future. According to the U.S. Energy Information Administration, tribal governed areas of Oklahoma have the highest potential for renewable energy development. The state’s wind farms already generate 35 percent of Oklahoma’s electricity, although coal and oil are still the top energy sources.

McCray, who is Absentee Shawnee & Oglala Lakota, works with the activist group Indigenous Environmental Network. She ran for Oklahoma’s Corporation Commission (it regulates oil, gas and agriculture in the state); protested the Dakota Access Pipeline; and addressed the Youth Council during the virtual Democratic National Convention as an advocate for the Green New Deal.

In Oklahoma, she told TYT, she expects "wheeling and dealing by people in power, since oil and gas own our legislature and probably our federal reps as well. It’s a consideration we have to be prepared for."

Oklahoma’s "people in power" did immediately scramble to respond to the McGirt decision.

Within a week, Oklahoma Attorney General Mike Hunter announced a temporary agreement with the five tribes. The next day, two of the five tribes denied they agreed. Now all five tribes want a review before signing a new agreement.

Within two weeks of the ruling, Stitt set up the Oklahoma Commission on Cooperative Sovereignty to study the impact of the Supreme Court's decision and the "uncertainty for many Oklahomans in numerous areas of life and law."

Chaired by Larry Nichols, co-founder of Devon Energy, a multibillion-dollar oil and natural gas company based in Oklahoma City, the commission includes oil billionaire and big Trump contributor Harold Hamm. Also appointed were legislators, attorneys, and agriculture business owners, but in a clear indication of the commission’s goals, it does not have a single tribal member.

In response, the chiefs of both the Cherokee and Muscogee (Creek) Nations formed their own separate commissions to deal with the potential consequences of the McGirt decision.

The economic stakes are high. In the eastern half of Oklahoma, roughly a quarter of Oklahoma’s oil and gas wells plus some 60 percent of its refinery capacity could now be under federal or Tribal jurisdiction. The pipelines moving crude oil to and from Oklahoma crisscross the new reservation borders. And the largest private America oil storage facility is located in Cushing on tribal land.

[TYT Investigative Reporter Ti-Hua Chang is an award-winning journalist who has worked for CBS News and other outlets. You can find him on Twitter @TiHuaChang.]