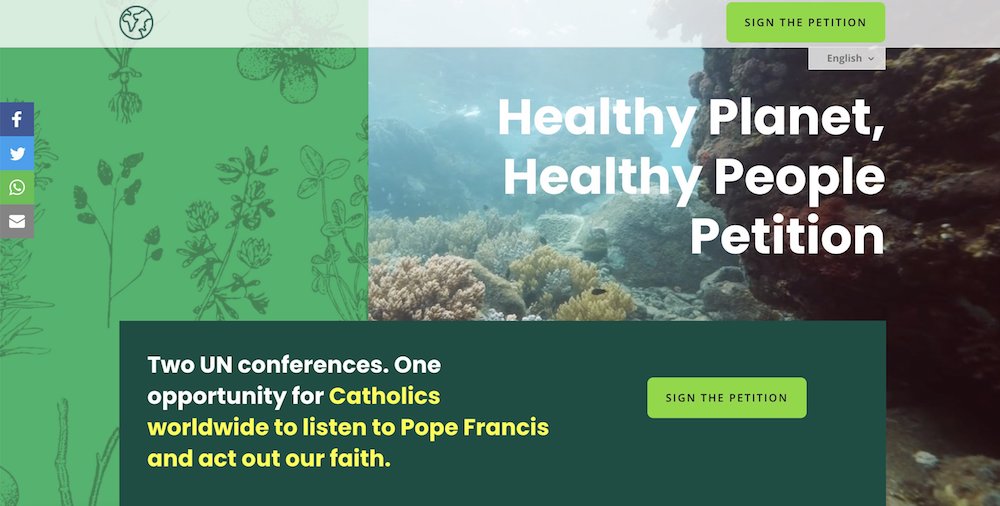 With global leaders meeting in the fall for two critical U.N. conferences — one on climate change and the other on biodiversity — the Global Catholic Climate Movement is sponsoring an online petition calling on them to take action and support a healthy planet and healthy people.

The petition, at thecatholicpetition.org, was unveiled May 17 as part of Laudato Si' Week, which is being celebrated May 16-26 with online and local events worldwide.

This year "is such a critical year ... and action is needed at all levels and action is possible at all levels," Christine Allen, director of CAFOD, the Catholic aid agency for England and Wales, said during a webinar May 17 on "Critical Opportunities in 2021 to Create Change."

"Ahead of those meetings, it is our responsibility as Catholics to lift up the voices of the most vulnerable and advocate on their behalf. We must act now," the petition says.

The Healthy Planet, Healthy People Petition "calls for world leaders to address the climate and biodiversity crises together" in a way that fosters equity, protects people's rights, especially the rights of indigenous peoples and local communities, Allen said.

The petition brings the Catholic perspective to global leaders by advocating an integral approach to healing and preventing current crises and safeguarding humanity's common home.

"As a faith community, we know 'that there is always a way out, that we can always redirect our steps,'" the petition says, citing Laudato Si'.

"With Pope Francis leading us, we pray that you and all political leaders throughout the world, who are tasked with the duty to make life-saving decisions in this critical year, will bring us out better from the COVID-19 crisis toward an equitable common home for all life, for generations to come," it says.

It asks leaders to "urgently affirm the Paris Agreement to limit warming to 1.5 degrees Celsius, and to a new biodiversity global goal of 50% conservation of lands and waters, and restoration and sustainable management of all the rest of land and water bodies to ensure no more biodiversity loss" as well as "agree to reform the financial system and cancellation of debt, so that all countries can restart economies that work for all peoples and the planet."

With the support of the Vatican Dicastery for Promoting Integral Human Development, a series of webinars is being held each day at laudatosiweek.org to look at progress made since the encyclical's release in 2015 and to keep inspiring people to continue the journey of caring for creation.

Besides Allen, the May 17 webinar included Fr. Augusto Zampini, adjunct secretary of the integral human development dicastery; José Gregorio Díaz Mirabal of COICA, a network of Indigenous organizations in the Amazon Basin; and Ditebogo Lebea, a youth climate activist from South Africa.

The speakers said it was important for Catholics to engage discussions around the climate and biodiversity COPs and to promote an integral ecology approach to policy negotiations. Allen recalled how leaders at COP 21, the 2015 U.N. meeting that produced the Paris Agreement, talked about the moral imperative of addressing climate change — a stark contrast to past meetings, and one attributed to Pope Francis and Laudato Si', as well as other faith statements issued before that gathering.

Zampini said the church's role is to help world leaders to recognize how various problems are interconnected, and addressing them requires changes to development models and lifestyles. "That is far, far, far easier," he added, "than to recreate biodiversity and God's creation."

"Let's be realistic: If we don't achieve the 1.5 [target], the world as we know it will be totally different. We have never lived as human beings in that world. And it would be terrible," Zampini said.

Gregorio denounced a policy gaining traction among governments to conserve 30% of biodiversity, saying it should be at least 50%, and in the Amazon as high as 80%. He asked Catholics to urge their governments and churches to listen to Indigenous solutions for preserving creation, and to press developed nations to stop using oil and coal and abandon development models that are destroying their communities and the rainforest.

Lebea said a role religious groups can play is to ensure that all voices — including Indigenous, youth, farmers, rural communities — are not just present as stakeholders but play an active role in decision making about the future of the planet.

"We are full of ideas," she said of young people in particular. "We are here and we are ready to work."