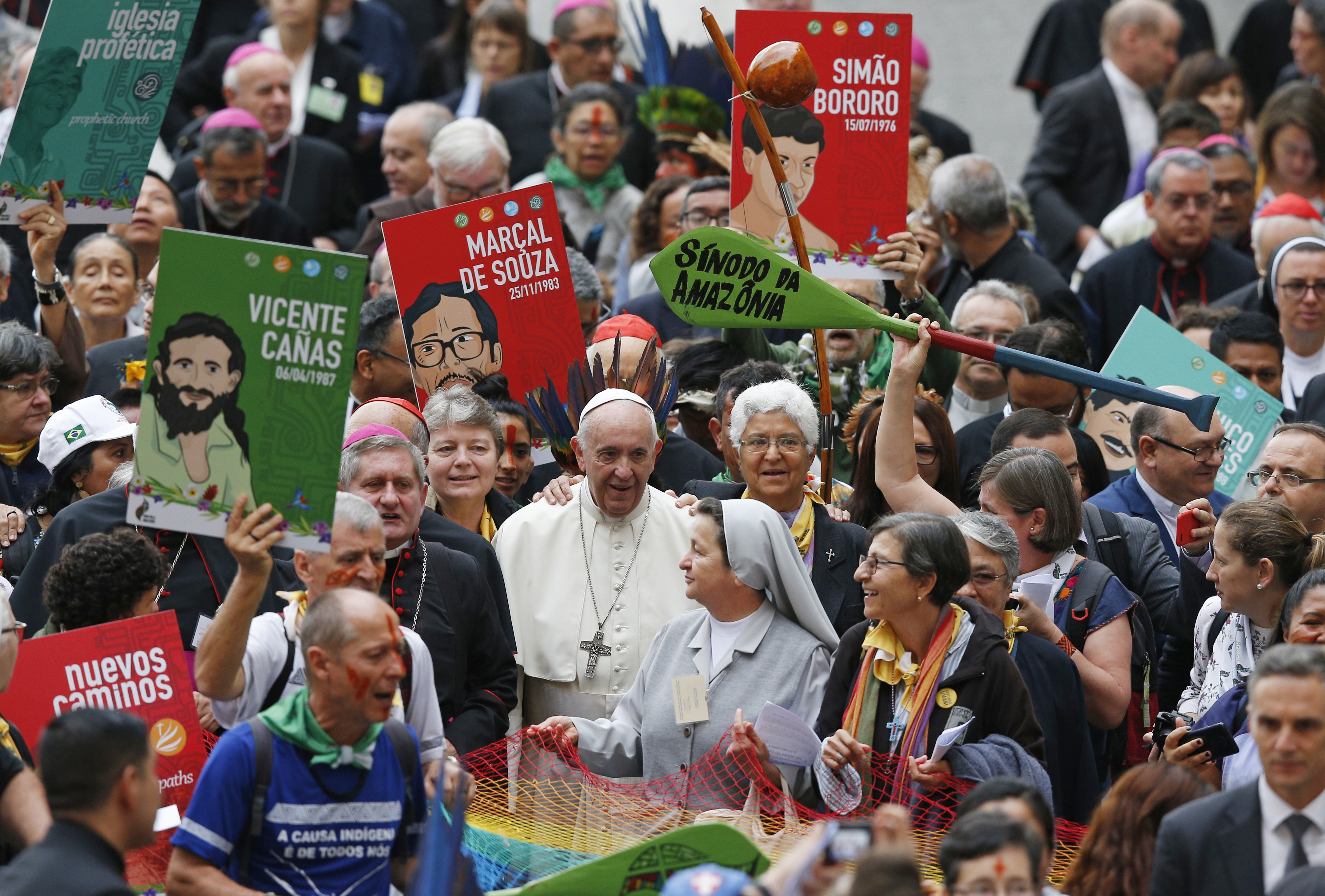 Pope Francis walks in a procession at the start of the Synod of Bishops for the Amazon at the Vatican in this Oct. 7, 2019, file photo. (CNS photo/Paul Haring)

The Vatican's peace and justice office is inviting Catholic communities across the world to join a grassroots movement to gradually work toward "total sustainability" in the coming decade, a path that would include carbon neutrality, simpler lifestyles and divestment from fossil fuels.

The initiative was revealed May 16 by the Dicastery for Promoting Integral Human Development as part of a "special anniversary year" planned for Pope Francis' 2015 social encyclical, "Laudato Si', on Care for Our Common Home."

The news came on the first day of Laudato Si' Week, a Vatican-sponsored event running through May 24, the encyclical anniversary date. Now the week will kick off a full calendar of events through May 24, 2021.

As part of those plans, the dicastery outlined a multi-year "Laudato Si' Action Platform" that in gradual stages will invite Catholic dioceses, religious orders, schools and other institutions to publicly commit to a seven-year journey toward ecological conversion and "total sustainability." The hope is by starting small, the movement will eventually reach a "critical mass" with more and more corners of the church taking part over time.

The action platform is framed across seven "Laudato Si' Goals" grounded in the encyclical's concept of integral ecology. The holistic goals reflect the gamut of Catholic social teaching, and each lists examples of various benchmarks to accomplish.

Among the roughly two dozen benchmarks are becoming carbon neutral, defending all forms of life, adopting simple lifestyles, promoting ecologically centered liturgical celebrations and educational curricula, and divesting from fossil fuels and other economic activity harmful to the planet or people.

The action platform would begin in early 2021 by inviting an unspecified number of initial participants. The official launch is scheduled for the following May. At this stage, the platform remains an invitation, and no participants have been announced.

Participants would represent seven categories (families, dioceses, schools, universities, hospitals, businesses, farms, religious orders) and would commit to complete the goals in seven years. The dicastery said it hopes the number of participants in each group would double with each successive year. The rollout would continue through 2030.

"In this way, we hope to arrive at a 'critical mass' needed for radical societal transformation invoked by Pope Francis in Laudato Si'," the dicastery document states.

Salesian Fr. Joshtrom Kureethadam, coordinator of the dicastery's ecology and creation sector, told EarthBeat in an email May 17 they decided on a grassroots approach for the action platform as a way to reflect the vision of integral ecology outlined in Laudato Si'.

"Our wider horizon is the next decade and beyond when we hope to inspire a people's movement from below for creation care, in the spirit of the integral ecology of Laudato Si', and inspired by the leadership of Pope Francis," Kureethadam said.

It was not immediately clear from the document to what level the Vatican City State would participate in the action platform.

The question of the Vatican's possible financial holdings in fossil fuels has percolated among Catholic and other climate activists. So far, the Vatican Bank has not addressed the issue directly. In that time, more than 160 Catholic institutions, including Caritas Internationalis, have pledged to divest from the fossil fuel industry.

Catholic climate leaders have long spoken about the massive potential for the church to be a major force in addressing global warming by mobilizing the world's 1.2 billion Catholics, roughly 15% of the global population, and leveraging its enormous property footprint. With the Laudato Si' Action Platform, the Vatican appears to invite the church to do just that — and at a critical stage for the future of the planet.

In the Laudato Si' year anniversary plans, the integral human development dicastery, led by Cardinal Peter Turkson, states that the multiple "cracks in the planet" — melting Arctic ice caps, wildfires in the Amazon and Australia, extreme weather and biodiversity loss — "are too evident and detrimental to be ignored any more."

It adds: "We hope that the anniversary year and the ensuing decade will indeed be a time of grace, a true Kairos experience and 'Jubilee' time for the Earth, and for humanity, and for all God's creatures."

In the Book of Leviticus, a jubilee year occurred every 50 years, or "at the end of seven weeks of years," and was a sacred period of restoration with prisoners freed, debts forgiven and the land left fallow, free from sowing or reaping. "The land will yield its fruit and you will eat your fill, and live there securely." (Leviticus 25:19) 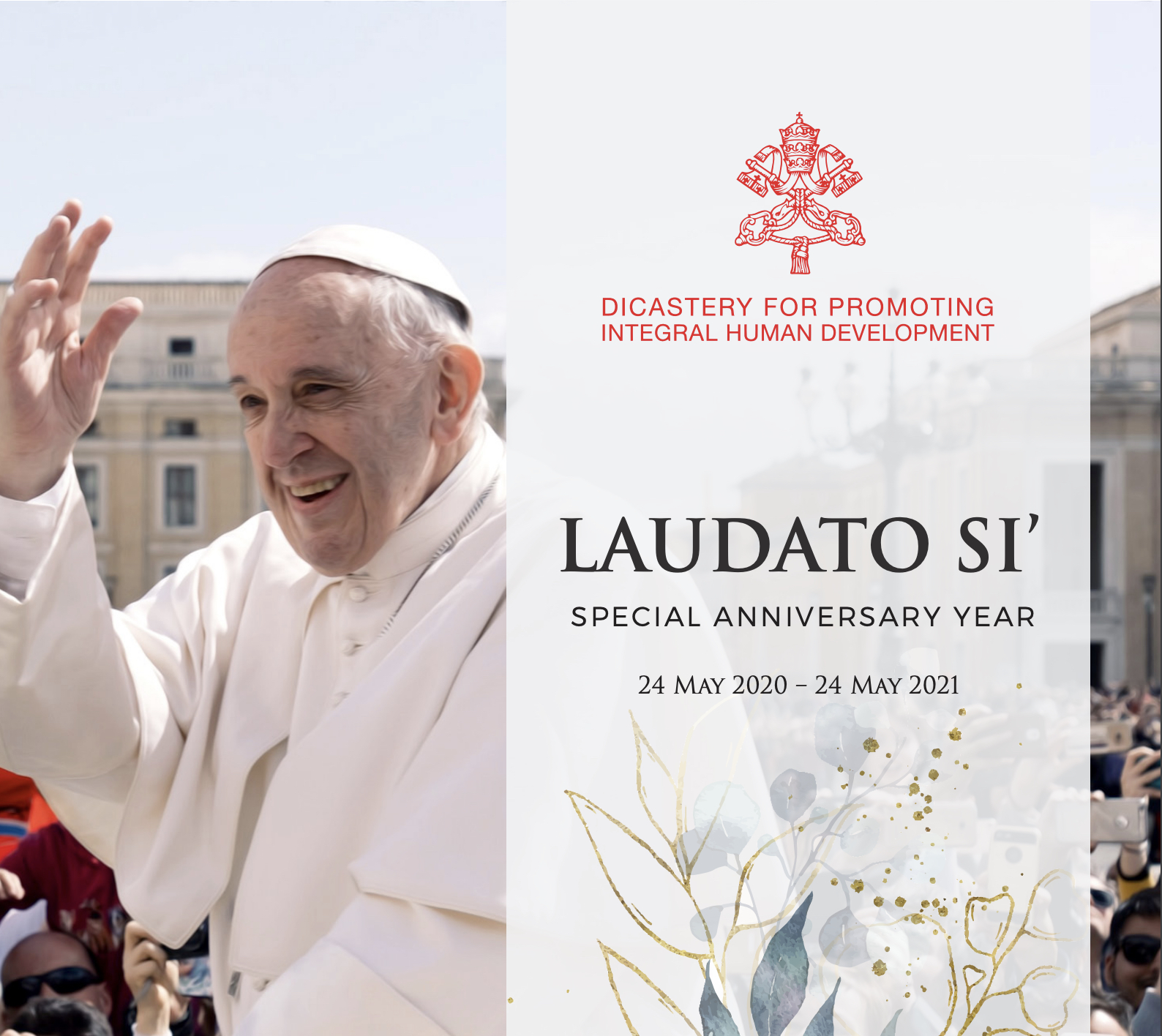 The Laudato Si' Action Platform and its related goals resemble the United Nations' own Sustainable Development Goals. The U.N. agenda lays out a blueprint for the global community by 2030 to achieve 17 goals addressing a range of issues, among them: poverty, inequality, peace, hunger, water access, gender equality, clean energy and climate action.

The seven Laudato Si' goals address a range of areas related to sustainability and ecological conversion:

For months, the dicastery has explored ways to mark the five-year anniversary of what it called the pope's "watershed" encyclical on the environment and human ecology.

In Laudato Si', Francis issued an "urgent challenge" to the entire world "to protect our common home." He encouraged cultivating a deeper relationship with God's creation, alongside actions to address the multitude of ecological crises facing the planet, including climate change, deforestation and threats to biodiversity that jeopardize the survival of upward of 1 million plant and animal species.

The release of the dicastery's plans was delayed partly by the coronavirus pandemic. The document says the five-year anniversary comes "in the midst of another watershed moment," the pandemic, adding: "The encyclical can indeed provide the moral and spiritual compass for the journey to create a more caring, fraternal, peaceful and sustainable world."

"We have, in fact, a unique opportunity to transform the present groaning and travail into the birth pangs of a new way of living together, bonded together in love, compassion and solidarity, and a more harmonious relationship with the natural world, our common home," it said.

Quoting the encyclical, the document adds: "Truly, COVID-19 has made clear how deeply we are all interconnected and interdependent. As we begin to envision a post-COVID world, we need above all an integral approach as 'everything is closely interrelated and today's problems call for a vision capable of taking into account every aspect of the global crisis.' "

The integral human development dicastery sketched out a full calendar of events for the Laudato Si' special anniversary year.

In June, the dicastery plans to release operational guidelines for other Vatican offices to implement the encyclical. On June 18, the anniversary of the release of Laudato Si', it will hold a webinar assessing the impact of the text and where it goes next.

Read this next: May or June: When's the anniversary of Pope Francis' encyclical Laudato Si'?

Other highlights include the Season of Creation (Sept. 1-Oct. 4), which will feature a series of webinars. The Economy of Francesco meeting of young economists, originally set for March, is now scheduled for November. The Vatican also expects to hold its third roundtable at the World Economic Forum, in Davos, Switzerland. It is also exploring a gathering of religious leaders in spring 2021.

The anniversary year will conclude with a conference in Rome and a public musical performance by composer Julian Revie that combines a children's chorus with excerpts from the encyclical and songbirds recorded in parts of the world experiencing environmental devastation.

The Vatican also plans to present inaugural Laudato Si' Awards that will honor individual and community leaders in living out the encyclical's message. The awards will be presented to educational institutions, parishes, dioceses, religious communities and families, as well as recognize initiatives in advocacy and action, economics, health and communication.

Additional projects in the works for the anniversary year include a Laudato Si' documentary; collaborations with the Plastic Bank; an emerging network of Laudato Si' academic institutes; the Laudato Tree Initiative, an Africa-based project to plant 1 million trees in the continent's Sahel region; and a social media contest around reading the Bible.

The dicastery describes its list of initiatives as "open-ended" and encourages communities to devise their own ideas throughout the anniversary year.

"We invite everyone to join us," the document states. "The urgency of the situation calls for immediate, holistic and unified responses at all levels — local, regional, national and international. We need, above all, 'a peoples' movement' from below, an alliance of all people of good will."

Download:
Document
LAUDATO SI' Special Anniversary Year Plans (Dicastery for Integral Human Development).pdf
This story appears in the Laudato Si' at Five feature series. View the full series.
A version of this story appeared in the May 29-June 11, 2020 print issue under the headline: Vatican office invites church on journey to 'total sustainability'.