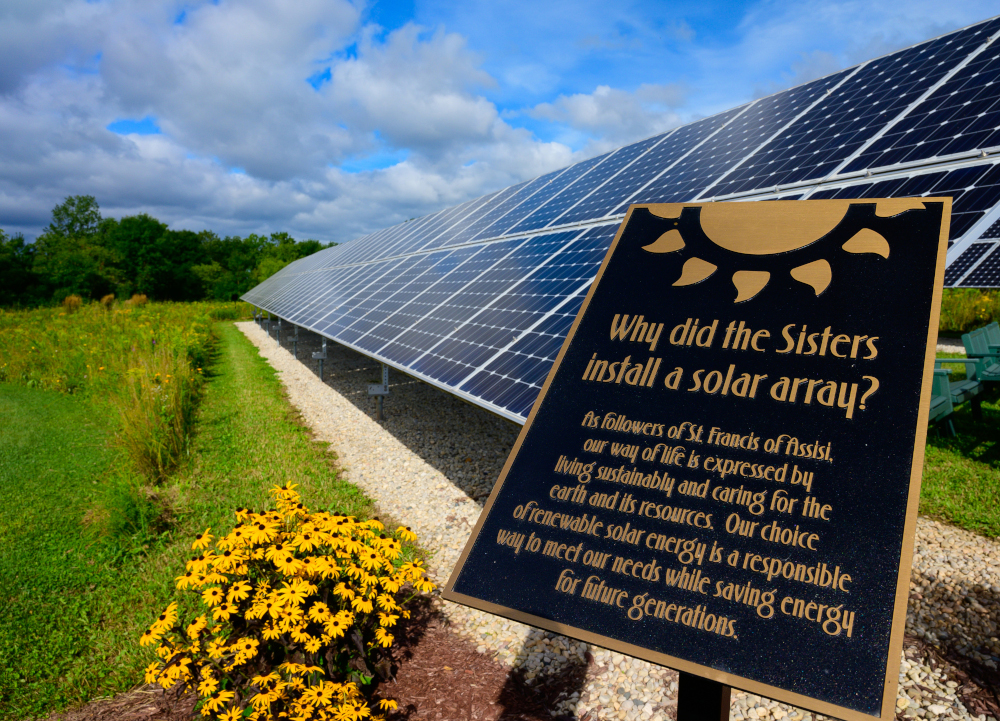 In addition to installing 280 new solar panels, the Sisters of St. Francis of the Holy Cross in Green Bay, Wis., offer an educational path with seven plaques that explain how solar energy is produced, why it was chosen and whether solar energy is a good choice in a cold climate. Photo taken Aug. 28, 2019. (CNS/TheCompass/Sam Lucero)

Winter blues got you down? Missing the sun?

Our latest Burning Question comes from Anne Searer, whose local community in Derry Township, PA, is participating in a rent-to-buy solar panels program. She's wondering how churches can also take advantage of that big ball of fire in the sky: Are there programs available for parishes or church organizations to rent solar panels?

How do I determine if solar is even right for my parish?

Let's get this out of the way at the start: Solar panels may not be a possibility for all parishes.

Roof configurations, local historic district limitations and even tree coverage can stand in the way in some places. There are other ways to go green, though, such as working with your local utility to switch to a renewable energy source for your electricity, heat and air-conditioning.

If your community is considering solar, the Washington Post has a list of questions to ask yourself. First among them, "Which way does your roof slant?" For all our sakes, I'm praying most of you have south-facing roofs, the most suitable direction for solar in the United States.

The first step in the exploration process is often an energy audit, which some utilities and organizations offer for free so be sure to check your area. Energy audits can help a parish understand how much energy they're using and what their best options are to reduce energy use.

(Tip: Try to get the whole parish community, not just the staff, thinking about their energy use and how that aligns with Christian values of being good stewards of resources.)

We've decided to go solar. What are our options?

When it comes to financing solar panels, there are three basic options.

First, your community could buy solar panels. Doing this would mean your church owns the solar panel system outright and all of the savings it generates go back directly to the church. Buying is a good option for maximizing the financial benefits of the solar panel system, however there's a pretty sizeable – and by "pretty sizeable" I mean very big – upfront cost that might be tough for a lot of parish communities (I'm talking tens of thousands of dollars).

The other two options are leasing solar panels, or agreeing to something called a Power Purchase Agreement (PPA). Both options work in a similar way and will save your parish some cash.

With a lease, you rent the solar panels and system equipment from a solar provider for a fixed monthly payment.

With a PPA, you pay a solar provider for the actual power the panels produce at a lower rate than a typical utility bill.

Still worried about the price? Good news. There are a number of rebates, tax credits and other financial incentives organizations can take advantage of to help cover the costs of installing solar. These can differ greatly from state to state, or even region by region, depending on state programs and legislation and which utility companies operate in the area. Such programs often can be the deciding factor into whether a church determines solar is a viable option for them.

But which option is best for our parish?

But I do know of some folks who might!

Here's how they put it on their website: "We deliver three key resources that most Catholic organizations lack – time, expertise, and money."

The availability of solar programs varies by city and state, so getting support like this can be super helpful in deciding the best course of action.

In Hampton, Virginia, Catholic Energies helped Immaculate Conception Catholic Church set up a PPA with Red Lion Renewables, which fully financed a $350,000 project that installed 440 solar panels on the church roof. The panels went up in July and will save Immaculate Conception 14% on its monthly electric bill.

Check out this video of Immaculate Conception's pastor, Fr. John Grace, explaining the fairly quick process of how it all came together:

You've talked a lot about money. Tell me about the environmental benefits.

Put simply, solar panels work by using light from the sun to generate energy. So, instead of relying on burning fossil fuels like coal and natural gas at a power plant that send carbon dioxide into the atmosphere (and drive climate change), with solar panels you get your energy carbon-free.

I'll give you some examples.

How do things fair for Immaculate Conception? Their panels are expected to prevent the release of 230 tons of carbon dioxide each year. 230 tons! That's equal to the carbon emissions from 25 homes' total energy use for one year.

In Wisconsin, the Sisters of St. Francis of the Holy Cross draw 50% of their convent's electrical power from the sun and have offset almost 500 tons of carbon emissions over the past 5 years. 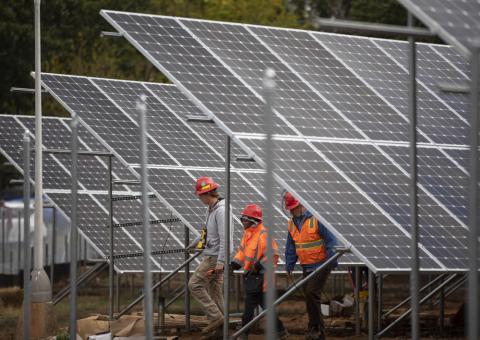 Workers in Washington are seen near solar panels Oct. 17, 2019, that are on the property of Catholic Charities of the Archdiocese of Washington. The solar panels will be leased to produce renewable energy for Washington residents. (CNS/Catholic Standard/Andrew Biraj)

Another great example of the power of solar – pun kind of intended – comes from the Archdiocese of Washington. In October, the archdiocese began installing 5,072 panels on five acres of land, making it the largest solar project in the entire city. The panels will generate 2.7 million kilowatt-hours of energy per year and will offset nearly all of the energy costs of Catholic Charities' 12 properties in Washington.

I know, I know. I'm still talking about money. But get this: the solar array is expected to save Catholic Charities in Washington $250,000 per year. That's a lot of money they can now use to enhance their services to those in need.

What else do I need to know about solar?

One thing to keep in mind is that solar isn't completely carbon-free. The manufacturing and recycling of solar systems does produce some greenhouse gas emissions. However, the panels themselves generate zero emissions.

Another thing to consider is that solar alone won't solve all our climate problems. In California, the state is now requiring most new homes be built with solar panels. Sounds great right? Not so fast. The law was actually met with a good deal of backlash from energy experts. They argue solar power plants and tougher energy efficiency standards would have been better, more affordable options for moving the state towards renewable energy.

In no way is that meant to dissuade your community from going solar. But just remember that addressing the climate crisis also calls for major transformations to the entire energy system and infrastructure.

[Jesse Remedios an NCR staff writer. You can reach him at jremedios@ncronline.org and follow him on Twitter @JCRemedios. NCR staff writer Brian Roewe contributed to this report.]