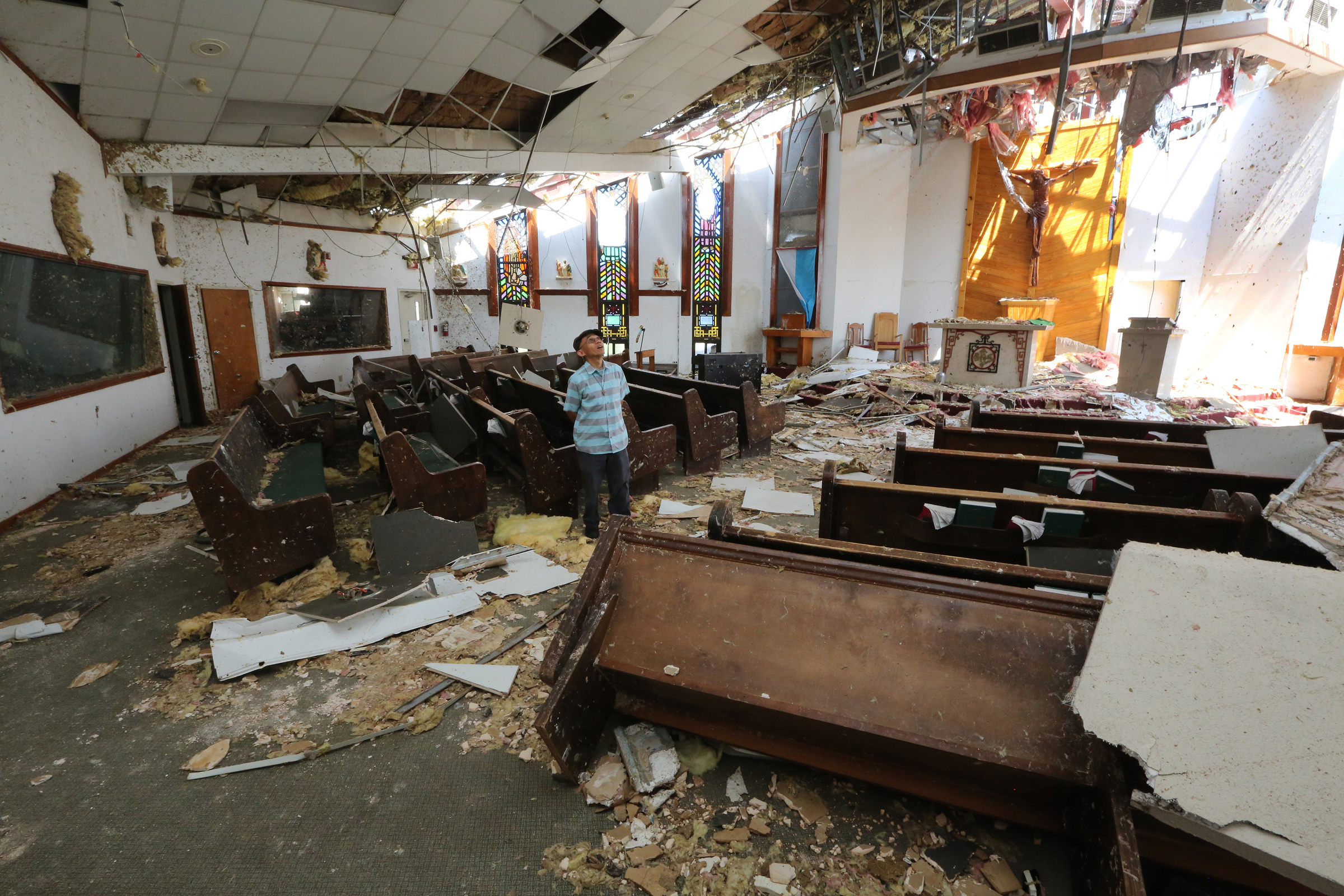 Franciscan Father John Tran Nguyen, pastor of St. Peter Church in Rockport, Texas, stands inside his destroyed church Sept. 8 in the aftermath of Hurricane Harvey. The Knights of Columbus have committed $1.4 million in aid to churches badly damaged in hurricanes in 2017. (CNS/Bob Roller)

The Knights of Columbus, based in New Haven, announced it is committing $1.4 million to repair or help rebuild churches destroyed or badly damaged by the hurricanes that hit Texas, Florida and the U.S. Virgin Islands.

The Knights of Columbus also has earmarked a significant amount of money for upcoming church repair efforts in Puerto Rico. The Knights earlier donated $100,000 to the Archdiocese of San Juan and provided generators, food, water and other necessities to aid relief efforts.

"Getting parish facilities up and running again does not just meet a practical need," Carl Anderson, CEO of the Knights, said in a Dec. 14 statement. "The people in the affected areas see the revival of their churches as a spiritual joy and as an important signal of recovery for the larger communities that surround these churches."

Some days before the Knights' announcement three churches in Texas and two synagogues in Florida sued the Federal Emergency Management Agency over being denied disaster-relief funds because current federal law prohibits houses of worship from receiving disaster relief for reconstruction from FEMA.

The Houston Chronicle reported Dec. 7 that a U.S. District Court judge denied a request from the three Texas churches that they be allowed to apply for emergency FEMA grants while their lawsuit moves forward.

The Florida synagogues filed suit in U.S. District Court Dec. 4. They argued that by denying FEMA funds to houses of worship, the federal government is violating the First Amendment's guarantee of freedom of religion and the Religious Freedom Restoration Act, a 1993 federal law which "ensures that interests in religious freedom are protected."

In Texas, the Knights of Columbus aid to Catholic churches ranges from $60,000 for St. James Church in Refugio to $150,000 for Our Lady of Victory Cathedral in Victoria.

Among the Catholic churches in Florida and the Virgin Islands being assisted by the fraternal organization are St. Peter Church in Big Pine Key, Florida, which will receive $360,000, and Missionary Sisters of the Immaculate Heart of Mary in Frederiksted, Virginia Islands, who will receive $100,000.

Said Anderson: "The Knights of Columbus is committed to building up Catholic families and strengthening parish life. The effort to restore these much-needed houses of worship is appropriate for the Knights, who are most effective within the local parish structure of prayer and service to others."

Knights of Columbus Charities raised $3.8 million for disaster relief in the months following the disasters. More than $720,000 was used to pay for food, water and other critical supplies in the immediate aftermath. On a local level, many Knights helped rescue those stranded by rising waters and reached out to their neighbors in a variety of ways.

In 2005, after Hurricane Katrina devastated New Orleans and the southern Louisiana region, the Knights of Columbus contributed $6.7 million to various dioceses to help rebuild the Catholic infrastructure in the area, aiding in the repair of schools, churches and other buildings.

In Washington, efforts were underway in the House of Representatives to allow houses of worship to receive federal disaster assistance as part of the Disaster Recovery Reform Act, H.R. 4460, which was approved by the House Committee on Transportation and Infrastructure Nov. 30.

No vote in the full House has been scheduled. The overall aim of the measure is "to improve the provision of disaster and mitigation assistance to eligible individuals and households and to eligible state, local, Tribal, and territorial governments and certain private nonprofit organizations."

At the time, the two sponsors said the bill calls for houses of worship to receive the same consideration as other nonprofit entities in getting aid.

"They have been centers of service for communities devastated by natural disasters, like after Superstorm Sandy in 2012 or Hurricane Harvey just this year, providing food, supplies, counseling and other aid despite often suffering damage to their own facilities. They should not be shut out of needed relief and should be treated like other nongovernmental organizations," Smith said.

The chairmen of the U.S. bishops' Committee for Religious Liberty and Committee on Ecumenical and Interreligious Affairs supported the measure in a letter to Congress in September.

A similar bill remained in the Senate Committee on Homeland Security and Governmental Affairs.

Legislation authorizing disaster relief for houses of worship such aid was first introduced in 2013, months after Superstorm Sandy devastated New Jersey and parts of New York state and other areas of the Northeast region. The House passed the bill, but it was never taken up in the Senate.