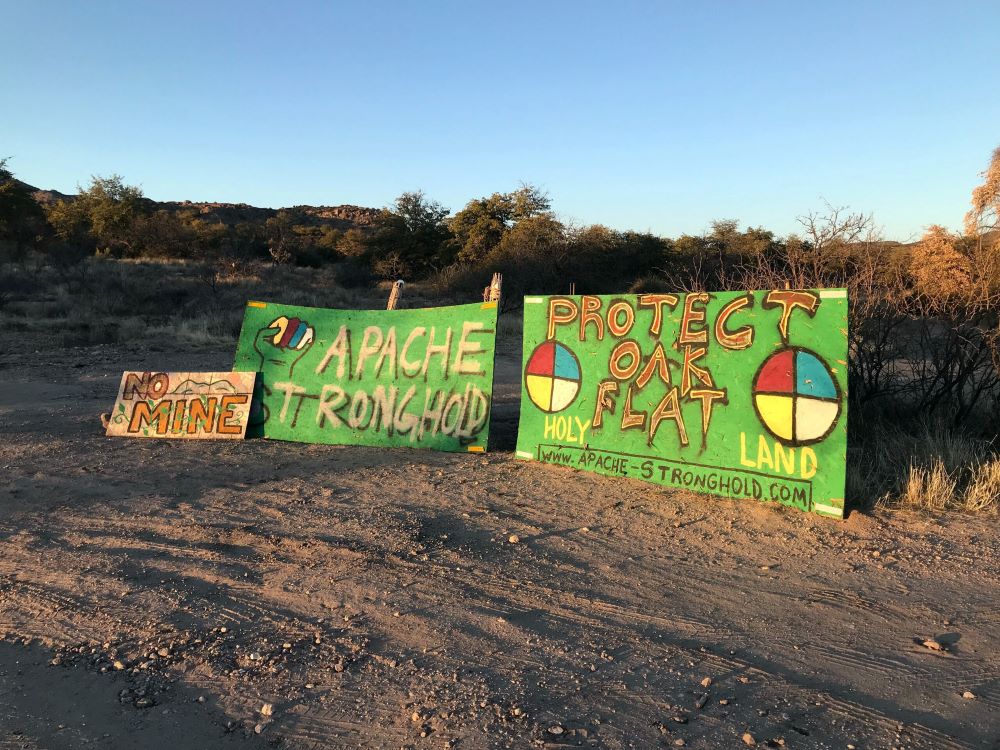 Signs are seen protesting a copper mine at Oak Flat, a site in Arizona considered sacred by the Western Apache and other Native tribes, and advocating to protect the land. A federal lawsuit argues that destruction of Oak Flat would violate the Religious Freedom Restoration Act. (RNS)

Members of Apache Stronghold, a nonprofit working to protect the Apache sacred site in Arizona known as Oak Flat, are requesting a rehearing in their case against the United States as they seek to stop a private venture from turning the land into an underground copper mine.

They’re doing so after a judge of the 9th U.S. Circuit Court of Appeals, in August, called for a vote — which is expected to take place by early October — on whether to rehear the case in front of a full 11-judge court instead of the original three-judge panel.

Earlier this summer, the divided federal appeals court, in a 2-1 ruling, held that the government could proceed with the transfer of Oak Flat to Resolution Copper, a company owned by the British-Australian mining giant Rio Tinto.

It ruled that Apache Stronghold failed to show a substantial burden on its religious exercise.

Apache Stronghold embarked on a spiritual convoy that began in Arizona on Sept. 1 and arrived Sept. 6 at the San Francisco Civic Center for a day of prayer as members urged the court to rehear their case. They filed their request for a rehearing later that day. Apache Stronghold has vowed to appeal to the U.S. Supreme Court if judges decide against rehearing the case.

To Apache Stronghold founder Wendsler Nosie Sr., the possibility of having the case reheard signals the significance of this issue. Resolution Copper's mine, Apache Stronghold said, will swallow the site in a massive crater and render "longstanding religious practices impossible." The mine could also consume and contaminate 250 billion gallons of Arizona’s limited water sources, they said.

Nosie has likened Oak Flat to Mount Sinai — "our most sacred site, where we connect with our Creator, our faith, our families and our land" — and has underscored how an attack on Indigenous religion — the oldest religion of this part of the world — is a threat to all religions.

“It affects Indian country as well as all religious organizations,” Nosie told Religion News Service on Tuesday. "When you have corporations and congressional leaders that can supersede a religion ... and we're the oldest, what does it mean for all of the rest of them?"

Jim Lichti, with First Mennonite Church of San Francisco, attended the prayer gathering in support for the preservation of Oak Flat.

Oak Flat, known in Apache as Chi’chil Biłdagoteel, is a 6.7-square-mile stretch of land east of Phoenix that falls within Tonto National Forest.

The Apache people hold a number of important ceremonies at Oak Flat that, according to their court filings, can take place only on the site, which would be destroyed by mining. The Apache believe Oak Flat is a “blessed place” where Ga’an — guardians or messengers between the people and Usen, the creator — dwell.