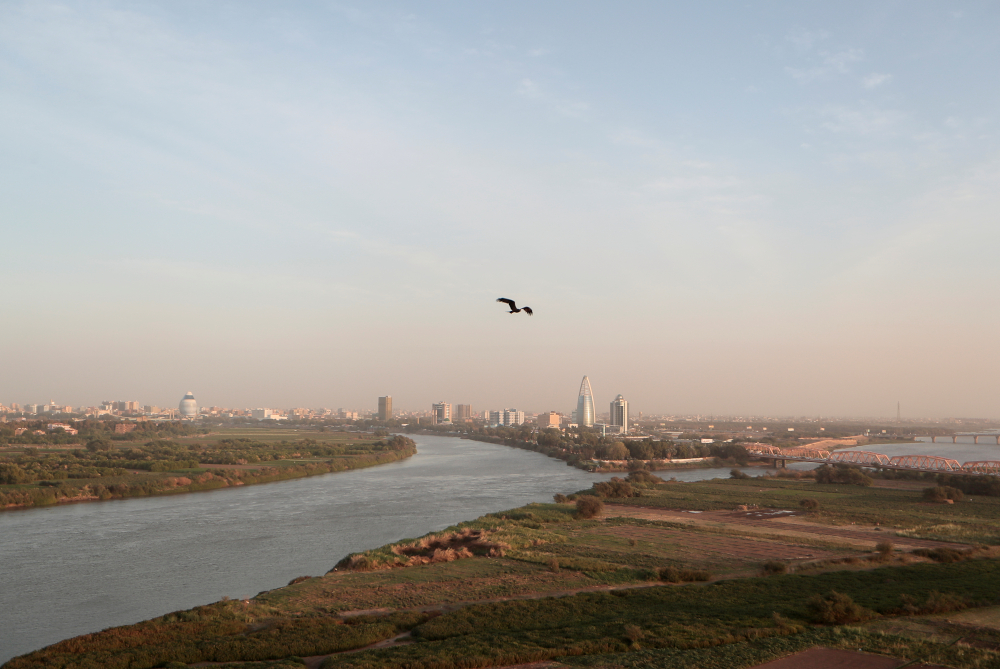 A bird flies over the convergence between the White Nile River and Blue Nile River in Khartoum, Sudan, Feb. 17, 2020. Catholic leaders in Africa are calling for dialogue among Ethiopia, Egypt and Sudan over use of the waters of the Nile River.

As Ethiopia prepares to open the continent's largest hydroelectric dam, East African Catholic leaders emphasize water is a resource that must be shared equitably.

The Nile River passes through 11 countries, but the conflict over the dam pits Ethiopia against Egypt and Sudan.

Ethiopia constructed the Grand Ethiopian Renaissance Dam on the Blue Nile, one of the major Nile River tributaries. Ethiopia sees the dam as key to ending poverty for its more than 110 million people.

"All must stand for the truth on equitable and just use of the Nile water as a God-given resource. Water is not only life, but life for all," Souraphiel told Catholic News Service in a telephone interview July 20 from Addis Ababa, Ethiopia.

In mid-July, the conflict escalated further after Ethiopia allegedly started filling a reservoir of the dam against the wish of Egypt and Sudan. Earlier, talks over the dam had ended without an agreement.

Ethiopia broke ground on the dam in 2011, but since then it has been a source of tensions in the Nile Basin region. Egypt and Sudan, which are downstream countries, feared the dam would regulate the flow of the Nile and limit water access for millions of their people.

Fr. Innocent Maganya, director of the Institute for Interreligious Dialogue and Islamic Studies at Catholic-run Tangaza University College in Nairobi, also emphasized the need for equitable sharing of the water resource, warning that if the conflict escalated, none of the states would benefit.

"It is a God-given natural resource that they need to share peacefully," said Maganya. "Religious leaders need to add their voice to the conflict. They need to join the discussions to speak the 'truth to power.'"

Souraphiel said there was optimism, since had held talks. Talks have been mediated by the United States and the African Union, and the cardinal emphasized the discussions should be held in Africa as a way of finding "African solutions to African problems."

"As long as there are discussions and talking, it is our hope there will be a positive outcome," said Souraphiel.

Ethiopia bases its claim to the Nile because the source of the Blue Nile—described by the color of the water—is the Gish Abay Springs in Ethiopia. The White Nile originates from an outlet of Lake Victoria on Uganda's side. Both tributaries meet in Khartoum, the Sudanese capital, and flow 4,100 miles northward as the Nile, before draining into the Mediterranean Sea.

For thousands of years, the Nile River has been the lifeline of Egypt, with the Bible giving accounts of farming canals, ponds and water pools. At the moment, the North African country relies on the Nile for more than 90% of its water needs for its 102 million people.

In talks, Egypt and Sudan have sought an agreement binding the three countries on how the dam will be operated.

But Souraphiel note the Ethiopian government raised the money for the dam "to generate electricity, which millions of Ethiopians need to light their homes. Ethiopia needs electricity, but also needs to help its neighbors with it."

The Association of Member Episcopal Conferences in Eastern Africa has been monitoring the conflict.

Fr. Paul Igweta, AMECEA's coordinator for the Department of Promoting Integral Human Development, said the states involved were already interested parties and on their own might not reach an amicable solution.

"The best approach would be an independent body to be involved ... in mediating through the process. The conflicts could escalate to a higher magnitude ... if not handled carefully," warned Igweta.