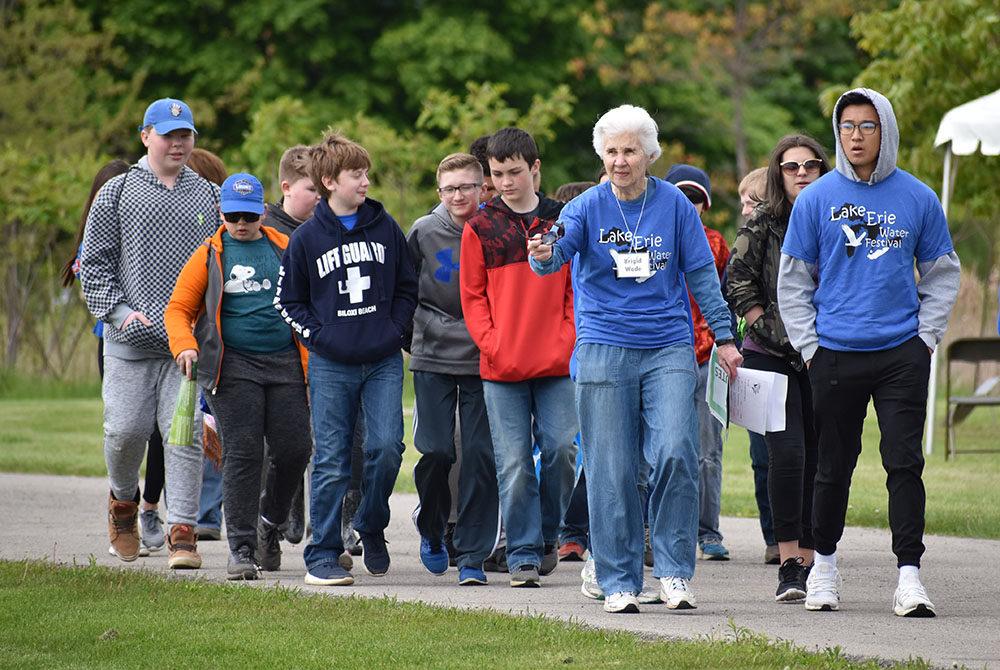 Sr. Brigid Wade of the Sisters, Servants of the Immaculate Heart of Mary of Monroe, Michigan, leads Monroe County sixth graders during the 2019 Lake Erie Water Festival, held on the grounds of the IHM Motherhouse in Monroe. (Provided photo)

Michigan's oldest established congregation of Catholic sisters made their mark as pioneering educators, opening a school in 1845 some 40 miles south of Detroit. Now these Sisters, Servants of the Immaculate Heart of Mary (IHM) of Monroe, Michigan, are breaking ground on a new front: teaching us how to live green.

Through 2019, Some 15,295 people – ranging from architects to university environmental science majors to garden clubs – have toured the massive IHM Motherhouse since 2004. They come to learn how the 376,000-square-foot facility is warmed and cooled by a geothermal heating system, and how water used for dishwashing and laundry is recycled to refill toilets, among other Earth-friendly initiatives. The sisters have become eco-justice innovators.

The Monroe IHMs embraced tackling the challenges of climate change decades before the term became part of everyday conversation and debate. The IHMs celebrate their 175th anniversary in Michigan this year as leaders among women religious in their commitment to environmental causes and eco-justice. In 2000, they committed to "developing and acting out of an ecological consciousness."

There are far fewer IHMs in classrooms today than there were in the 1950s and 1960s, when they were the predominant teaching congregation in metropolitan Detroit. The order's membership peaked at about 1,600 in 1960, and stands at about 260 today. But they're still teaching.

"We've decided that our work in education was going to continue, but now it was going to be in the field of sustainability," said IHM Sr. Joyce Durosko, who just ended a nine-year stint as chair of the IHMs' River Raisin Institute, which promotes programming and outreach on the topic. "Everything is holy out there. This is God's work we're doing."

Sr. Suzanne Sattler is often the motherhouse guide for what the IHMs, who once wore royal blue habits, call the "IHM Blue Nuns Go Green Tour."

"I can't believe nuns are doing this,'' is what Sattler says she hears all the time from visitors. "They tell me you are helping us in ways that we never thought nuns would be connected to."

The $56 million renovation of their massive motherhouse and 280-acre campus occurred from 2001 to 2003. It was redesigned to take better care of aging sisters, once assigned to dorm-style rooms with communal bathrooms. It cost about $150 per square foot for the modernization, double the first estimate. 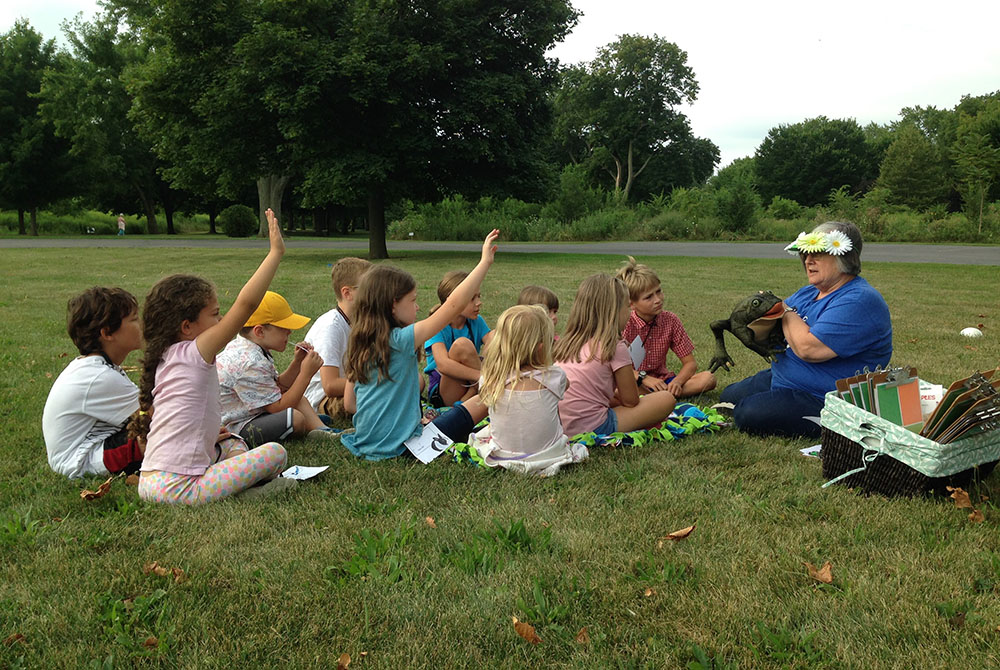 How to pay for it? When IHMs gathered to brainstorm, they broke into 15-member groups. When one group just emptied their pockets with cash on hand, they collected $150. "Here's the first square foot," Sr. Marie Gabriel Hungerman said to cheers. That prompted alumnae and donors to make $150 donations, also.

"Visitors can't believe that a group of women religious accomplished a project of this kind of scope," reiterates Sharon Venier, who helps coordinate the IHM tours. "The sisters had to educate themselves about what they needed, about what they wanted, about what was available. In 2002, they figured out what they would need in 2020 and then 2040. The scope of their decision and their legacy is amazing."

Sattler said the contractors and architects (Crissman Construction and Susan Maxman & Partners, now SMP Architects) collaborated extensively with the IHMs. The meetings always started with a prayer led by an IHM. But Sattler remembers the one day when a contractor asked to say the prayer.

"We always emphasized that this wasn't just renovating a building, but it was bringing natural life to campus," said Sattler. The contractor who offered a prayer "was feeling together with us."

"It started and continues with our own personal transformation," said Sattler.

The IHM's geothermal system was one of the largest in the country when it was built, and its capabilities surprise visitors the most, said Sattler. "It doesn't smell. It doesn't make noise. It doesn't have visible pollution." In designing the renovation, the IHMs calculated life cycle costs — what does it cost to buy the item, and what does it cost to maintain it, and how long will it last?

The renovation, which earned LEED-NC certification and two awards from the Environmental Protection Agency, became a national model for green building projects.

After the renovation, the IHMs created the River Raisin Institute, named after the waterway a few hundred yards from the motherhouse front door and which leads into nearby Lake Erie. Its goal is "to respect, nurture and promote the well-being of all creation," according to its website. 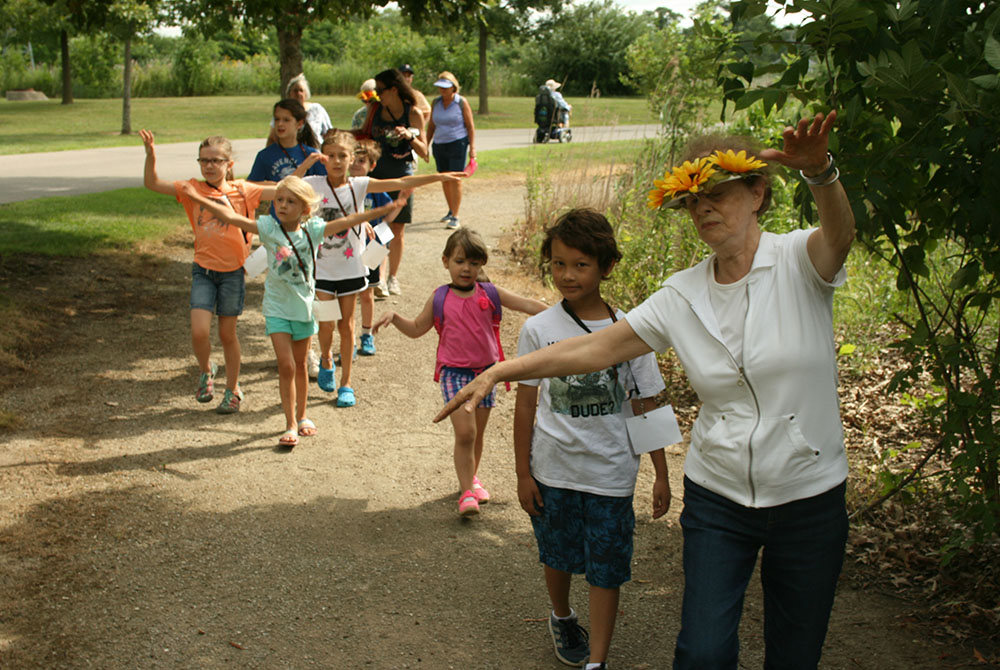 The River Raisin Institute's Climate Literacy program provides curricula and resources to teachers about climate change's effects on farming. The institute's "Back to the Farm" program teaches schoolkids about sustainable farming practices, showcased in the organic gardens in the back of the motherhouse. The IHMs give a worm vermi-composting bin, made from recycled plastic buckets, to participating schools.

Until 1976, the IHMs operated St. Mary Farm for 56 years. The farm spanned 1,100 acres over several parcels in Monroe. Summer breaks often found IHM Sisters in full habits tending to the sheep, poultry, dairy and beef cattle on the farm, as well as toiling in the vegetable fields and fruit orchards. The harvest fed the Motherhouse sisters, and truck drivers delivered fruits of the harvest to convents across Michigan, Ohio and Illinois.

In 2013, the IHMs leased several acres of their Motherhouse campus to DTE Energy. The utility installed a $2.6 million solar energy panel system, capable of generating power for 70 homes.

At the upcoming Lake Erie Water Festival on May 19, sixth graders will rotate through 20-minute workshops on a variety of topics, from soil erosion to beekeeping, where kids can try on beekeeping gear and hear from the honey beekeeper.

"I'm so inspired by what they are doing with the schools. To me, it's a religious experience," says Sr. Anne Wisda, 85, a River Raisin Institute board member who grows non-GMO heirloom zinnias and heirloom tomatoes in the IHM organic garden.

"For myself, it helps me to grow and deepen in my own spirituality and to bring healing to our beautiful earth and our common home," said Wisda. "It's really a wonderful gift of God in my elder years to be involved with the River Raisin Institute."

Sr. Brigid Wade is a campus leader for the Lake Erie Water Festival, and also works with Little Earth Buddies.

"When you are living here, the whole thing is to recycle. When I have a piece of paper, I can't crumble it. I rip it in half to reuse if I can. Every floor has a recycling bin. When I make coffee, I dump the grounds and I clean the paper and I put it in the recycling bin," said Wade. "Once you get into this, you feel terrible if you throw a piece of paper away. You try to recycle everything and save this Earth."

[Patricia Montemurri is the author of Immaculate Heart of Mary Sisters of Michigan, released March 9 to help mark national Catholic Sisters Week and to benefit the IHMs. To order, visit bit.ly/IHMbook.]