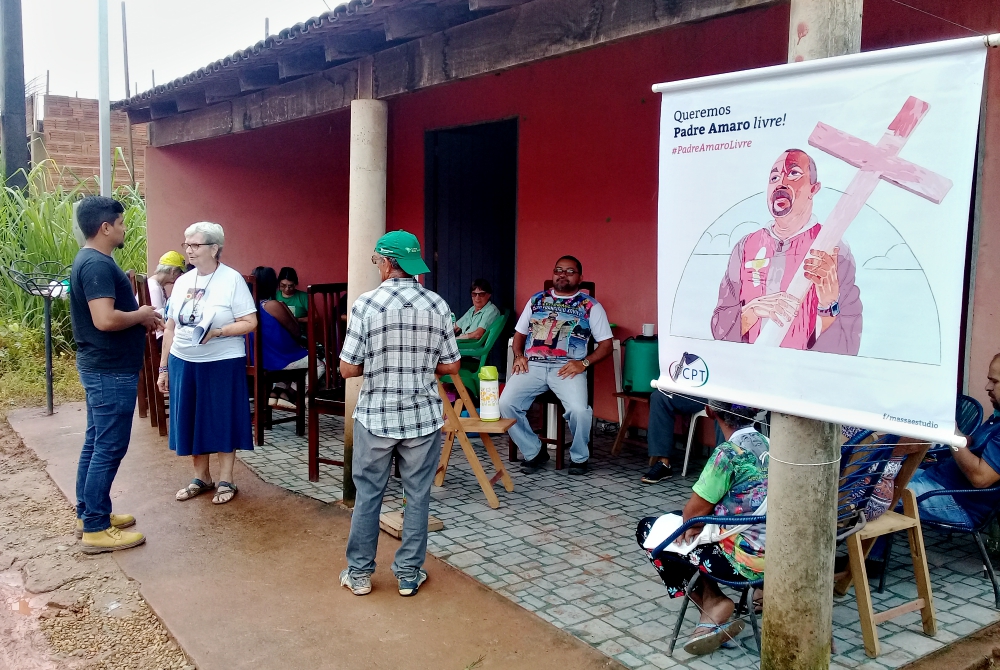 Supporters of Fr. José Amaro wait near the courthouse March 13 in Anapu in the Brazilian state of Pará for proceedings against him to finish. (Carlos Tautz)

Fr. José Amaro emerged from a hearing in a courthouse in Anapu in the Brazilian state of Pará on March 13, after defending himself against charges of eight crimes related to land occupation levied by local police, state prosecutors and large landowners two years ago when his legal nightmare began.

Amaro has denied any illegal activities in his efforts to help landless people in the Amazon region, a ministry he continued after the 2005 assassination of Notre Dame de Namur Sr. Dorothy Stang, with whom he had worked.

"While presenting my defense, I knew you all were here waiting for me and this gave me extra strength," Amaro said to the 50 rural workers and religious who stood outside the courthouse for almost four hours.

Restrictions on Amaro's freedom will continue until the final sentence, which should be issued between the second half of 2019 and the first half of 2020. He faces eight charges, including extortion, money laundering, criminal association and trespassing, brought by Silvério Albano Fernandes, then-president of the Union of Rural Producers.

Amaro's supporters say the charges are politically motivated, a fabrication by wealthy landowners meant to discredit him and cripple his efforts to help landless farmers exercise their rights.

Amaro was charged in March 2017, then arrested by the chief of police in March 2018. He was detained for 92 days in prison, a measure usually applied only to dangerous defendants or those who may flee the country, which didn't apply in Amaro's case.

He was released after efforts by his lawyers, until Amaro and his defense witnesses could be heard in court proceedings. In the arrest proceedings, the chief of police also requested the immediate removal of Amaro from Santa Luzia Church in Anapu, where he was pastor, and from the local branch of the Pastoral Land Commission, established by Brazilian bishops to assist rural workers seeking land reform.

While the police chief could not actually remove Amaro from those positions, the local court, in accepting the chief's demands by ordering Amaro's arrest and imposing restrictions upon his release, effectively accomplished that aim.

According to Amaro's lawyers, Wednesday's hearing left Amaro in much better legal situation. Amaro gave the local judge a clear and firm version of the charges he faces. "I simply explained to the judge how these were my daily duties and how it was distorted to charge me," he told the group of people who waited for him.

This hearing was the third — the other two took place in September and November 2018 — where witnesses for defense and prosecution have been heard. Three defense witnesses, who live in other cities of Pará and in the distant state of Mato Grosso, will be heard by the local court between June and August.

Until the final decision, Amaro, who moved from Anapu and now lives in the Xingu Prelature, in the nearby city of Altamira, is forced to live a life of limitations. Under the court restrictions:

The restrictions cut into the heart of Amaro's ability to do priestly work, especially for someone who had made the decisive choice of working jointly with the poor, supporters said.

"In practice, the great landowners accusing Amaro, who failed to physically assassinate him as they did with Sister Dorothy because a new crime could have an even greater political cost than the previous one, have already achieved what they wanted," said José Batista Gonçalves Afonso, a lawyer with the Pastoral Land Commission in Pará and one of Amaro's defense attorneys. 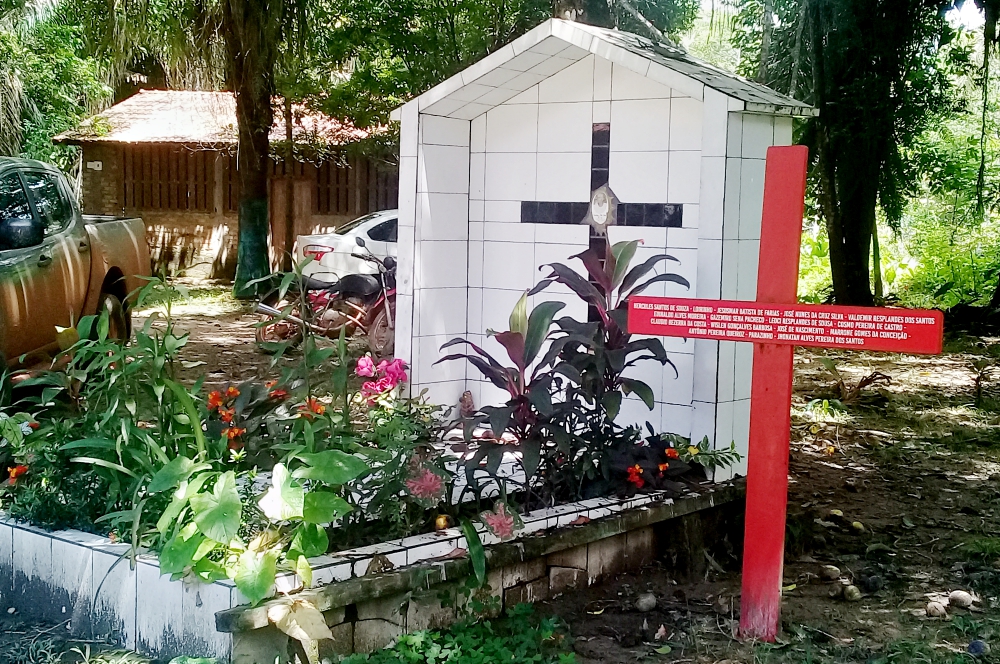 A cross at the grave of Notre Dame de Namur Sr. Dorothy Stang in Anapu, Brazil, bears the names of rural workers killed or missing since 2015. (Carlos Tautz)

The commission believes that the investigation is a farce. "We cannot and should not forget that Sister Dorothy, before being assassinated, was victim of a similar process, sponsored by the same actors of now: farmers and public security organs of Pará," said a 2017 commission report.

"This is not a simple process," summarized Batista. "What is at stake here is the class struggle and the agrarian reform in Anapu, in Para and in Brazil."

Fernandes' name is currently being discussed to assume management of the Anapu office of INCRA, the official agency of the Brazilian government responsible for the process of legalization and distribution of public lands.

Batista explained that after Stang's murder, the region's farmers decided to adopt other tactics to prevent the distribution of land to the peasants.

"It's another way of thinking about violence," he said. "They realized that the political and economic cost of murdering a missionary sister was very high. Two members of the Union of Rural Producers, where the big landowners organized themselves, were arrested. A large portion of their land was taken over by INCRA and distributed to landless workers in new agrarian reform settlements. The popular struggle has not diminished — it's even increased. The great landowners made a conjuncture analysis and decided to change the way of fighting the people's struggle."

Batista continued, "Today, these farmers join forces with the civil and military police in each locality where they operate. Many rural workers are no longer murdered in the countryside because that would shift the crime investigation to the agrarian crime police station, which is farther away from the pressure farmers make. So these people were murdered in the city so that their deaths were attributed to common crimes."

According to the Pastoral Land Commission report, about 16 or 17 landless rural workers have been murdered in the city of Anapu since 2015. While the report noted that police attributed some of these murders to cases of personal strife, such crimes raise suspicions of links to land disputes. Anapu is considered by the commission's evaluation as one of the most violent regions of the state of Pará and in the country.

"In the case of Father Amaro, they tried to kill him morally, so that he could no longer work and live in Anapu and, in that sense, they did achieve a victory," Batista said. "But the struggle for agrarian reform is permanent and can change at any time."

In the hearing, Amaro testified for almost four hours and denied having headed a criminal organization that would plan to occupy a farm called Santa Maria that belongs to rancher Fernandes.

After leaving the proceeding, Amaro saw several people he had spent more than 30 years working with in Anapu waiting for him outside the courthouse. "What comforts me is the fact that all the people of Anapu stay together and support me. This is important," he said in an interview. Among them were a number of poor people who have traveled tens of kilometers in forest regions where there is no public transport and families rely on their own cars and motorcycles. 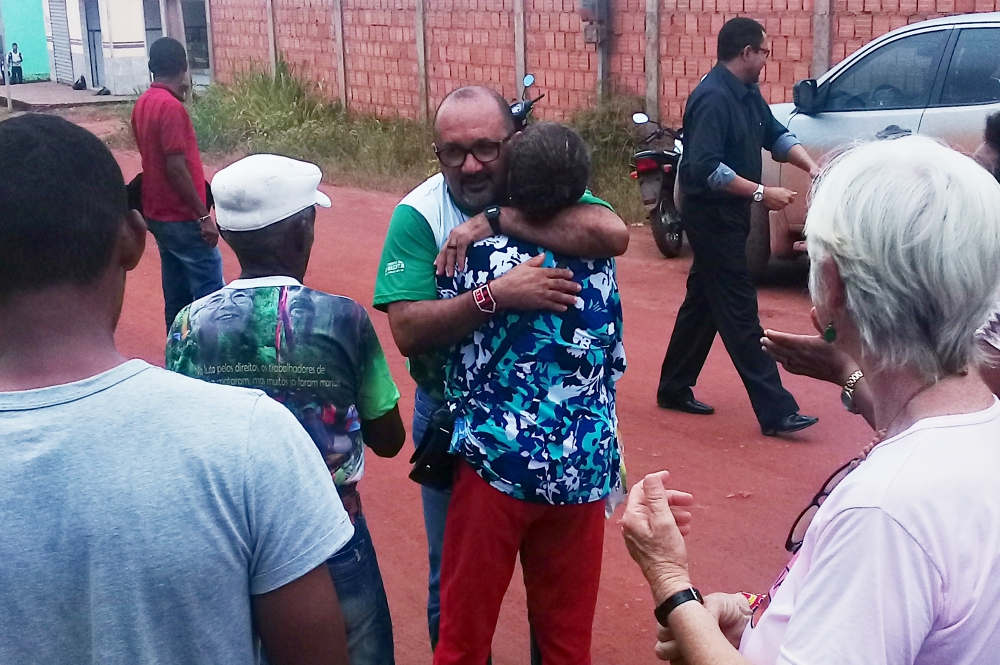 Fr. José Amaro hugs a supporter who was waiting in a nearby house with about 50 others after he finished testifying in court for four hours. Supporters, including the church's Pastoral Land Commission, contend the charges against him are politically motivated by wealthy ranchers and farmers. (Carlos Tautz)

On the same unpaved, mud-filled street as the Anapu court, in a modest few-room house, 50 or so people waited for Amaro throughout the morning. They were rural and religious workers, all from the city of Anapu, where he had been their parish priest until his pretrial detention ordered by the Brazilian justice system.

"I have known Fr. Amaro since he arrived in Anapu and I do not believe anything that the ranchers say," said Francisco Pereira de Melo, a professor at a community school in Anapu settlements, one of the people who waited during the testimony.

"I also met and worked with Sister Dorothy in rural Anapu," added Melo. He arrived in the Amazon rainforest in 1972 with his family and participated in the settlements of local workers, after government promises to give ownership to small farmers aiming to establish in the Amazon region and start cultivating the land. When she arrived in the region in 1982, Stang started to help landless people to organize, not only demanding lands but also education and health services.

Melo is one of the hundreds of people who meet monthly in the Defense Committee of Anapu, founded after Stang's death to continue the struggles in which she was involved, whether for agrarian reform or improving the quality of life of people living in the urban area of Anapu. "We've never stopped making a meeting since Dorothy died," said Melo.

Amaro took part in most of the meetings and remembers that time spent with the people involved with committee fondly. Even following the legal restrictions, he makes plans to assume other tasks in the church as soon as the court makes a final decision: "Being in touch in daily work with people such as Melo and the others. This is what I was made for."

[Carlos Tautz is a journalist based in Rio de Janeiro. He mostly writes about human rights, international issues and economy.]