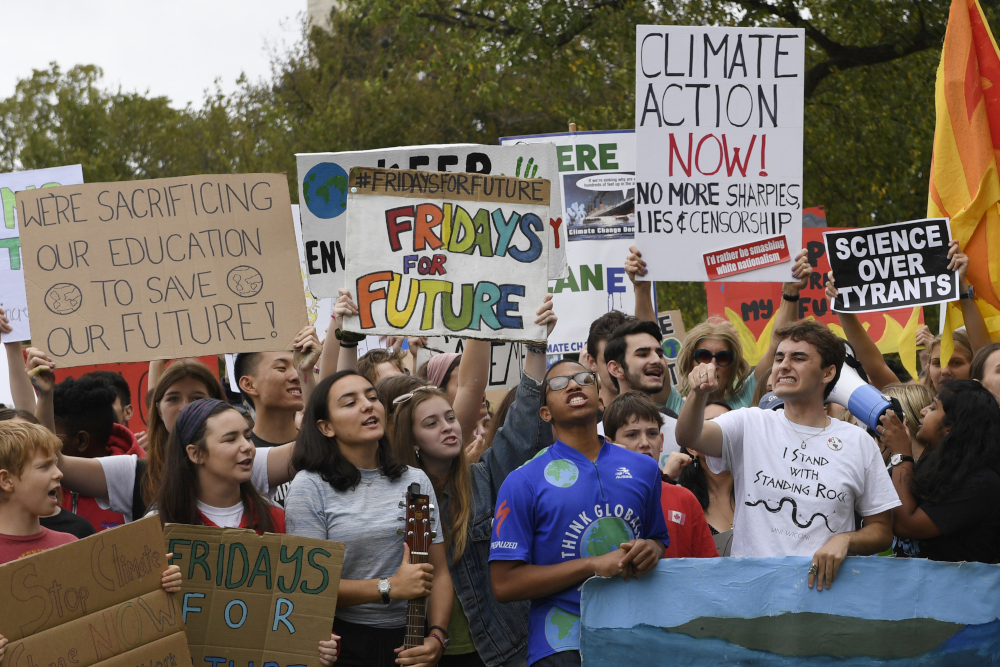 Young climate activists march during a rally outside the White House in Washington on Sept. 13, 2019. (AP/Susan Walsh)

As the world approaches a tipping point in the climate change crisis, many people finally appear to be waking up to the need for radical change, although the Trump administration is still pushing in the opposite direction.

Antonio Guterres, the secretary-general of the United Nations, urged world leaders to come to New York with action plans, not fancy speeches, to deal with climate change. Prior to the U.N. Climate Action Summit, which began on Sept. 23, students around the world went on strike and scientists gathered to warn that climate change is hitting harder and sooner than they had originally predicted.

Dealing with climate change will require an ethical vision, solid science and good economic policies. The absence of any of these three could consign our response to failure.

The ethical vision is needed because any adequate response will require sacrifice, and people do not make sacrifices without motivation. Too many people alive today do not see the need for sacrificing their comfort to reduce climate change. Most will be dead before the worst happens. In addition, the worst impact will be on the poor, not the wealthy, whose money can mitigate the consequences of global warming.

Responding to climate change requires a moral vision that puts the poor and future generations on an equal footing with ourselves. A libertarian vision where each person seeks his own advantage will not work. Common effort and common sacrifice for the common good are what is required. 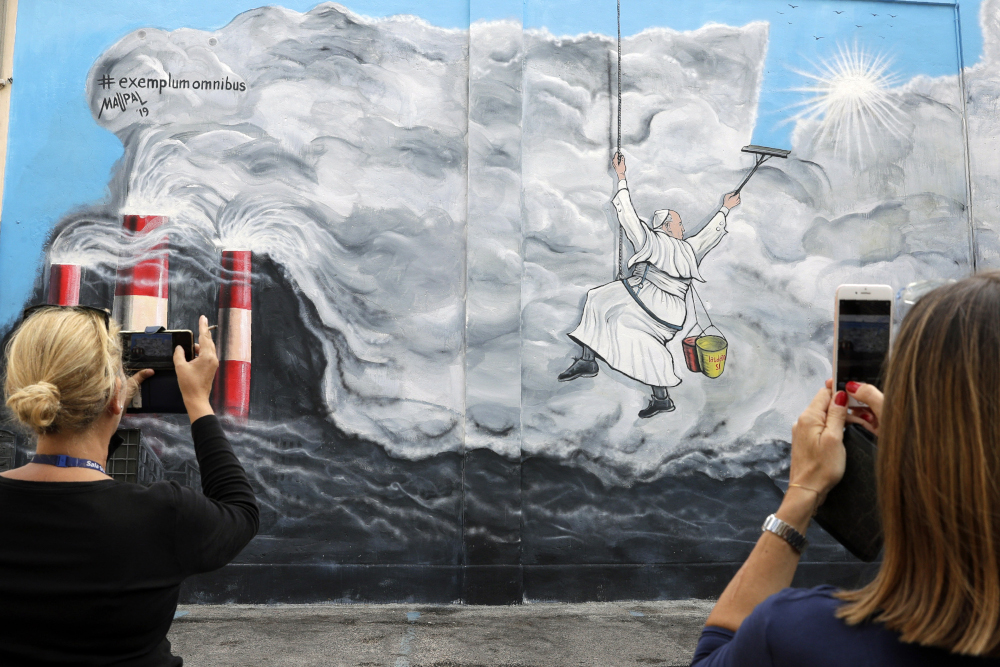 People photograph a mural depicting Pope Francis cleaning pollution from the sky, painted on a wall of Albano, near Rome, on Sept. 21, 2019. The mural, by artist Maupal, or Mauro Pallotta, is named "Exemplum Omnibus" (Example for All) and was inspired by the encyclical "Laudato Si'" (Praise Be), which declared an urgent need for the political and spiritual conversion of global leaders and individuals to dedicate themselves to curbing climate change and ending policies and personal habits that destroy creation. (AP/Andrew Medichini)

Pope Francis said in his video message to the climate summit, "The problem of climate change is related to issues of ethics, equity and social justice."

"With honesty, responsibility and courage we have to put our intelligence at the service of another type of progress," said the pope, "one which is healthier, more human, more social, more integral, capable of placing economy at the service of the human person, building peace and protecting the environment."

It was this moral sense that Greta Thunberg, the leader of the worldwide student strike, represented when she told the gathered leaders at the U.N., "If you really understood the situation and still kept on failing to act, then you would be evil, and that I refuse to believe."

But the climate crisis will require not only an ethical vision but a religious one. Throughout human history, religion has motivated people to do extraordinary things, sometimes bad but also good. The cathedrals of Europe were begun and mostly built by people who never saw their completion. How do you motivate someone to take the first shovel of dirt for a building that will not be completed for centuries?

Pope Francis, Ecumenical Patriarch Bartholomew of the Orthodox Christian Church, the Dalai Lama and many other religious leaders are attempting to lead their followers with a religious vision that is committed to taking on climate change. If the Earth is God’s creation, then abusing it is an offense against God.

If the Earth is an icon where we can see the face of God, then defacing it is a sacrilege. If we are all God’s children, then we must protect each other from harm. If you contribute to global warming, then you may be consigned to the fires of hell.

But an ethical and religious vision is insufficient without solid science. Science tells us what is causing global warming: CO2 and other greenhouse gases caused by human activity. Science tells us what the impact of global warming will be: melting ice caps and rising sea levels; melting glaciers and disruption of weather patterns and water supplies; disruption of agriculture; and extermination of millions of species of animals, plants and insects.

According to the latest report on climate change compiled by the U.N. World Meteorological Organization, "Widespread and long-lasting heatwaves, record-breaking fires and other devastating events such as tropical cyclones, floods and drought have had major impacts on socio-economic development and the environment."

The World Meteorological Organization report "highlights the urgency of fundamental socio-economic transformations and carbon-curbing actions in key sectors such as land use and energy to avert dangerous global temperature increase, with potentially irreversible impacts."

Science not only shows us how bad things are, it can also show us ways to reverse these trends. Changing how we travel, how we farm and what we consume can make a difference. Scientific research can also find new solutions that we have not even thought of.

But ethics and science will not be enough if the world’s economy is going in the wrong direction. We need good economic policies.

Tax and regulatory policies still subsidize the carbon-based economy. The oil, gas and coal lobbies fight to protect these subsidies that encourage the consumption of fossil fuels. Economists, on the other hand, tell us the best way to slow global warming is to put a tax on carbon. This would send a signal throughout the economy that it is in our financial interest to reduce our consumption of fossil fuels.

Gilbert Metcalf of the Brookings Institution argues that a well-designed carbon tax can actually boost jobs and gross domestic product, while reducing carbon emissions. He prefers a carbon tax to the more complicated and less effective "cap and trade" mechanisms espoused by those who are allergic to the word "tax."

An initial rate of, say, $40 a ton of carbon dioxide emissions would provide price incentives for both consumers and businesses to reduce carbon consumption and invest in energy efficiency and clean sources of energy.

GM is closing plants that produce more efficient cars because with gas prices low, consumers prefer SUVs and trucks. If these plants had stayed open it might not have been hit by strikes.

An ethical vision, solid science and good economic policies are necessary if we are to save future generations and our planet from devastation. There is no time to spare.