Families Separated at the Border 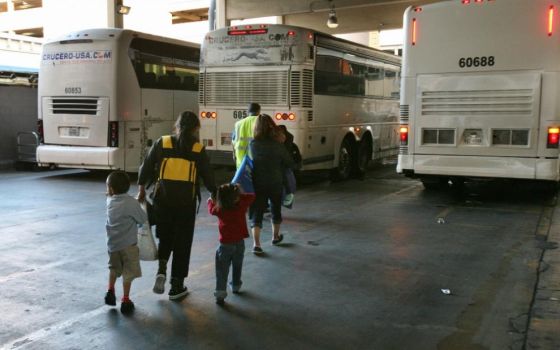 The U.S. Conference of Catholic Bishops' annual spring assembly began with a statement condemning recent immigration policies from the Trump administration that have separated immigrant families at the U.S.-Mexico border. Cardinal Daniel DiNardo wrote, "Families are the foundational element of our society and they must be able to stay together. While protecting our borders is important, we can and must do better as a government, and as a society, to find other ways to ensure that safety. Separating babies from their mothers is not the answer and is immoral."

Here, we've gathered recent news articles and columns on the topic of immigration and family separation. Watch this page for updates.

McAllen, Texas - More than 2,300 immigrant children have been separated from their parents after Attorney General Jeff Sessions announced a zero-tolerance policy for border crossers. Though family separation practices have been cancelled through executive order, suffering has not.

Causing irreparable harm. Unconscionable. Immoral policies and practices. These are some of the words sisters levied against the Trump administration in light of current policies as they called for protection of the integrity of the family structure.

The court-ordered July 26 deadline to reunite families separated at the border has passed, but more than 400 children remain thousands of miles apart from their parents.

Some of migrant children under age 5 separated from their families by the government were reunited with loved ones July 9 with help from Catholic organizations.

New York: Outside the Cayuga House for Children in East Harlem July 11, members of the press gathered hoping to hear from a Honduran father who has been separated from his wife and three children after trying to seek asylum.

A small c catholic: One of my sisters emailed her siblings as this border-crossing story grew hot in the news. "I have a story about being separated from a parent," she told us.

US bishops need to be shepherds amid deportations, demonizations