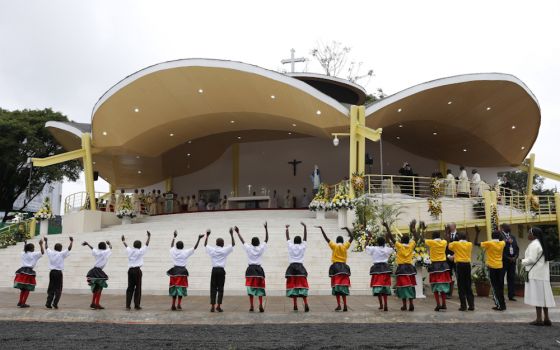 Children dance as Pope Francis celebrates Mass on the campus of the University of Nairobi in Nairobi, Kenya, Nov. 26, 2015. (CNS/Paul Haring)

Commentary: Pope Francis is changing the metaphor for community, from an encampment with rigid and guarded boundaries to a people on journey.

Pope Francis' three-country trip to Africa, which concluded Monday, presented numerous memorable moments, including in the Central African Republic, a war-torn country where he brought a message of peace in addition to opening early the Jubilee Year of Mercy.

But in the age of gifs and memes, the image is king. So it goes for Francis in Africa.

As the trip wrapped up Monday, a picture of the pope from the Agence France-Presse, taken by photographer Gianluigi Guercia, caught fire online.

Aboard the papal plane, Francis told journalists he would not "descend into reflections that are so casuistic when people are dying," when asked about specific church teachings.

Pope calls for eliminating carbon use, says failure in Paris would be 'catastrophic'

In Kenya, Francis calls for healing of divisions through tolerance, reconciliation

Francis' Africa trip a visit to those 'most suffering,' push for peace