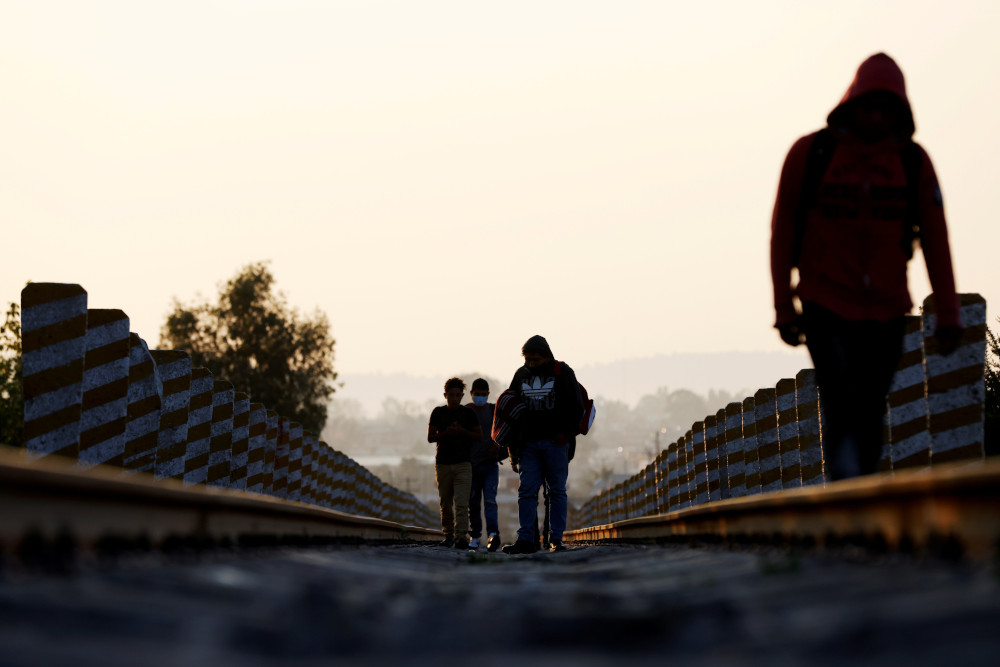 Central American migrants in Apizaco, Mexico, walk on a train track near a Catholic-run shelter April 16, 2021, as they make their journey to the United States. (CNS/Reuters/Carlos Jasso)

Pope Francis said the COVID-19 crisis has made it clear that "human beings are like dust, but valuable dust in God's eyes," and it's important to keep that in mind when dealing with those fleeing from various crises in Central America.

Previous months have laid bare the problems Central America faces, including "the deterioration of social conditions that were already precarious and complex due to an unjust economic system," the pope said in a statement in Spanish and Italian published June 10 on the Vatican's communication's page.

The statement's release was intended for the 30th anniversary of the Central American Integration System, known as SICA for its acronym in Spanish.

SICA is a regional body that promotes Central American cooperation. The Holy See has participated as an observer from outside of the region since 2012, the statement said, and this year it was participating in a "solidarity event" destined to support "improving the situation of those forcibly displaced" and the communities that have helped them in Central America and Mexico.

"Despite the innate sense of hospitality inherent in the people of Central America, sanitary restrictions have influenced the closure of many borders. Many were left halfway, unable to advance or retreat" in a journey seeking distance from the unjust economic system that forces them to flee their home countries or localities, the pope said.

"This system erodes the family, the basic cell of society," Francis continued. "And thus, people, without a home, without a family, without a community, without belonging, find themselves uprooted and orphaned, at the mercy of highly conflictive situations and not a quick solution: domestic violence, femicides, armed gangs, criminals, drug trafficking, sexual exploitation of minors and those not so minor," he said.

"These factors, mixed with the pandemic and a climate crisis characterized by an increasingly intense drought and increasingly frequent hurricanes, have given," he added, "human mobility the connotation of a forced mass phenomenon that takes on the appearance of a regional exodus."

Even as the pandemic has exposed the fragility of those who have been displaced, including internally within their countries, there isn't a system to provide them adequate protection, he said.

While the Holy See reaffirms "the exclusive right of states to manage their own borders," it also expects "a common, solid and coordinated regional commitment, destined to place the person and their dignity at the center of all political exercise," the pope said.

"Indeed, the principle of the centrality of the human person obliges us to always put personal security before national security," he explained. "The conditions of migrants, asylum-seekers and refugees require that they be guaranteed personal safety and access to basic services."

Those also fleeing the effect of the grave climate crisis must be afforded similar protections along with the adoption of regional policies calling for the protection of the "common home" to mitigate the impact of climate-related phenomena as well as environmental catastrophes caused by land-grabbing, deforestation and appropriation of water, he said.

The pope's statement also addressed human trafficking, violence against women and children, but focused on overcoming nationalism in favor of a regional effort embracing fraternity.

"This is about a joint effort that goes beyond national borders," he said, "to allow regional exchange: Cultural, economic and political integration with [neighboring countries] should be accompanied by an educational process that promotes the value of love of neighbor, the first indispensable exercise to achieve a healthy universal integration."

The world finds itself facing two paths, the pope's statement said, one that leads to strengthening multilateralism and another toward embracing attitudes of self-sufficiency, nationalism, protectionism, individualism and isolationism, leaving behind in the peripheries the poor and the most vulnerable.

The pope asked that in the light of new and profound causes of displacement, "borders don't become zones of tension but open arms of reconciliation."

"The church walks with the people of Central America, who have known how to face crises with courage and be communities that welcome others, and exhorts them to persevere in solidarity with mutual trust and bold hope," his message said.