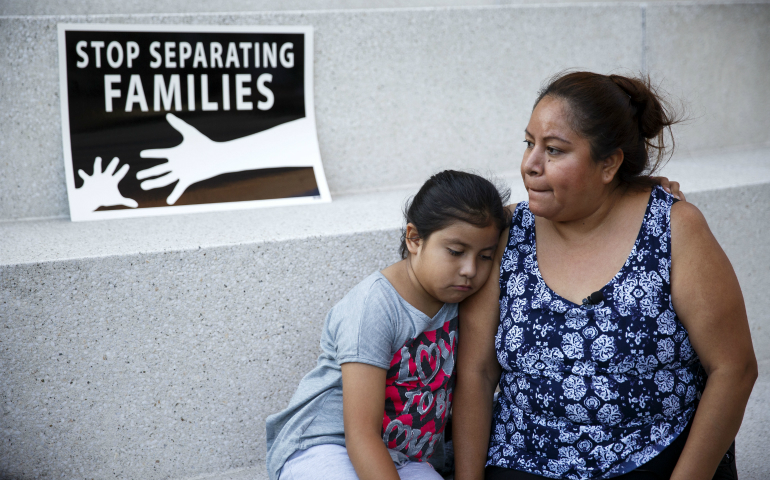 What is an immigrant to do now that Donald Trump has been elected? While well-meaning people encourage us to think positively or wait it out, many among us don't have that luxury. The new administration is poised to directly and significantly alter the lives of certain groups of people. My fellow Guatemalan parishioners are in that group, and they're deeply troubled by the promises Trump has made to deport them and to build a wall. His utter disregard for the lives of real human beings completely contradicts his supposed "pro-life" stance.

Last Sunday, after our bilingual liturgy, I invited our Latino parishioners to gather in the cafeteria for a space of solidarity in the wake of the election results. About 30 men and women took their seats in rows of metal folding chairs and scooted close to the brown cafeteria tables. The little ones zipped around, giggling as they played, but the few older children in attendance were quiet. The always-uncertain future of these families had become drastically more uncertain from one day to the next. Uneasiness hung in the air.

First we prayed together. I gave background information on what to expect from our country's political process over the next few months. Then, I asked if anyone had anything they needed or wanted to share with the group.

After several of the most outspoken men offered thoughts from their seats, Angelica stood up. Angelica is a lovely as her name suggests. She is a middle-aged Guatemalan woman of indigenous descent, and her high cheekbones sing of determined strength born of a hard life, her soft eyes reveal a gentle soul rooted deeply in faith. God is her everything. She distributes Eucharist at our weekly bilingual Mass with a reverent joy that reminds me it is indeed "el cuerpo de Cristo" that I receive. Her graceful posture always impresses me, and today was no different. She had something important to say.

"I need to tell you what happened to me," Angelica began, pausing at the end of the sentence as she often does for emphasis. "I was shopping at Kroger on Thursday, minding my own business. Someone I didn't know approached me. They said to me, 'Haha! Trump won; now you have to go back to your country!'"