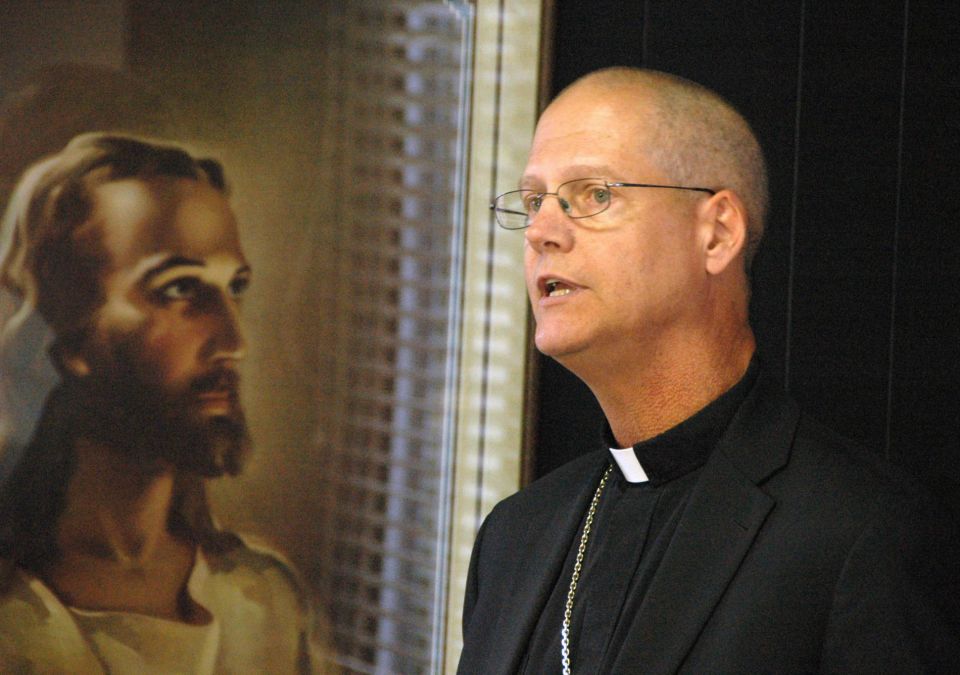 Archbishop Paul D. Etienne speaks during a news conference in Anchorage, Alaska, Oct. 4, 2017, the day Pope Francis named him the new archbishop of the Archdiocese of Anchorage. (CNS photo/Joel Davidson, The Anchor)

As a number of bishops float ideas for how the U.S. church should respond in the wake of allegations of sexual abuse by one of its highest prelates, at least one bishop's proposal stands out for its specificity.

Archbishop Paul Etienne of Anchorage, in an Aug. 1 blog post titled "The Body of Christ is Hurting," has put forth a seven-point plan "for further study and review," which suggests the immediate formation of an ad hoc committee of bishops, the creation of a National Review Board of bishops and lay people that reports directly to the Vatican and a timeline of 60 days for transparency to the wider church.

"I want the people of God to hear from bishops that we are taking this moment seriously, in light of these very sad revelations against [former Washington Archbishop Theodore] McCarrick, that there are concrete and effective things that we can do," Etienne told NCR.

Etienne was named archbishop of Anchorage in 2016, after serving eight years as bishop of Cheyenne, Wyoming. In Cheyenne, Etienne had restricted a predecessor bishop, Joseph Hart, from celebrating public liturgical services because of allegations of sexual abuse of minors that dated back to Hart's time as a priest in the Kansas City-St. Joseph, Missouri, Diocese.

Although a civil investigation of reports that Hart abused two boys in Wyoming found no evidence to support those allegations, new evidence this summer led current Cheyenne Bishop Steven Biegler to deem the allegations credible and requiring disciplinary action.

Etienne told NCR that he was "disappointed" during his seven years as a bishop in Wyoming "at the lack of response that I was able to get from the competent authorities in Rome to fully investigate and resolve that situation."

Etienne wrote his blog post with suggestions just days after McCarrick renounced his place in the College of Cardinals, following removal from ministry a month earlier when allegations of sexual abuse of a teenager were found "credible and substantiated." Subsequent reports have detailed sexual misconduct with adult seminarians and abuse of a young boy since he was 11 by McCarrick.

"Many people — priests, laity, and hierarchy — are wondering how this or any bishop might rise to the rank of the episcopacy let alone to become a cardinal in the Church?" Etienne wrote. "How could such misbehavior not be known and addressed, let alone be overlooked to allow any priest to become a bishop, archbishop or cardinal?"

To address those questions, Etienne called for a review of the process by which McCarrrick rose through the ranks of the hierarchy. In addition, the United States Conference of Catholic Bishops should "respectfully ask to define additional measures to strengthen the integrity and process by which new bishops and members of the College of Cardinals are chosen."

Etienne also noted that the Charter for the Protection of Youth and Young People, approved by the U.S. bishops in Dallas in 2002, "did not go far enough" by holding cardinals and bishops accountable to the same standards as priests and deacons accused of sexual misconduct with minors.

"This requires a prompt and firm correction," Etienne wrote.

Finally, he urged the U.S. bishops' conference to immediately convene an ad hoc committee of seven of "the most respected leaders of our conference" to write a protocol addressing sexual abuse by bishops, which would be approved by the body of bishops as soon as possible.

"We need to tell priests, deacons and lay faithful that bishops are going to be held appropriately accountable as well," he told NCR. "They need to know who to go to if it's their own bishop they're concerned about."

The bishops also need to make it easier for people to come forward with allegations against bishops, Etienne said. "There have to be no repercussions and the assurance that it will be taken seriously," he said.

He believes a new protocol should require the development of a new National Review Board, which could be comprised of the bishops from the ad hoc committee, an equal number of lay representatives and the papal nuncio, or representative to the United States, as an ex officio member.

That review board would "examine all accusations against bishops," make recommendations to the Holy See and, in the interest of transparency, make its recommendations public within 60 days of submission to the Vatican  "if no public action or response has been taken by the competent authority," Etienne wrote.

The bishops need to act quickly to be credible, Etienne said.

Because of a backlog, it may be necessary to delegate to national tribunals the responsibility of dealing with cases in their country, he said.

"I think Pope Francis needs to proceed with effort to reform the curia, but especially to change the culture," Etienne said. "I just hope and pray that he is able to continue this reform."

A version of this story appeared in the Aug 24-Sept 6, 2018 print issue under the headline: US bishops pledge to 'take steps' about abuse .

Pope's quotes: Nothing is impossible with God