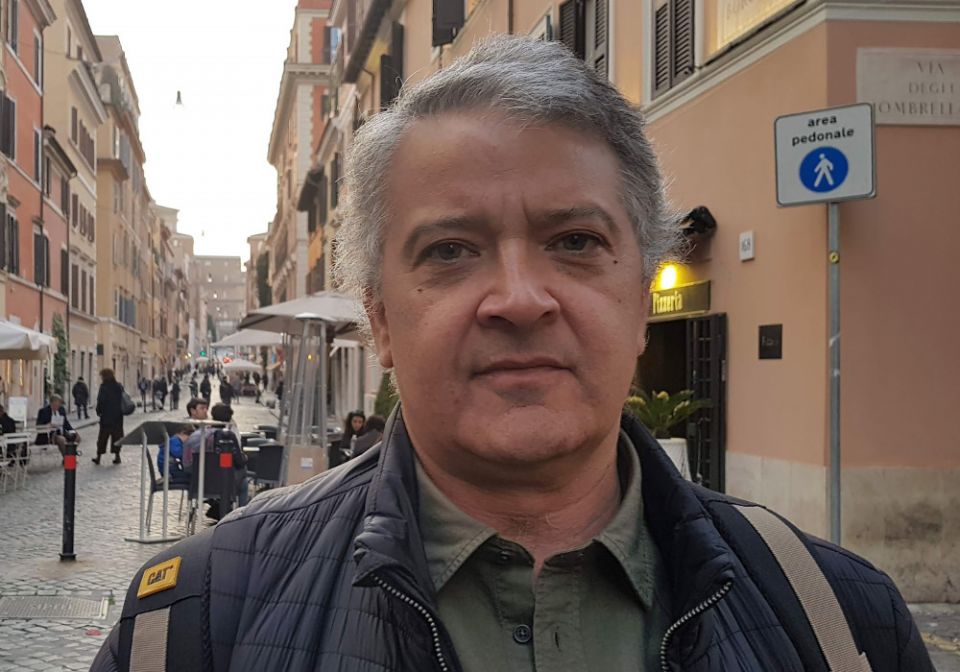 Pedro Salinas, a Peruvian journalist and former member of Sodalitium Christianae, is pictured near the Vatican in Rome Feb. 22, 2019. (CNS/Junno Arocho Esteves)

Lima, Peru — A Peruvian archbishop won a defamation suit against a local journalist in a long-running case involving alleged cover-up in an abuse scandal.

A court in Piura, on the northern coast, ruled late April 8 in favor of Archbishop José Eguren Anselmi of Piura in the suit against journalist Pedro Salinas. Salinas was given a one-year suspended sentence, fined $22,250 and ordered to do 120 days of community service. The full sentence will not be made public until April 22, but Salinas has already announced an appeal.

"This was a verdict foretold," said Salinas, who has argued throughout the process that Judge Judith Cueva should never have admitted the case.

Salinas is the author of a book detailing physical, psychological and sexual abuse in Sodalitium Christianae Vitae, a society of apostolic life founded in Peru in 1971 and formally recognized by the Vatican in 1997. Eguren was an original member of the society, known in Peru as Sodalicio.

While the archbishop objected to the content in the book, "Half Monk, Half Soldier," published four years ago, the 2018 lawsuit concerned later articles and radio commentary by Salinas concerning the society. The specific case involves Salinas' comparison of Eguren to Chilean Bishop Juan Barros, who resigned in 2018 after accusations of covering up rampant sexual abuses by priests in his country.

Salinas argued that Eguren was aware of the abuse committed by Sodalicio founder Luis Fernando Figari and others and called the archbishop "Peruvian Juan Barros."

Eguren could not be reached for comment, but his attorney, Percy Garcia, told the local media that the archbishop never wanted the case to reach this point. He said the court ruled against Salinas because there is no evidence to support his allegations against the archbishop, who he said was unaware of the actions within Sodalicio.

Carlos Rivera, Salinas' lawyer, said his client's position was supported by years of research and had been fully documented.

The Sodalicio case, like many others around the world, has sparked a host of investigations by judicial authorities in Peru, but to date no cases have been brought to trial.

The Peruvian Congress is also looking into the accusations as part of a broader investigation. The special committee is looking into sexual abuses against minors committed within institutions, including Sodalicio and another involving a Catholic high school, Hector de Cardenas. The committee heard additional testimony from Sodalicio victims in February and should present its finding midyear.

Eguren, 62, was appointed archbishop of Piura in 2006. He was the first member of Sodalicio to be named a bishop.