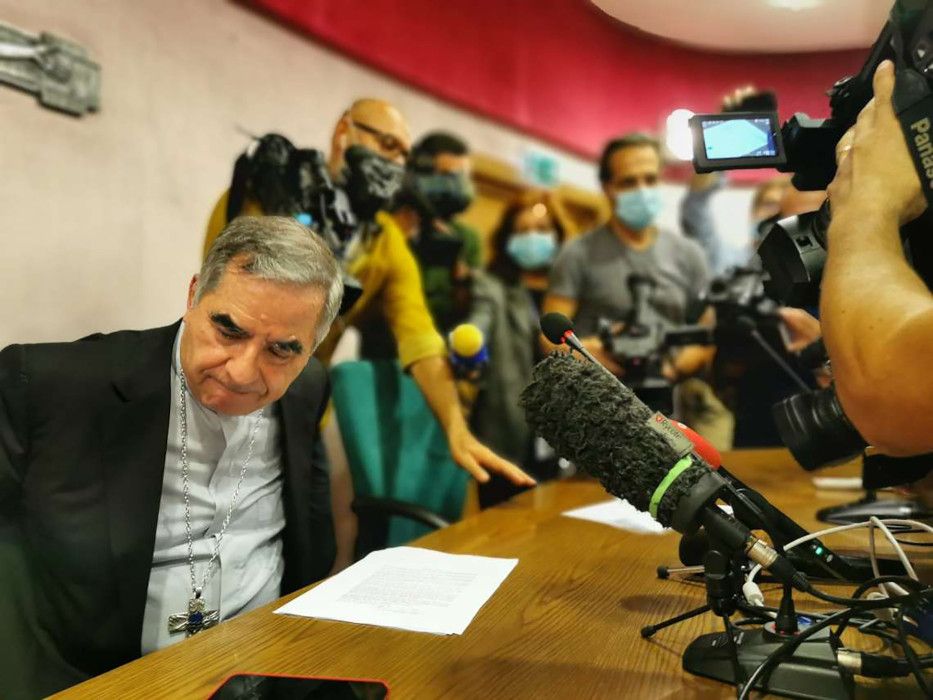 Then-Cardinal Angelo Becciu speaks with journalists during a media conference in Rome Sept. 25, 2020. Italian newspapers speculated last month that Vatican investigators were looking into whether Becciu wired 700,000 euros ($823,000) in Vatican money to a bank account in Australia, and whether that money was tied to Pell's sex abuse trial. An Australian agency said it had reviewed the Vatican information and found the threshold to start an investigation had not been met. (CNS/Junno Arocho Esteves)

CANBERRA, Australia — An Australian anti-graft agency said on Nov. 11 it was not investigating the transfer of Vatican funds to Australia because of a lack of evidence of wrongdoing, further undermining Italian media speculation that the money might be linked to the overturned convictions of Cardinal George Pell for child sex abuse.

Italian newspaper Corriere della Sera speculated in October that Vatican investigators were looking into whether Pell's nemesis at the Holy See, ousted Cardinal Angelo Becciu, wired 700,000 euros ($823,000) in Vatican money to a bank account in Australia, and whether that money was tied to Pell's sex abuse trial.

The Independent Broad-based Anti-corruption Commission said it "received information based on media reports which alleged Vatican funds were transferred to individuals in support of the recent case against" Pell.

The commission is the anti-graft agency that investigates the public sector, including police, in Victoria state where Pell was convicted in 2018.

The commission said it had reviewed the Vatican information and found the threshold to start an investigation had not been met.

"This matter would only be further considered if any additional, credible information is received," the commission said in a statement.

Victoria Police, which in 2017 charged Pell with child sex abuse, said in October it had also been advised of Vatican money transfers but had no reason to investigate.

But Australian Federal Police, which referred the allegations to the anti-graft agency, has not ruled out its own criminal investigation.

The national police service said Nov. 11 it was continuing to review "relevant information," a preliminary step toward an official criminal investigation.

Police have given no indication that any potential crime was related to Pell's conviction.

The Italian newspaper speculated that Becciu might have "bought" the testimony of Pell's accuser to get Pell out of the Vatican. Becciu and Pell were known to have clashed over Pell's financial clean-up efforts at the Holy See. Pell's accuser, who cannot be identified, has denied the allegation.

The newspaper report had no sourcing, attributions or detail and appeared to be more an effort to discredit Becciu and distract attention from the shortcomings of the Vatican prosecutors' primary investigation into a London real estate venture.

Pell was convicted by a Victoria court jury on allegations he molested two choirboys in St. Patrick's Cathedral in Melbourne while he was archbishop in the 1990s, but was ultimately absolved by Australia's High Court.

Pell was brought in by Pope Francis to bring accountability and transparency to the Vatican's opaque finances in 2014.

He returned to the Vatican last month for a meeting with Francis and to clear out his apartment after Becciu was fired over allegations that he wired 100,000 euros ($118,000) in Vatican funds to a charity headed by his brother.

Becciu has denied wrongdoing over those funds and has repeatedly denied involvement in Pell's conviction.