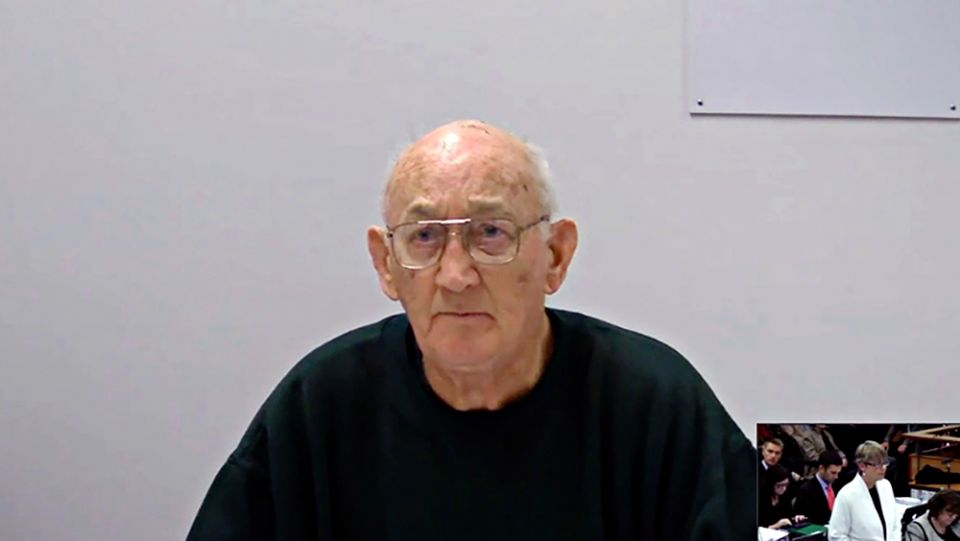 In this May 27, 2015, image made from video released by Royal Commission, pedophile priest Gerald Ridsdale gives evidence, asked by an official, lower right, during a child sex abuse royal commission, in Ballarat, Australia. Ridsdale was sentenced to more jail time Thursday, May 14, 2020, after admitting to crimes against another four boys in the 1970s. (Royal Commission/AP/AAP Image)

Melbourne, Australia — An Australian pedophile priest was sentenced to more jail time May 14 after admitting to crimes against another four boys in the 1970s.

In all, Gerald Ridsdale is known to have abused at least 69 children. He has been behind bars since 1994 after he was sentenced to 34 years.

He had been eligible for parole in 2022. But Victorian County Court Judge Gerard Mullaly on May 14 extended Ridsdale's non-parole period by another two years, by which time Ridsdale will be 90 years old.

"You knew what you were doing was profoundly wrong and harmful, but you kept doing these things to these children over and over," Mullaly said. "It seems you knew no boundaries or had any sense of restraint."

"We trusted our beautiful, innocent children with this bastard without question when we should have been more vigilant on their behalf," the elderly parents of the brothers said.

They labelled the former priest as a "filthy, conniving, make-believe priest and pedophile."

Ridsdale admitted the abuse but his lawyer Tim Marsh had earlier argued his client shouldn't spend more time behind bars. Marsh had suggested an appropriate sentence would be one that did not interfere with the earliest possible release date, and if Ridsdale had been sentenced for all his crimes at once, his jail time would not exceed the previous sentence.

However, the judge disagreed.

A government inquiry released this month concluded that Australian Cardinal George Pell knew Ridsdale had been sexually abusing children years before his arrest.

A report from the inquiry on child sexual abuse had been released in 2017, but findings concerning Pell — who was formerly Pope Francis' finance minister and at one time the third-highest ranking cleric in the Vatican — had been redacted until this month to avoid prejudicing juries in any future prosecutions.

The government decided to release the full report after the High Court last month overturned convictions against Pell on charges he molested two choirboys in a Melbourne cathedral in the late 1990s when he was an archbishop. The 78-year-old cleric spent 13 months in prison before being released last month.

Australian diocese to pay millions in settlement in one abuse case

Letters to the editor: Press Freedom; Fight against abuse cover up transcends ideologies; The church and racism