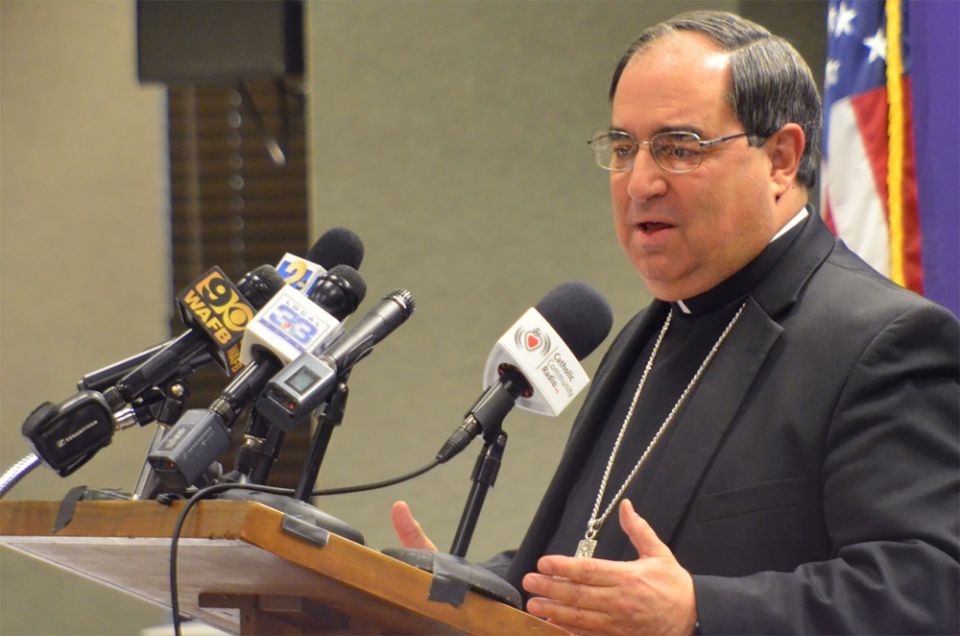 02.01.2019 Bishop Michael Duca of Baton Rouge, La., addresses media Jan. 31, 2019, in Baton Rouge at a news conference about the release of a list of priests with credible allegations of sexual abuse since the founding of the diocese in 1961. (CNS/Debbie Shelley, The Catholic Commentator)

Baton Rouge, La. — In a show of openness, transparency and a hope for healing, Bishop Michael Duca of Baton Rouge released Jan. 31 the names of all priests, a former bishop of the diocese, and one former seminarian "against whom there are credible allegations of sexual abuse of minors and/or vulnerable adults in the Diocese of Baton Rouge."

It also includes the names of individuals accused of credible allegations within the territory of the Baton Rouge Diocese before it was created in 1961 that were later reported to the diocese; as well as, those who served the Archdiocese of New Orleans in what is now Baton Rouge diocesan territory.

The bishop on the list is Bishop Joseph Sullivan, who guided the Baton Rouge Diocese from 1974 until his death in 1982. A Catholic high school that once bore his name was changed to St. Michael the Archangel High School in 2005 after an allegation against Sullivan became known.

"When I committed myself in the diocese to this task soon after my arrival, my first concern was and has been for the persons victimized by this abuse, who have often felt betrayed and unsupported by the church," said Duca. "It has been my hope that this will be an important step that will help those men and women whose lives have been so deeply violated. ... My prayer is that this list will be a sign of a new level of transparency."

According to the bishop, in late 2018, the diocese had all of its clergy personnel files — a total of 1,033 dating back to its founding — by a law firm and an accounting firm.

The list includes the year or years that the abuse took place, ranging from 1961 until the 1980s. The years the incidents were reported range widely from when they occurred, some of it being attributed to suppressed memories of the victims.

In one case, the abuse occurred in the mid-1970s but the report was not made until September, while another allegation of abuse took place between 1964-1965 but was not reported until December.

"This is not easy," said Duca. "I have listened to some victims share their stories and there are no words to express the depth of sadness and shame that was experienced in our church.

"It's hard to lay this list out for all to see but real renewal and healing cannot take place until we acknowledge the truths of the past. This list reflects the lives of real people and a path of pain and suffering that affects most deeply the persons who are victims of abuse."

The desire for real change inspires new programs, according to Duca, who said some initiatives have been implemented to address any potential problems.

"Seminaries are continually trying to review their programs and, especially now, make sure that they add programs and education and experiences that develop a person's sexual maturity," said Duca.

These programs help seminary administrators recognize "telltale signs" that a seminarian is not ready for priestly ministry.

The bishop noted that Notre Dame Seminary in New Orleans has partnered with parishes to provide an internship in which seminarians become involved in the life of the parish and the men and women of the parish participate in the seminarians' evaluations.

The sexual abuse crisis has created a lot of damage to the church and the institution of the priesthood, Duca acknowledged.

"Just across the board I think it's damaged the moral strength of the church's teaching. But I think it can be recovered, if we can in a sense recover," he said.

"I think what's happened is that we got into the mode at the very beginning of throwing up a wall of protection. And we really need to look at being more vulnerable and more attentive to the pain of the victims."

Based on the list released by the diocese, the prevalent cases of priests credibly accused of abuse occurred in the 1960s-1970s under Bishop Sullivan.

Duca said the reason for this is a "larger sociological question" that he did not have a definite answer for.

Also released were copies of letters from the bishop to be read at weekend Masses Feb. 2-3 at St. Aloysius Church in Baton Rouge about credible allegations from the mid-1960s against a volunteer worker, now deceased, Everett Gauthier Sr., and, at St. Thomas More Church in Baton Rouge, about an allegation of sexual abuse by a member of the clergy during the early to mid-1970s.

Duca, who was installed last August, said the catalyst for opening the investigation into diocesan records came after the release of the Pennsylvania grand jury reports about Catholic clergy sex abuse and the "(former) Cardinal (Theodore) McCarrick scandal," referring to abuse allegations against the former cardinal, who denies the claims.

"Those two things together just said, 'Wait a minute, this is not working,' " said the bishop. "And, it was a call, first of all, to great accountability of bishops and a greater accountability of the church."

The bishop said the list of names had been forwarded to the East Baton Rouge district attorney's office for review, though many of the men were deceased. He also said that the list was not finished.

Shelley is assistant editor and Van is a staff writer at The Catholic Commentator, newspaper of the Diocese of Baton Rouge.