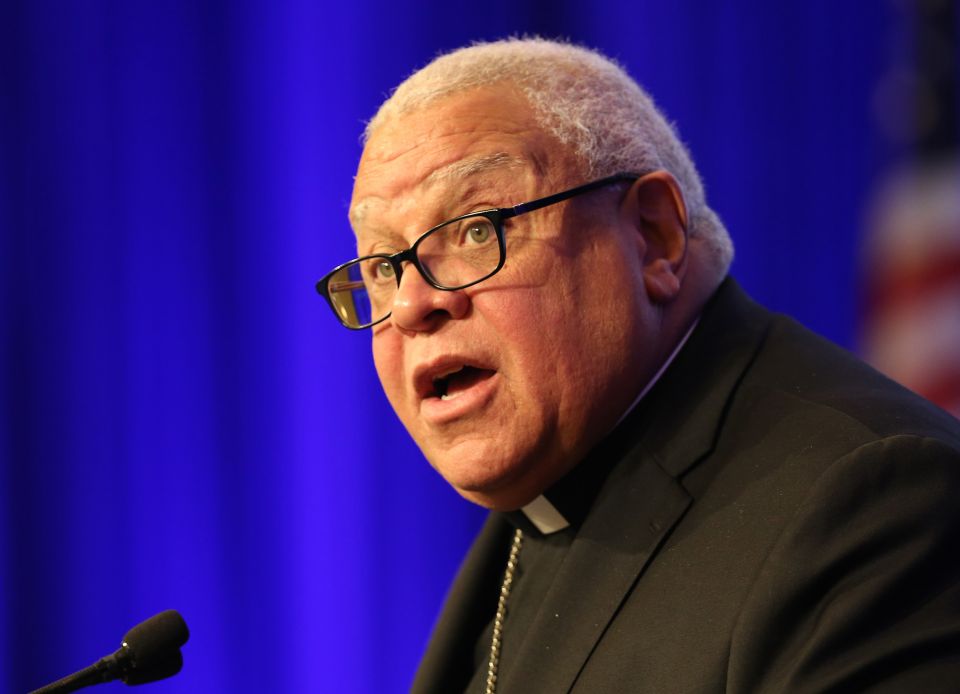 Bishop George Murray is pictured in a 2017 photo. (CNS/Bob Roller)

Youngstown, Ohio — On his first day back at work Sept. 4, Bishop George Murry of Youngstown spoke happily of his return, but he also addressed the somber subject of the sex abuse crisis now in the news.

In April, he was diagnosed with acute leukemia and admitted to the Cleveland Clinic, where he received aggressive chemotherapy for a month. After his discharge, he received follow-up treatment and spent time resting and recovering.

He thanked all those who supported him and provided his medical care.

"My energy level is almost back to normal. I look forward to returning to work and reconnecting with the people of the diocese -- part time for a short time, then later, full time," Murry said.

The next day, he presided at a weekly prayer service for diocesan staff at St. Columba Cathedral that began after his diagnosis, expressing gratitude to all for their prayers.

"Prayer is powerful. That is what got me through," he said.

While speaking to reporters at the Sept. 4 news conference, he addressed the recent controversies in the clergy sex abuse scandal and calling for greater openness in the church and promising more concrete action from the Youngstown Diocese.

Specifically, he said the diocese would release the names of diocesan priests removed from ministry because of a credible accusation of abuse, and he welcomed county prosecutors in the six-county diocesan area "to review our files on priests who have been credibly accused."

On the broader church level, he said files relating to Archbishop Theodore McCarrick should be "opened to a group of competent laypeople, to determine how his predatory behavior went unreported."

"At the same time mechanisms must be developed to report allegations against other bishops so that they can be adequately investigated," he added.

In response to a question about the "testimony" from Archbishop Carlo Vigano, former papal nuncio to the United States, which accused Pope Francis of covering up allegations about McCarrick, Murry said the letter seems to have a tone of "settling scores" and "nothing he said is substantiated."

He also encouraged Francis to more fully explain his position.

Murry, taking questions about his health, expressed gratitude for all who supported him and said the experience strengthened his faith.

He said he was overwhelmed by the many people "who sent any cards, letters, emails, books, prayer chains, homemade gifts and food," citing one letter from an 18-year-old and another from a 10-year-old girl who sent a picture of herself and her cat and a $5 bill "to help with your medical expenses."

He also quipped that he might start spending more time outside the office because the office seemed to run fine without him.

Lori: Church has many reasons to get right response to child sex abuse