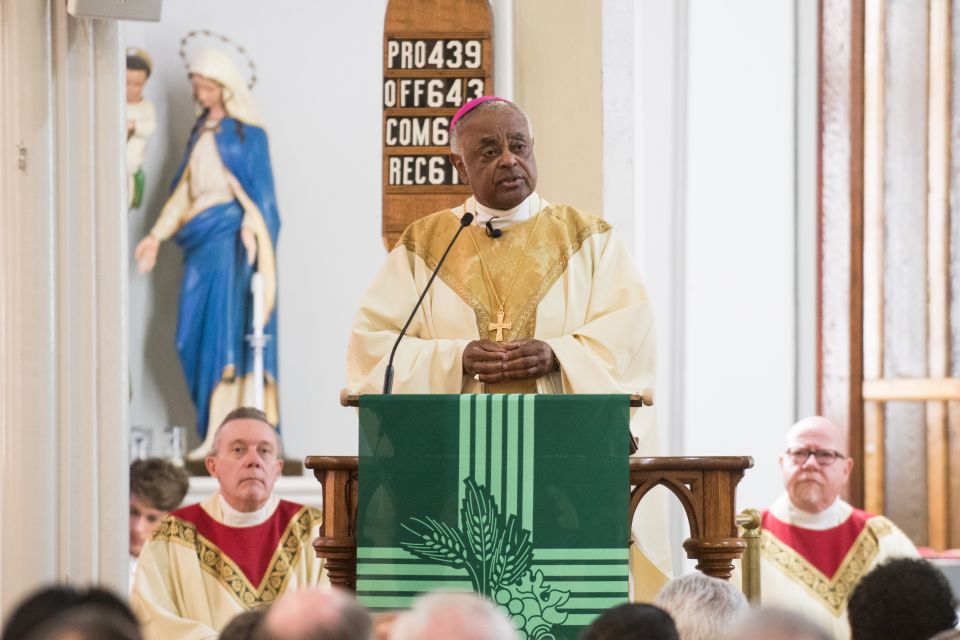 Archbishop Wilton Gregory of Atlanta gives the homily in St. Patrick Church in Charleston, S.C., with other prelates attending the Provincial Assembly of Priests and Bishops Aug. 20-22. (CNS/Catholic Miscellany/Douglas Deas)

Charleston, S.C. — Priests and bishops from the Province of Atlanta recently spent time considering the abuse crisis in the church, how to respond to it and how to best carry on in serving the faithful.

The discussion took place during the Provincial Assembly of Priests and Bishops, Aug. 20-22 at the Francis Marion Hotel in Charleston.

The gathering's theme, "Catholic Parishes of the 21st Century," was meant to give the prelates and clergy a chance to look at trends in thought and practice among people in the pews and develop more effective ministry at the parish level.

They reflected on that information against the backdrop of recent news, including the Pennsylvania grand jury report documenting sexual abuse in Pennsylvania dioceses, as well as Archbishop Theodore McCarrick's resignation in the wake of abuse allegations.

Discussions focused on ways to reach out to increasingly large and diverse parishes in the Southeast, how to reach millennials and others leaving the church and how to improve communication among pastors, parish staff and the laity. Workshops were led by Charles Zech and Michael Castrilli from the Center for Church Management and Business Ethics at Villanova University.

Participants said the information will be helpful as priests and bishops consider ways to help the church confront the latest crisis.

Atlanta Archbishop Wilton Gregory said in an interview with The Catholic Miscellany, diocesan newspaper of Charleston, that the meeting provided an important chance for the region's leaders and clergy to talk and pray together during an era that he called "probably the most destructive moment we have faced as a church in our nation."

Gregory urged the faithful around the Atlanta Province to share their feelings and opinions in response to the abuse crisis.

"I would ask the people to speak boldly to their priests, to share their anger and their hearts' concerns," he said. "I would also ask them to face this moment with trust and confidence in Christ and not necessarily in individuals."

Other bishops in attendance were Bishop Robert Guglielmone of the Diocese of Charleston, Bishop Peter Jugis of Charlotte, Bishop Luis Zarama of Raleigh and Bishop Gregory Hartmayer of Savannah, plus Atlanta Auxiliary Bishops Bernard Schlesinger III and Joel Konzen.

The clergy attended a Mass at St. Patrick Church on Aug. 21, celebrated by Gregory. Many of the priests who attended concelebrated from the pews, reciting the prayers and extending their hands in prayer during the consecration. Members of the parish sat beside them and joined in song and prayer.

In his homily, Gregory said it was more important than ever for the clergy and the laity to remember the value that Christ placed on humility. It is an important time, he said, for the church's leaders to remember the importance of children and the respect owed to them.

"There is a different order in God's kingdom, where being little is more important than being significant," he said. "We have been reminded recently of that proper order, and the reminders have not always been easy. God continually calls us back to the order of his kingdom, where the little ones are the first and the important ones are their servants."

During closed discussion periods, the priests had the chance to share their feelings and concerns about the recent abuse revelation with the bishops. Hartmayer said the emotions expressed ranged from anger to disgust.

"It was important for the priests to have the opportunity to share their concerns as to what is going to be done to prevent this moral crisis from ever happening again," Hartmayer said.

Jugis said the assembly was valuable because it offered a chance both to confront the abuse crisis and consider ways to better serve the faithful in a province where the Catholic population is booming.

"It is beneficial for us to consider how to prepare for the growth that is still expected," Jugis said. "I would ask both the clergy and the laity to remember that we are all here to serve Christ the Lord."

Guglielmone said the assembly's theme and the discussions on ways to confront the future were especially important.

"We recognize that for many people there may be anger and disappointment right now, and a fear that the church they knew and loved is falling apart," Guglielmone said. "By looking at ways to make the parishes stronger, we're also considering ways to rebuild the sense of trust in the people we serve, to focus on what we're all about and to do what they have entrusted us to do, which is to spread the Gospel."