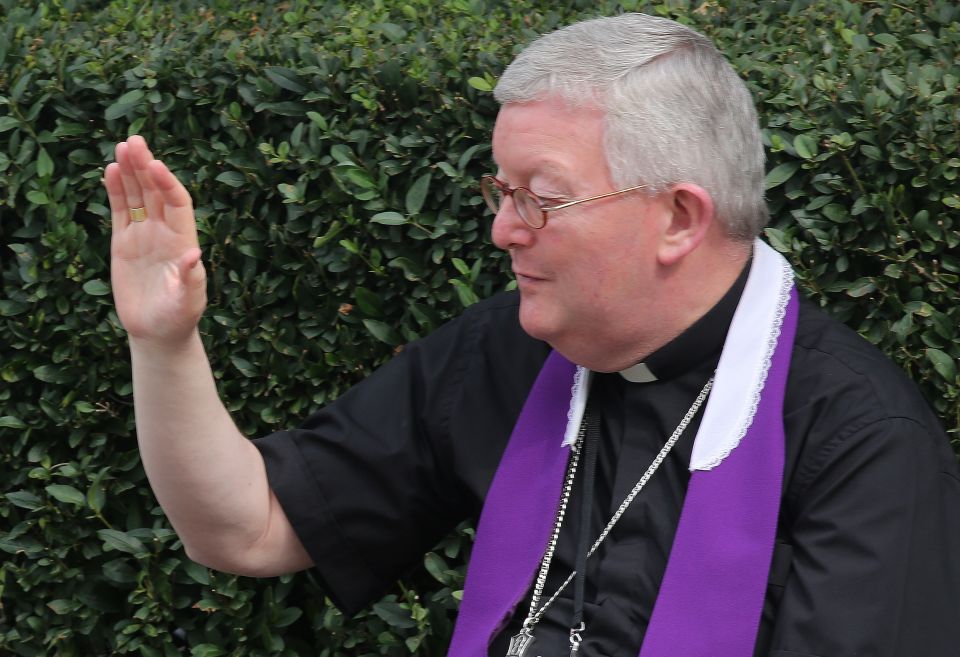 Archbishop Bernard Longley of Birmingham, England, blesses a World Youth Day pilgrim after hearing her confession in 2016 in Krakow, Poland. Longley publicly apologized Nov. 16 to the victims of child abuse during a government-backed inquiry which shed light on allegations against priests over half a century. (CNS /Bob Roller)

Manchester, England — A Catholic archbishop publicly apologized to the victims of child abuse during a government-backed inquiry that shed light on allegations against priests over half a century.

Some of the allegations were made against Fr. John Tolkien, the son of JRR Tolkien, the best-selling author of "The Hobbit" and "The Lord of the Rings" trilogy.

Archbishop Bernard Longley of Birmingham, England, acknowledged failures of the church to protect children in his testimony Nov. 16 to the Independent Inquiry into Child Sex Abuse in London. He assured the inquiry of his commitment to the protection of children and vulnerable adults.

The inquiry is investigating child abuse throughout various United Kingdom institutions and heard evidence of abuse in the Birmingham Archdiocese during a five-day hearing Nov. 12-16.

"I am deeply sorry. I apologize. I apologize to those survivors and those victims of abuse for what they have suffered with the archdiocese over the years," the archbishop said.

"I apologize to them and I would certainly wish to seek some way of lifting the burden. I know that apologies feel that they come too late and are inadequate and I accept that," he continued.

"I believe that being here this week has been revealed some serious mistakes and I wish to learn from them," Longley added. "I can only say that I hope it's not too late. I represent a church whose message is that it's never too late but that's not for me to say in relation to victims and survivors of abuse."

Longley was questioned for hours about the church's child protection procedures and about his own attitude toward child protection, and answered that he has met victims of abuse of numerous occasions.

The archdiocese is one of the worst afflicted by clerical abuse in England and Wales and was nominated in 2016 as a case study to represent the church nationally.

Cardinal Vincent Nichols of Westminster, president of the Bishops' Conference of England and Wales and archbishop of Birmingham from 2000 to 2009, was expected to face the inquiry but fell ill during a memorial service for war dead Nov. 11 and was unable to attend.

He was expected to answer questions about the way the archdiocese had handled abuse allegations by several priests, including Tolkien, who died in 2003.

Tolkien was alleged to have ordered Boy Scouts to strip while working in a Birmingham parish in the 1950s.

The archdiocese was made aware of similar complaints against him in 1968, according to a note from the time which was cited by the inquiry, but declined to pass them on to the police even though there were strong indications the priest might have admitted the abuse.

Instead, there was a suggestion that Tolkien was sent for treatment and he returned to active ministry soon afterward only to be accused of sex offences against another boy in 1970.

Jacqueline Carey, legal counsel for the inquiry, revealed that in 1993 Archbishop Maurice Couve de Murville, serving in Birmingham at the time, told a complainant that he would not act because Tolkien was in poor health and was going to retire.

Police finally were alerted in 1994, but no action was taken until 2001. An investigation resulted in a decision not to prosecute. Another allegation was made against Tolkien in 2002.

Christopher Carrie, a former Boy Scout from Birmingham, was paid more than $19,000 in compensation in 2003 after he sued the church over the abuse he said he suffered at the priest's hands.

In a Nov. 12 statement from the bishops' conference, Nichol was certified "unfit" to attend the hearing because of an illness.

Carey said that the inquiry had been notified that the cardinal would not be well enough to appear for three weeks and arrangements would be made for him to testify Dec. 13.