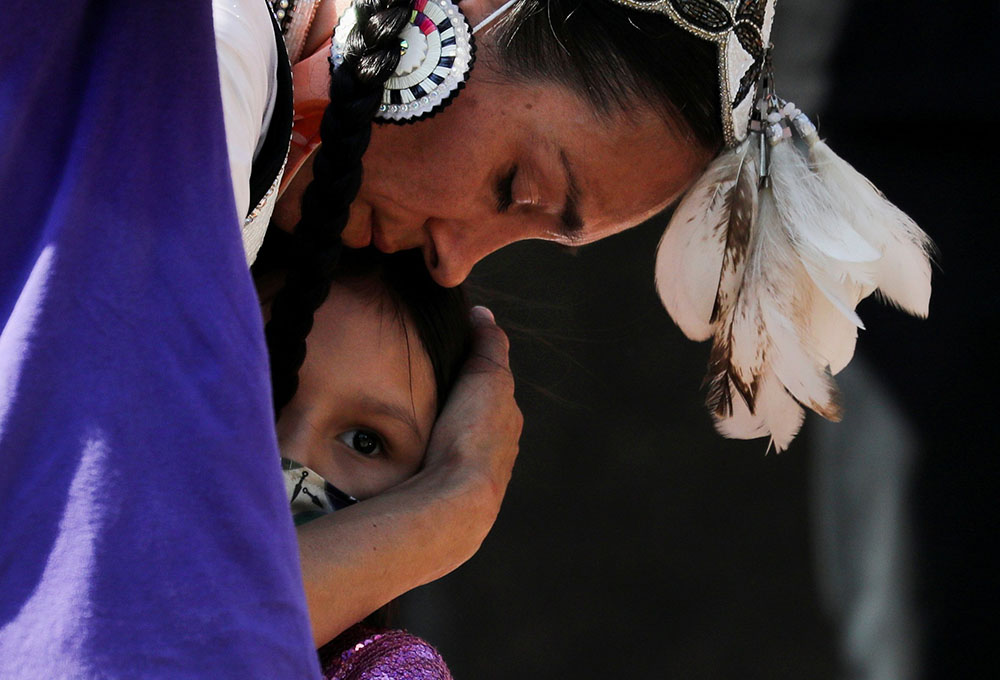 A woman embraces her daughter during a rally at the former Kamloops Indian Residential School in Kamloops, British Columbia, June 6. (CNS/Reuters/Chris Helgren)

Late last month, the Tk'emlups te Secwepemc First Nation community announced its grim discovery of 215 graves at the Kamloops Indian Residential School in British Columbia. The news of so many children's bodies, interred beneath the windswept grounds of an old Catholic facility, run for nearly 80 years by the Oblates of Mary Immaculate, astounded white audiences and affirmed a horror that First Nations people have lived with for generations.

Between the 1880s and the 1990s, approximately 150,000 First Nations children were put into residential schools in Canada, mostly Catholic institutions. Thousands of those children, including the ones found at Kamloops, never returned home.

But the Kamloops graves are part of a history of Catholic missions to Native peoples that spans Canada and the United States. The horrors of the Kamloops School are also horrors of other North American Catholic institutions.

One horror of Kamloops, like that of other Catholic residential and boarding schools, is that priests and sisters sought to claim and control Native young people so entirely: in body as well as soul, in life and also death. 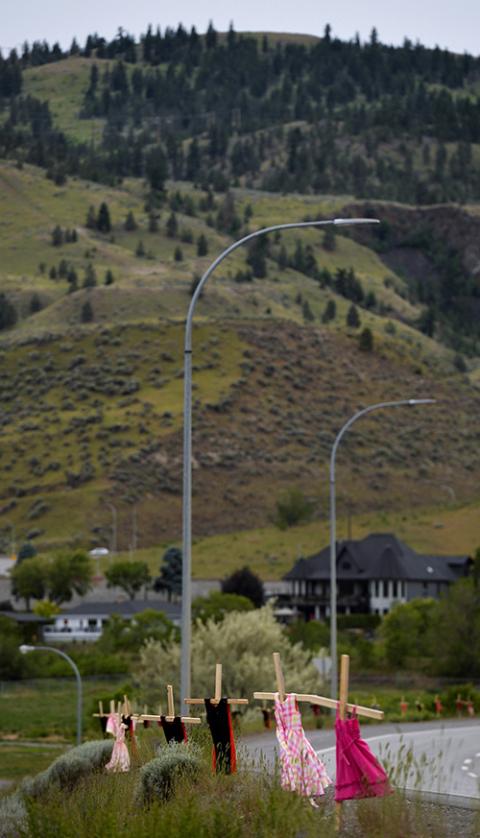 They enforced rules, with vicious punishments, about how students should bathe and cut their hair. They issued them clothing to wear. They monitored them when they slept at night. They prohibited certain forms of kinship and friendship. They decided who should and should not receive medical care. And they buried students when they died.

The Canadian government's Truth and Reconciliation Commission documented a widespread practice of residential school personnel — often Catholic priests — burying the bodies of children who died from accidents, illness, suicide and other causes, without regard for the wishes of relatives.

"Parental requests to have children's bodies returned home for burial were generally refused," the report explains. "Children who died at school were buried in school or in mission cemeteries, often in poorly marked graves."

But there is also a second horror that stalks the Kamloops graves: that of Catholic authorities who have normalized the disappearance of Native children. There is a telling discrepancy at the heart of the Kamloops School story: Although the Tk'emlups te Secwepemc search team reported 215 graves, the Truth and Reconciliation Commission documented only 51 student fatalities at the school.

In other words, most children buried at Kamloops died deaths for which records — if they existed at all — have been destroyed or withheld from First Nations communities and the public. The Tk'emlups te Secwepemc search was not solely to repatriate known dead (as important as those processes are), but also to learn fates of the disappeared, or children who went to school and vanished.

According to a Canadian Broadcasting Corporation report, the Canadian government destroyed some Kamloops School records. But the unmarked and unrecorded graves at Kamloops also fall on Catholic institutions.

Survivors and family members remember silence from Catholic school personnel when students fell ill or died during the 20th century. And while the Oblates turned over Kamloops School records that they "deemed to be relevant" to the Truth and Reconciliation Commission, the CBC report found that the Sisters of St. Anne* — who served as teachers and nurses at the Kamloops facility — have declined to authorize disclosure of records to Canada's Truth and Reconciliation archival repository.**

This sort of behavior by Catholic actors is not unusual; many Catholic institutions in Canada shared no archival material with the commission.

Each time priests and religious teaching at Kamloops School allowed a student to die, without alarm or mention, and each time Catholic institutions today fail to disclose records that might tell the truth of students' fates, they reproduce a logic of Native vanishment. The unnoted Kamloops graves tell us that Catholic missions were organized not only by a mandate to care for Native children, in body and soul, but also by reasoning that Native people are inclined to vanish, and that disappearances are unremarkable when they do.

Not coincidently, Native vanishment is also the organizing principle of settler colonialism. Both Canada and the United States are settler colonies. In both places, nation-building posits a future where Native peoples, as self-directed peoples, no longer exist.

In the 19th and 20th centuries, this colonial way of thinking translated to the assimilative work of residential schools. It translated, too (as it still does), to settler habits of disregard — patterns of failure to confront the lives and deaths of Native people who are situated, by definition, so precariously amid the settler body politic.

When Catholic missionaries allowed students to die, and when they failed to attend to their deaths, they practiced the same habits of disregard.

The logic of Native vanishment circulated through Catholic missions in the United States as well, where it could serve as a cover for sexual abuse. I am currently researching clerical sexual abuse of young people at those missions. Sometimes this abuse happened in boarding schools similar to the Kamloops School, and sometimes it happened in non-residential settings, where priests found other ways to violate children's bodies.

Catholic sexual abuse in Native communities has characteristics that distinguish it from abuse elsewhere. One distinctive quality is the tendency of Catholic authorities — priests, but also bishops and superiors who decide their fates — to argue against accountability by citing Native victims who disappear.

One priest from Minnesota, for example, self-disclosed sex with Native youth on the Rosebud Reservation during the 1970s. The priest later argued that his return to ministry would cause no scandal, because his victims were invisible, having never publicly come forward.

In another instance, a Lakota man wrote an excruciating six-page letter, in which he described a priest abusing him as a child. That priest was exonerated by his diocese. Diocesan officials questioned the accuser's credibility, because he was incarcerated when he penned his letter, and cited their inability to locate the man after he left prison.

These are not isolated incidents; the Catholic Church has a habit of conducting religious business under the assumption that Native people vanish. This reasoning shaped Catholic missions, in different ways, throughout U.S. history. More recently, it has shaped Catholic tactics for downplaying abuse that happened there.

Here in the United States, there is little indication things will change. Neither the U.S. government nor U.S. Catholic institutions have lent support to truth-telling about boarding schools (though there have been rare exceptions, such as the Red Cloud Indian School on the Pine Ridge Indian Reservation).

In the absence of institutional initiative, this work has fallen to Native journalists and activists, and school survivors themselves. Each time church authorities deny them access to the documents they need to understand the abuse that happened at Catholic missions, and each time Catholic institutions pass up opportunities to support this work, they too reproduce assumptions about who is visible and who is vanished, about who the church is accountable to, and those it can afford to ignore.

So long as inaction remains the norm, American Catholics who are also settlers on Native lands will register astonishment, again and again, when graves are discovered at mission institutions like the Kamloops School.

A version of this story appeared in the July 9-22, 2021 print issue under the headline: Graves in Canada reflect Catholic logic of Indigenous vanishment.