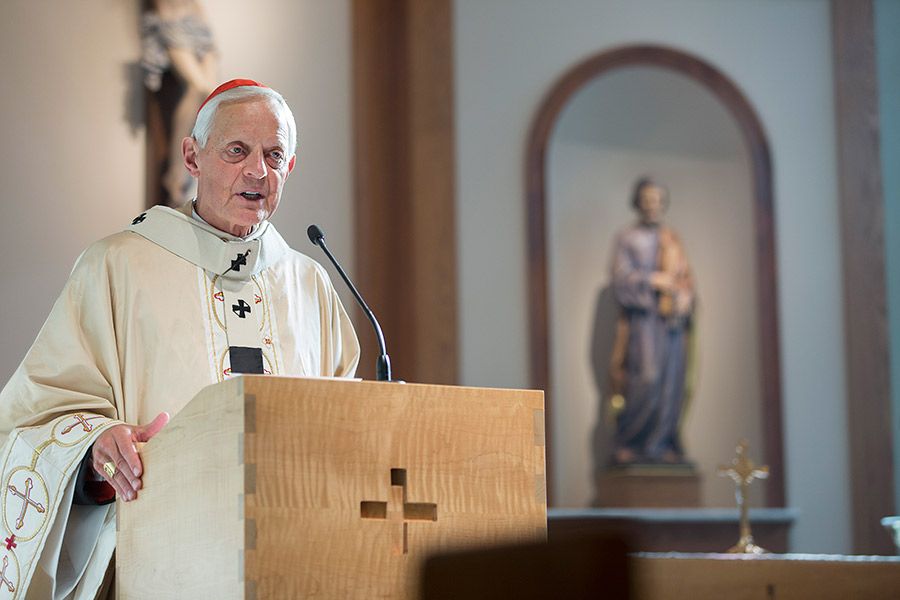 Cardinal Donald Wuerl of Washington is pictured in an undated photo. Addressing the crisis that the Catholic Church is facing following this summer's revelations of clergy sexual abuse, Wuerl at a Sept. 2 Mass at Annunciation Parish in Washington said moving forward and purifying the church will require "wider lay engagement, more realized accountability and evident transparency." (CNS/Catholic Standard/Jaclyn Lippelmann)

In remarks after Communion, at the installation Mass for a new pastor at Annunciation Parish in Washington, Wuerl said the church must follow a pathway to holiness and bring "Christ's renewing light" to the darkness of the abuse crisis and the pain it has caused.

The way forward must involve "a renewed commitment on the part of each priest to do what in fact the vast majority of priests do so well every day. You and I must continue to support them as they carry out their ministry that is such a significant part of the healing."

The cardinal also stressed the importance of church accountability and engaging the laity in the wake of the resignation of retired Washington Archbishop Theodore McCarrick over abuse allegations and the Pennsylvania grand jury report documenting clergy sexual abuse against minors over the past seven decades in six dioceses, including Pittsburgh, led by Wuerl from 1988 until his appointment as archbishop of Washington in 2006.

Since the release of this report, Wuerl has faced strong criticism and calls for his resignation for his record in confronting clergy sexual abuse in the Pittsburgh Diocese.

Following canon law, the cardinal submitted his resignation to Pope Francis in 2015 when he turned 75. The pope has not accepted it.

In an Aug. 27 letter to staff of the Archdiocese of Washington, Msgr. Charles Antonicelli, vicar general and moderator of the curia, said that in the Diocese of Pittsburgh, then-Bishop Wuerl reached out to abuse survivors, removed all priests with credible claims of abuse against them, and was a leader in child protection.

At the end of the Sept. 2 Mass, installing Msgr. Michael Mellone as pastor, Wuerl said the prayers of Catholics are for the whole church wounded by the shame of the actions that caused the abuse crisis. "You too bear a deep wound, because you love the church -- that's why you're here, and you do not know what is coming next."

He acknowledged the "pain, confusion and disillusionment" that Catholics feel, and he said he wished he could wipe it all away.

"As we move forward, I hope to lead by action, not just by words," he said, and then quoted part of what he had written in an Aug. 30 letter to priests in the archdiocese: "I ask you for prayers for me, for forgiveness for my errors in judgment, for my inadequacies, as well as for the grace to find, with you, ways of healing, ways of offering fruitful guidance in this darkness."

Near the end of his remarks, a man shouted: "Shame on you!" and stormed out of church.

This was right after the cardinal had asked the congregation to "hold close in our prayers and loyalty to our Holy Father, Pope Francis. Increasingly, it is clear that he is the object of considerable animosity."

After the man's outburst, Wuerl said he wished he could redo decisions that he had made in his three decades as a bishop "and each time get it right." He encouraged people to join him in seeking God's grace and mercy as the church moves forward. He asked for their prayers for him, and for all those who were abused and all those suffering in the aftermath of abuse.

"We do all of this first in prayer, mindful that the source of our contrition, of our healing, and of our pathway into the future is the victory Christ won for us on the cross," he said.

The cardinal received applause at the end of his remarks.

Paul VI could be canonized in 2018, diocesan newspaper says