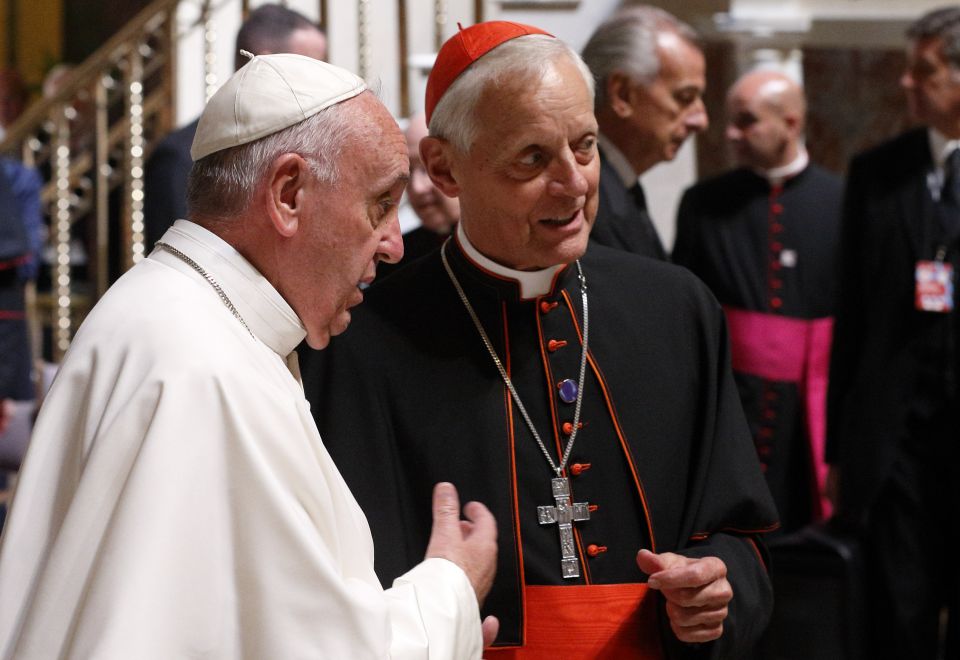 Pope Francis talks with Cardinal Donald Wuerl of Washington during a meeting with U.S. bishops in the Cathedral of St. Matthew the Apostle in Washington Sept. 23, 2015. (CNS/Paul Haring)

Washington — Cardinal Donald Wuerl of Washington encouraged archdiocesan parishes to participate in a six-week "Season of Healing" to counter what he called "confusion, disappointment and disunity" and to help bring about healing in the wake of recent sex abuse scandals that have rocked the U.S. Catholic Church.

The proposed observance will begin Sept. 14, the feast of the Exaltation of the Holy Cross, and was described by the cardinal as "a first step in the necessary healing process for our church" in a Sept. 6 letter to priests of the archdiocese.

Other prayer services for healing have been planned in the archdioceses of Newark, New Jersey, and Chicago.

In his letter to priests, Wuerl said parishes will be provided with materials to help them "bear witness" to abuse survivors' pain and assist in healing individual survivors and the entire community.

The cardinal explained that this set-aside time would be for "parishes and parishioners to come together in prayer, to give voice to the pain and suffering of the survivors of clergy sexual abuse, while also recognizing the pain and wound of the whole church."

"This six-week 'season' would use each Friday as a time when, as a church, we could be united in prayer," the cardinal wrote. "This could take whatever form of prayer you consider appropriate or are currently undertaking at your parish on Fridays."

He said he would initiate the observance with Mass Sept. 14 at the Cathedral of St. Matthew the Apostle in Washington.

The archdiocese is providing priests with a resource toolkit that includes information from the archdiocesan Child Protection Advisory Board on how to respond to victims of abuse and also ideas on how to observe the Friday prayer gatherings.

The cardinal said the idea for this effort came from a Sept. 3 meeting with archdiocesan priests discerning how he could best serve the church.

Acknowledging the "path to healing will be long and arduous," Wuerl said the six-week effort "is just a beginning ... the work of healing must and will continue."

"This special time is intended to call attention to our need to pray and to reach out to survivors throughout the year." He noted that he was also planning a one-day healing retreat for survivors of abuse. "The focus will be on prayer, professional services, including having licensed counselors present, and continued accompaniment."

Wuerl's invitation comes as he has been both supported and criticized for his handling of clergy sexual abuse cases while he was bishop of Pittsburgh. In mid-August, a Pennsylvania Grand Jury report detailed the sexual abuse suffered by more than 1,000 survivors by 300 priests over seven decades throughout that state, including in Pittsburgh, which was led by Wuerl from 1988 until he was named archbishop of Washington in 2006. Wuerl has defended his record in Pittsburgh, saying he reached out to survivors there, removed all priests credibly accused of abuse, and enacted strong child protection measures.

The grand jury report followed the resignation of Archbishop Theodore McCarrick, retired archbishop of Washington, from the College of Cardinals, after he had been credibly accused of abusing a minor nearly 50 years ago when he was a priest of the Archdiocese of New York. Reports also surfaced that settlements had been made in the New Jersey dioceses of Newark and Metuchen, where he had earlier served as a bishop, related to his alleged sexual misconduct with seminarians.

In Newark, Cardinal Joseph Tobin designated Sept. 14 as a day of prayer, fasting and abstinence throughout the archdiocese in recognition of the sins and crimes of sexual abuse against children and adults by members of the Catholic Church.

Focusing on the theme "Behold the Wood of the Cross," the cardinal plans to lead an evening prayer service at the Cathedral Basilica of the Sacred Heart in Newark.

Elsewhere, Mundelein Seminary at the University of St. Mary of the Lake in Mundelein, Illinois, is launching a nine-day novena for healing in the church from Sept. 7 to 15.

The public is invited to attend nine Masses at parishes throughout the Archdiocese of Chicago or to participate online by signing up to receive the novena prayers via email at www.usml.edu/novena.

"This prayerful response to the crisis serves as a powerful witness of the hope we find in our faith, even in the darkest times," Fr. John Kartje, seminary rector, said in a statement. "It also provides our seminarians and the entire seminary community the opportunity to engage with parishioners in their local churches throughout the Archdiocese of Chicago and spend time with them in prayer."

Locations of the Masses were listed online. The opening and closing Masses will be live streamed at www.usml.edu.