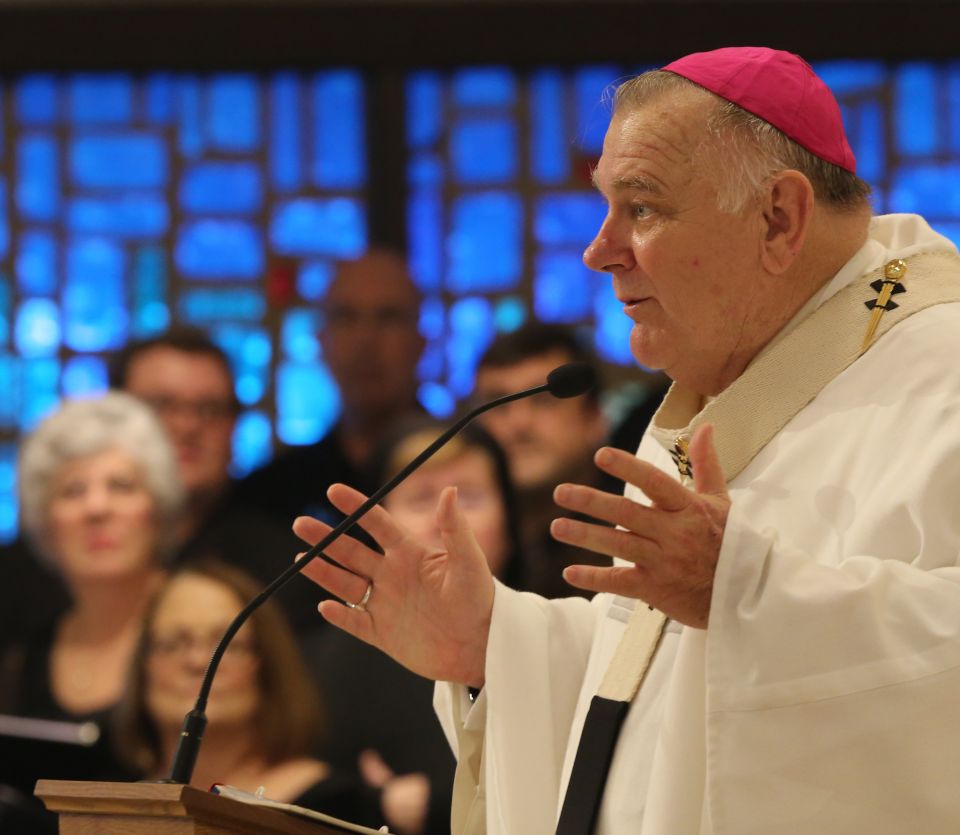 The crisis the Catholic Church is facing is not "a crisis of faith" or "mainly about a crisis of sexual abuse by clergy," but is "a crisis of leadership," Miami Archbishop Thomas Wenski said in a Sept. 18 homily. He is pictured in early June during the U.S. Conference of Catholic Bishops' annual spring assembly in Fort Lauderdale. (CNS/Bob Roller)

Miami — The crisis the Catholic Church is facing is not "a crisis of faith" or "mainly about a crisis of sexual abuse by clergy," but is "a crisis of leadership," Miami Archbishop Thomas Wenski said in a Sept. 18 homily.

"Our people still do believe in God; but they don't believe in us," he said. "Of course, they're supposed to believe in the Lord, not us; but if we are going to lead them -- as bishops, as pastors and parish priests -- they need to be able to trust us."

The archbishop preached to all of Miami's archdiocesan priests during vespers at the start of their annual convocation Sept. 18-20.

He talked about the major developments regarding clergy abuse in recent months, saying they "have reopened wounds that many thought were cauterized in 2002 when bishops adopted 'zero tolerance' policy [about] those who abused minors and vulnerable adults."

He cited the Pennsylvania grand jury report on allegations of sex abuse of minors by clergy and other church workers over a 70-year period in six Catholic dioceses in that state and "the fallout over the disgrace" of Archbishop Theodore McCarrick, former cardinal-archbishop of Washington, and a former nuncio's "testimony" implicating Pope Francis "in having ignored evidence of McCarrick's abuse."

"The grand jury report did acknowledge that since 2002 an almost negligible number of priests have offended," Wenski said. "But anger, especially toward church leadership who in the past failed to address abuse, shows that 2002 came too late for too many victims."

He quoted St. Paul to the Corinthians, "In wisdom made perfect, instruct and admonish one another," and said these words "should remind us that as a presbyterate we are accountable to one another and to the people we are ordained to serve. But also, if we allow the word of Christ, 'rich as it is' to dwell in us, then we know too that we are also accountable to the Lord."

Wenski told the priests he hoped they have been "reading the Office of Readings these days," because if so they would be reading from St. Augustine's sermon on pastors.

"He is not kind to those who 'when they took the milk and covered themselves with wool, they neglected the sheep' seeking their own cause and not Christ's," the archbishop explained. "Later on, in the sermon … St. Augustine asks: 'But will there be shepherds who seek what is Christ's and not what is theirs, and will they be found?'"

"There will indeed be such shepherds," the saint answers, "and they will indeed be found; they are not lacking, nor will they be lacking in the future."

Said Wenski: "May we be such shepherds -- and may we, through mutual accountability, help one another to be those shepherds."

Accountability | Catholics believe in God but 'don't believe in us,' Archbishop Wenski says

Eva Fleischner, Jewish-Catholic scholar, leaves behind a 'memory of goodness'