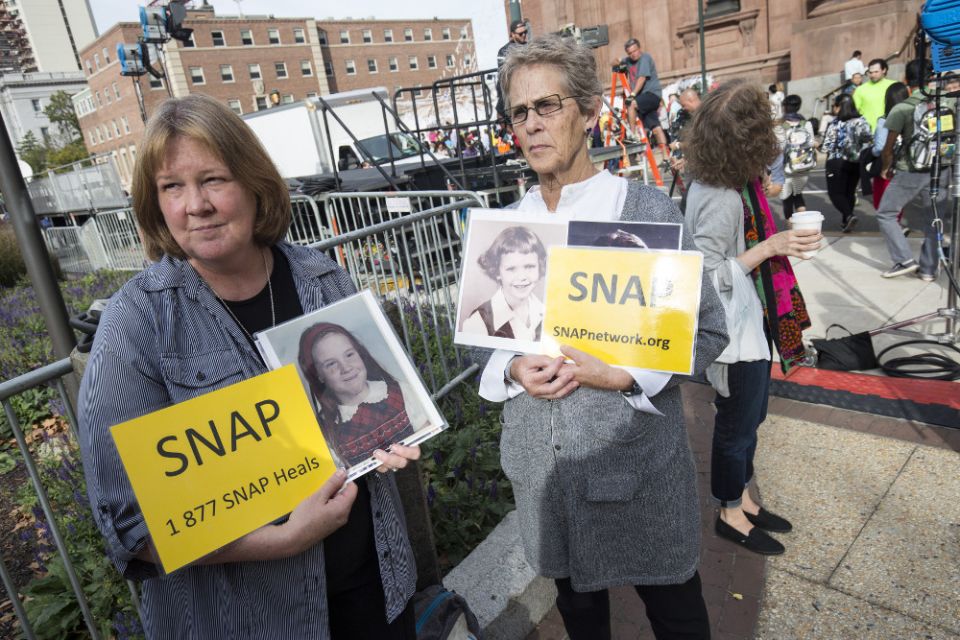 Becky Ianni of Burke, Va., and Barbara Dorris of St. Louis, both members of Survivors Network of those Abused by Priests demonstrate in front of the Cathedral Basilica of SS. Peter and Paul in Philadelphia Sept. 25, 2015. (CNS/Joshua Roberts)

Portland, Ore. — When stories of sexual misconduct by powerful men began to fill the news this fall, Manny Vega immediately flashed back to his childhood.

He saw strong similarities between the recent allegations against producers and politicians and his own abuse as a child by his parish priest.

"The parallels are in the power dynamics," said Vega, a former police officer and decorated Marine who lives in Oxnard, California. "Whether you're the leader of a church or the leader of a film studio, you're going to be someone people look up to and someone people go to for guidance. It puts the victim at a horrible disadvantage."

While there are key differences, the sexual harassment detailed in today's headlines shares the same well-worn themes that made it so hard for Vega and hundreds of other clergy abuse victims to come forward more than a decade ago: fear of retribution and disbelief, impossible power dynamics and confidential settlements that bury complaints.

Powerful Hollywood producer Harvey Weinstein is under investigation for sexual assault in four cities, and has been accused of everything from unwanted come-ons to groping by dozens of women, including A-list actresses. He has apologized for his behavior with women but denied having nonconsensual sex. He has not been charged with a crime.

A cascade of accusations

In the fallout, dozens of other high-profile men — actors, producers, politicians, journalists, chefs and TV hosts — have been publicly accused of misconduct, and dozens have resigned, been fired or suspended, or experienced political or professional losses due to the allegations.

And like Weinstein, the clergy abuse scandal featured a larger-than-life character who resigned in disgrace: Boston's Cardinal Bernard Law. Law, whose failure to stop child molesters in the priesthood triggered the worst crisis in American Catholicism, died earlier this week at age 86.

The revelations have reopened wounds for clergy abuse victims who tried to raise the national consciousness about the dangers of complicity by exposing their trauma to the nation.

The Catholic church has paid out more than $3 billion to settle clergy abuse cases since 1950, including a record-breaking $660 million settlement in Los Angeles a decade ago. Archdioceses in Boston, Los Angeles and elsewhere also were forced to publicize confidential documents that showed cover-ups to protect molesting priests.

Now, those courtroom victories — and the secret documents they unveiled — seem like horrible foreshadowing to some.

"I shouldn't be surprised after all that I've been through, but it is shocking," said Ryan DiMaria, a clergy abuse victim who won a $5.2 million settlement in 2001 and went on to become an attorney for others molested by priests. "I think it's the tip of the iceberg in terms of finding out who knew about it and who was covering it up. That's the next big revelation."

Six of Weinstein's female accusers filed a federal lawsuit in New York earlier this month alleging he used a legion of assistants, casting agents, security firms, gossip writers and others to access a steady stream of unwilling sexual partners and silence their complaints.

There are differences in the scandals. Most of the clergy victims were adults when they came forward but were children when the abuse happened. And the weight of faith made it that much more intimidating for the accusers to come forward; some were cast aside by their families and called liars by fellow parishioners.

"I can't tell you how many times a client reported telling their parents about the abuse, and even their parents would strike back and say, 'You're lying,' " said attorney Tim Hale, who has represented alleged victims of both clergy abuse and abuse within the Boy Scouts.

Today, there seems to be less resistance to accepting these stories, possibly because the clergy abuse scandal increased public awareness that abuse can hide anywhere and an abuser can be anyone, said Richard Sipe, a former Benedictine monk who has written several books on clergy abuse and is an expert in the field.

Clergy abuse victims who for decades have felt they were alone are now seeing actresses like Gwyneth Paltrow and Salma Hayek come forward with similar stories, and that is upsetting but also healing, he said. Many have approached him in recent days to talk about how the daily headlines on sexual misconduct relate to their childhood experiences, he added.

Those who have lived the clergy abuse scandal, however, know this moment of public consciousness could vanish as quickly as it came. Women have just started filing lawsuits, a process that could drag on for years, and the public might grow skeptical or weary as more sexual misconduct claims stack up.

"To have real change, it was not enough to get the abusers out," he said. "You have to root out those who acquiesced and condoned it."