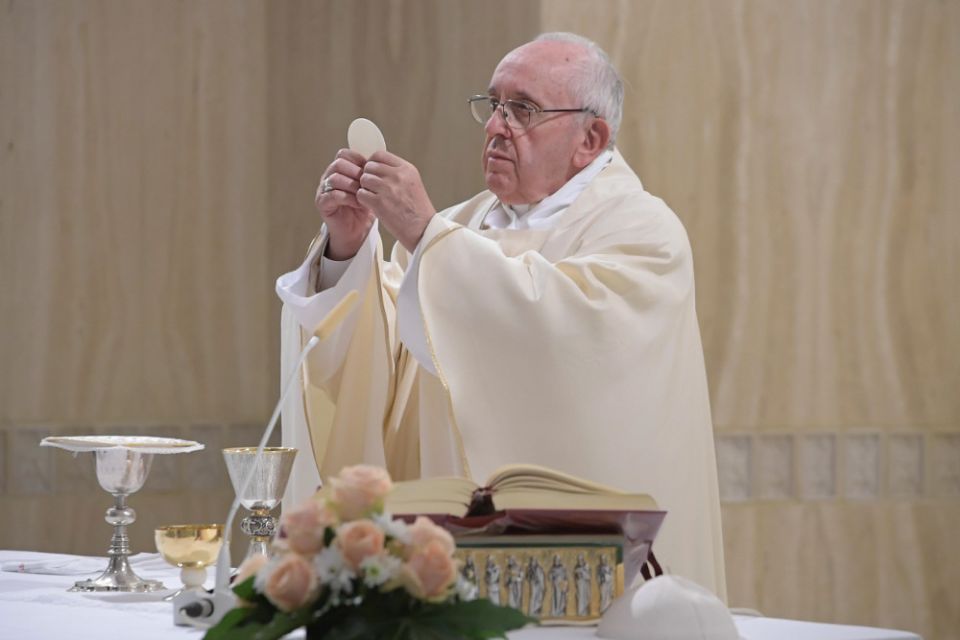 Pope Francis celebrates the Eucharist during morning Mass in the chapel of his residence, the Domus Sanctae Marthae, at the Vatican Sept. 10. Several members of the pope's advisory Council of Cardinals were present at the Mass on the first day of three days of council meetings. (CNS/Vatican Media)

Vatican City — Members of Pope Francis' international Council of Cardinals expressed "full solidarity" with him in the midst of questions about his handling of the clerical sexual abuse scandal and said the Vatican is planning a response to allegations made against him by a former nuncio.

Only six of the nine cardinals who are members of the council participated in the meeting Sept. 10.

The six "expressed full solidarity with Pope Francis in the face of what has happened in the last few weeks, aware that in the current debate the Holy See is formulating possible and necessary clarifications," according to a statement released after the first day of what was expected to be a three-day meeting.

The September session of the council was the first since news broke in late June about an investigation finding credible sexual abuse allegations against then-Cardinal Theodore McCarrick, since the release in mid-August of the Pennsylvania grand jury report on how six dioceses handled abuse allegations and since the publication in late August of a document by Archbishop Carlo Maria Viganò, former nuncio to the United States, alleging that Pope Francis knew of McCarrick's sexual misconduct yet allowed him to continue in active ministry.

Pope Francis formed the Council of Cardinals, often referred to as the C9, shortly after his election in 2013 to advise him on the reform of the Roman Curia and on church governance generally.

The statement Sept. 10 said that council members asked Pope Francis for a reflection on "the work, structure and composition of the council itself, also taking into account the advanced age of some of its members."

The three who were absent were: 85-year-old Cardinal Francisco Javier Errázuriz Ossa, retired archbishop of Santiago, Chile, who is facing questioning over his handling of abuse allegations; Cardinal Laurent Monsengwo Pasinya of Kinshasa, Congo, who turns 79 in early October; and 77-year-old Australian Cardinal George Pell, who currently is on trial in Australia on sex abuse charges.