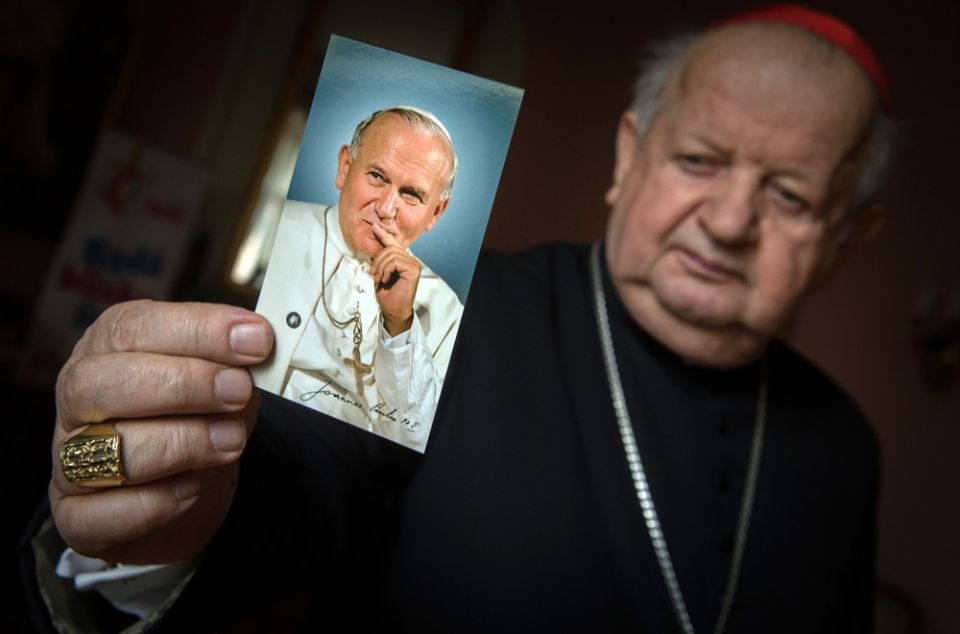 Cardinal Stanislaw Dziwisz of Krakow, Poland, holds a picture of St. John Paul II at his residence in Krakow March 4, 2016. Dziwisz was the personal secretary of the late pope. (CNS/Marcin Mazur, Bishops' Conference of England and Wales)

After the Vietnam War ended, U.S. military leaders recognized that they could not grasp what went wrong and begin to fix it unless everyone could speak with absolute candor. Every crisis demands the same, including the sex abuse crisis. So, while it is always a mistake to try and figure out what the crazies at Church Militant will do or say, it is important that we monitor what is being said by seemingly responsible people to make sure we are all keeping each other honest.

In a recent essay at The Weekly Standard, Mary Eberstadt wrote "The Elephant in the Sacristy, Revisted," a kind of reprise of an article she first wrote in 2002. "Back then, like today, the plain facts of the scandals were submerged in what we now call whataboutism," she writes. "According to these evasive maneuvers, the wrongdoing was supposedly explained by reference to clericalism, celibacy, sexual immaturity, and other attributes invoked to avoid the obvious." And, for her, then as now, the key to understanding the scandal was:

A cluster of facts too enormous to ignore, though many labor mightily to avert their eyes. Call it the elephant in the sacristy. One fact is that the offender was himself molested as a child or adolescent. Another is that some seminaries seem to have had more future molesters among their students than others. A third fact is that this crisis involving minors—this ongoing institutionalized horror—is almost entirely about man-boy sex.

I think this misses the point that what really scandalized the faithful was not that some priests were perverts, but that almost every bishop in the country never thought to call the cops when confronted with the perversion. That was the real scandal.

Eberstadt goes on to admit that back in 2002, some of her friends on the right were slow to accept the horror, and she even praises NCR for its reporting on clergy sex abuse. Now, she claims, it is those of us on the left who are turning a blind eye or worse. She first attacks Jesuit Fr. Antonio Spadaro, who had the temerity to label people who exhibit irrational hatred toward the pope and those bishops who support him as "haters." Then she wrote:

Many agonized Catholics desiring only to know whether allegations are true are now accused of participating in religious treason — of planning a "putsch" within the church, as Michael Sean Winters has put it in the National Catholic Reporter. Or consider some characterizations of the testimony of Archbishop Carlo Maria Viganò, former nuncio to the United States and author of a historically unprecedented and detailed 11-page letter released last month, accusing the pope and others of covering up abuse. Theologian Massimo Faggioli has called the work a "coup operation." Fr. James Martin has tweeted similarly of a "coordinated attack" intended to "delegitimize" the pope.

First, it is always an honor to be mentioned alongside Frs. Spadaro and Martin, as well as Professor Faggioli. But, while I can't presume to speak for them, I can assure Ms. Eberstadt that the reason I called Vigano's filthy lies a "putsch" attempt was because he not only mixed just enough truth amidst the lies to tantalize many journalists for a week, and apparently still has her believing him, but he called for the pope to resign. In the face of the fact that Francis is the only pope who ever really took action against McCarrick, this call for his resignation was self-evidently an attempt at triggering a putsch, the modern day ecclesial equivalent of the shot fired by the cruiser Aurora to trigger the October Revolution in 1917. This is what Viganò and his crowd of admirers want, for Francis to go.

"The Catholic laity is far from blameless in this hour. The scandals might have been reduced long ago if the laity's rejection of church teaching on birth control hadn't led to collusion of mutual misuse," Eberstadt writes. "Many priests winked at the laity's breaking the law against contraception and many laity tacitly returned the favor by not worrying overmuch about their priest and some of his friends." She is actually on to something important here. It is true that a sense of unreality and deceit surrounds the subject of sexual ethics within the Catholic Church, but that is a consequence of the deeper problem, namely, that the church's teaching on sex has been for too long presented in the language of neo-scholasticism and with no apparent connection to the Gospel. And, at least in the Anglo-Saxon world, and precisely among writers like Eberstadt, sexual ethics has been the primary focus of Catholic identity, giving the subject an outsized importance within the church.

Eberstadt is not alone. In a column at First Things, and distributed through syndication, George Weigel takes a swipe at Cardinal Blase Cupich, albeit without naming him. Weigel mistakenly compares a Cupich interview with a press conference given by Cardinal Dario Castrillon Hoyos, then-prefect of the Congregation for the Clergy, in 2002. Cupich did not say, as Castrillon Hoyos did, that the pope had better things to worry about than sex abuse. The Chicago cardinal said the pope had better things to worry about than the self-serving, score-settling "testimony" offered by Archbishop Carlo Maria Viganò, a man Weigel had previously dubbed the best nuncio to the U.S. ever. Weigel then goes on to quote at length and approvingly from a letter issued by Hartford Archbishop Leonard Blair to his priests and seminarians. Blair wrote:

The anger and disillusionment of our Catholic people is only matched by my own, and no doubt yours as well. After all the massive effort that has been made since 2002 to rid the Church of this evil and to try to bring healing to victim survivors, how is it possible that we find ourselves confronting the same perception of the Church, and of us as priests and bishops, as if nothing has changed?

But, why, then, if he is so angry and disillusioned, and so resolved to do what it takes to eradicate this evil, why has not Archbishop Blair taken the simple step of publishing the names of those priests who have been credibly accused of sexual abuse against a minor? Why does Weigel attend to his words and not his deeds? And why should anyone think Weigel — defender of serial molester Fr. Marcial Maciel, friend of enabler Cardinal Stanislaw Dziwisz, biographer of the pope who set the pattern of dismissing victims and covering up crimes — credible on this subject?

You can spend time checking to see which essayists quote which bishops, and whether those bishops have actually done anything to put the sex abuse scandal behind us. You can examine their arguments and decide whether they make sense to you or not. But, here is a shortcut, a quick way to tell if they are serious: Do they even mention St. Pope John Paul II? He was the one who not only set the pattern for ignoring victims, but who led the Vatican in the '80s and '90s, when bishops were routinely told to reinstate priests, not to be too tough on "poor father." He was the one who promoted Theodore McCarrick not once, not twice, not thrice, but four times. Tackling these well-known truths, however, would mean disturbing some of the mythology conservatives hold most dear. Today, in Washington, there is a conference sponsored by a variety of organizations on how Ronald Reagan and John Paul II changed the world. Unsurprisingly, the Gingriches will be in attendance, he the thrice-married defender of traditional marriage and she the aide-turned-mistress-turned wife, both of them principals in the JPII mythology industry. Until these conservatives are willing to take on his legacy, they are not being honest.

Now, we can add another question for people like Eberstadt and Weigel: In light of your concern to stop sexual predation, do you or do you not support a full FBI investigation into the allegations leveled against Judge Brett Kavanaugh?

I like conservatives. Some of my friends are conservative. And I welcome to the ranks of those concerned about clergy sex abuse all those who once ignored it and now consider it important.

But, I detest hypocrites. I do not think John Paul's dreadful legacy on sex abuse takes away from the great things he did, but it does require us to rethink the whole "John Paul the Great" cult. I do not believe all the diplomatic work on behalf of the church that McCarrick undertook is vitiated because we know now he was living a double life for many years and what he kept hidden was predatory and disgusting. Still, to give credence to Viganò's unproven and self-evidently score-settling allegations, dribbled out through friendly media outlets aligned against the pope, and not to smell a rat? You have to be willfully obtuse. Eberstadt may not see it. Weigel may not see it. Still, their ideology blinds them. The rest of us will insist that the moral reckoning the moment requires must wrestle with the real elephant in the discussion: John Paul II, more than any other person, set the model for obfuscation and cover-up that became the sex abuse scandal. Saying so does not make me a partisan. It is the simple truth.