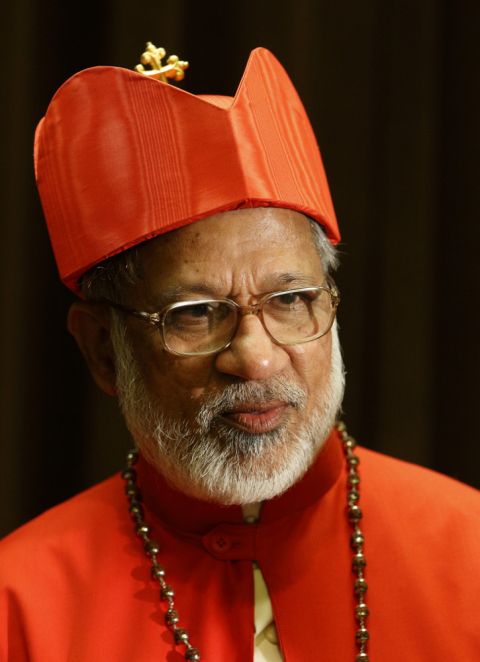 Cardinal George Alencherry of the Syro-Malabar Archdiocese of Ernakulam-Angamaly, India, is pictured at the Vatican Feb. 18, 2012. (CNS/Paul Haring)

Cochin, India — An Indian cardinal who faces multiple investigations for allegedly selling church land and incurring a multimillion-dollar loss has been cleared by his fellow bishops even though the Vatican has yet to rule on the case.

The action by the Kerala Catholic Bishops' Council regarding Cardinal George Alencherry of the Syro-Malabar Archdiocese of Ernakulam-Angamaly, India, has angered some members of the Eastern-rite church who have accused the bishops of attempting to influence civil and Vatican investigations.

The Kerala bishops' council, which met June 4-5 at its Cochin headquarters, found no merit in the allegations against the cardinal, ucanews.com reported. The council issued a summary of its conclusion June 6 to Catholics and parishes.

Archbishop Soosa Pakiam of Trivandrum, India, council president, said in the document that "our discussions have proved that the kind of corruption alleged in the land deal did not seem to have occurred."

The document expressed concern that "fissures within the church have led to controversies and given rise to apprehensions among the faithful."

"Measures have been taken to address the apprehensions and allegations pertaining to the land deals involving the Ernakulam-Angamaly Archdiocese within the church itself," it noted.

The summary, which was expected to be read in churches June 9, earlier was put on hold following opposition from within church leadership and the public.

"Our stand is not to create any problem for anyone. We want to settle all issues amicably and grow as one church," said Fr. Varghese Vallikkatt, deputy secretary-general of the council.

"We know there is no truth in the allegations against the cardinal. It might be possible there were some procedural errors, but it was not a case of a big scam. Nobody has taken money from the church and we want to clear confusion among believers," he said.

Riju Kanookaran of the Archdiocese Movement for Transparency, which is seeking greater openness in the church, said it was "incorrect and illegal" for the Kerala bishops' council to issue its report.

"Civil authorities are probing multiple cases against the cardinal and first information reports are registered against him in two cases," he told ucanews.com.

"Canonically, the issue is with the Vatican and there is no role for the KCBC to issue a circular exonerating the cardinal," he said.

Bishop Jacob Manathodath, who was appointed apostolic administrator of the Ernakulam-Angamaly Archdiocese in June 2018, submitted his report April 5 on the controversial land sale to the Vatican, but church officials have yet to announce a final decision in the case.

Kanookaran accused the Kerala bishops' council of attempting to influence the civil and Vatican investigations.

Vallikkatt, however, denied the allegation, saying it had not opposed any investigation. The Kerala bishops' council, he added, "instead reaffirmed its position that a probe should be conducted into the allegations."

In November 2017, a group of priests accused Alencherry and two priests of selling land and incurring a loss of about $10 million for the Kerala-based Eastern-rite church.

The Vatican in June removed the cardinal from administrative responsibilities in the archdiocese, but he continues to preside at liturgical and sacramental celebrations. He also continues to lead the church's decision-making synod based in Ernakulam.

In addition, the Vatican removed three prelates from administrative duties in the archdiocese, which has been experiencing infighting and financial controversies aggravated by disputed land deals.

The Vatican then appointed Manathodath as apostolic administrator of the archdiocese.

In February, a priest who is a junior official of the synod filed a criminal complaint accusing Manathodath and senior priest Fr. Paul Thelakat of forging documents to defame the cardinal.

The complaint said Thelakat forged documents showing that the cardinal had transferred money from his private bank accounts to some corporate accounts. The bishop was accused of presenting the documents to the synod with the intention of tarnishing the cardinal.