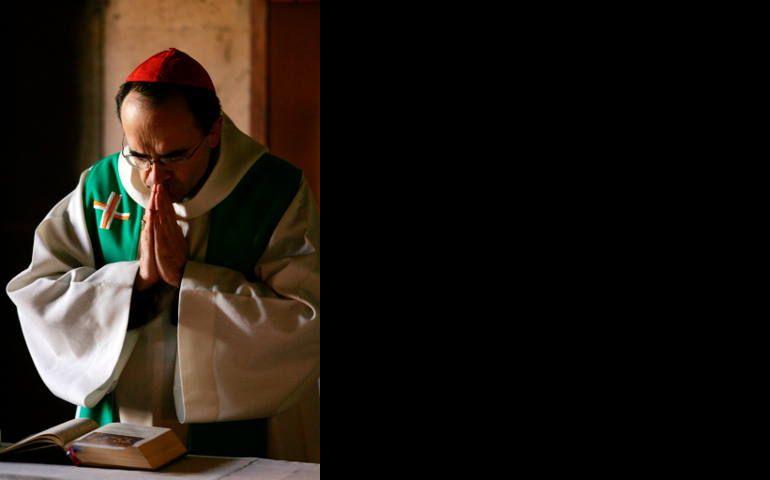 French Cardinal Philippe Barbarin, who is under judicial investigation over sexual abuse accusations against clergy, admitted making mistakes and unveiled new anti-abuse measures at a meeting with local clergy. He is pictured in a 2007 photo. (CNS photo/Mohamed Messare, EPA)

Lyon, France — A French cardinal under judicial investigation over his handling of sexual abuse accusations against clergy admitted making mistakes and unveiled new anti-abuse measures at a meeting with local priests.

"The cardinal has accepted the archdiocese committed errors in managing and nominating certain priests and has reiterated how important it is for victims of sexual abuse by clergy to see their right to truth and justice recognized," the Lyon archdiocese said.

The statement was published in French newspapers following a Monday meeting between Lyon Cardinal Philippe Barbarin and 220 priests from the eastern archdiocese, which has been hit hard by abuse accusations.

France's Catholic La Croix daily said the three-hour closed meeting in a Lyon suburb included testimony from at least one victim. It said participants described the atmosphere as "fraternal but noncomplacent" and said some priests had made "virulent criticisms" of the cardinal's conduct, while others urged clergy to "stick together."

In its statement, the archdiocese said the gathering had "unanimously determined to reinforce the struggle against pedophilia in the church," by strengthening clergy formation and "establishing new criteria" for future appointments. The statement said a "listening cell" would be set up for victims to discuss their needs with clinical psychologists, and a "college of experts," meeting twice monthly, would "study and analyze" the cases of accused priests.

"This is the engagement of a church determined to provide a sure home where families can feel welcomed in total security," the archdiocese said. "It underlines the archdiocese's willingness to assign a rightful place to all sufferings endured and is a collective effort to prevent such activities."

Meanwhile, the archdiocesan vicar general insisted most Catholic clergy had backed Barbarin and resisted calls for his resignation.

"It's clear we didn't have full knowledge of certain facts and were remiss in our obligation to investigate and check the truth," Fr. Yves Baumgarten told a Lyon news conference. "But while some priests wanted the archbishop to take a retreat during the judicial investigation, the great majority wanted him to continue his mission."

Prosecutors launched investigations after claims the cardinal failed to discipline a local priest, Fr. Bernard Preynat, who was charged Jan. 27 with "sexual aggression and rape of minors" while running a Catholic Scout group at Lyon's Saint-Luc parish.

Calls for Barbarin's resignation grew after apparent inconsistencies in his statements about when he first heard of Preynat's alleged offenses.

A group of 45 abuse survivors, La Parole Liberee, is suing the archbishop for failing to report abuse, a crime that risks a three-year jail term, and has also filed a lawsuit against Cardinal Gerhard Muller, prefect of the Vatican's Congregation for Doctrine of the Faith.

The French bishops' conference adopted guidelines for handling accusations in 2001. Its 10-member permanent council announced new measures April 12, including a dedicated Internet site to ensure victims were "received, heard and accompanied," and a "national independent commission of expertise" to advise local bishops.

However, in an April 13 statement, the Parole Liberee victim group said the measures sounded "like a rehash ... lifeless and without interest," adding that France's bishops had failed "the test of courage" urged by the pope and Vatican.

The mass-circulation Le Monde daily said April 26 that the church's response to abuse claims still appeared "lukewarm, with clumsy declarations," adding that the Lyon scandals had caused "tongues to loosen" around the country."

Details of report on clerical abuse in Dublin leaked

Pope decries 'globalization of indifference' to war, suffering in Syria