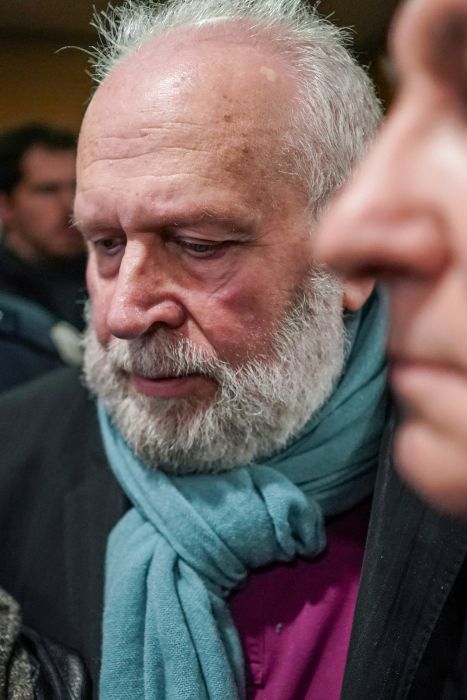 Former French priest Bernard Preynat arrives at the Lyon court house, central France, Monday Jan.13, 2020. Preynat, is accused of sexually abusing some 75 Boy Scouts went on trial Monday, but the proceedings were delayed until Tuesday because of a strike by lawyers. Preynat admitted in the 1990s to abusing boys, but was only removed from the priesthood last year. (AP/Laurent Ciprian)

Lyon, France — A former priest detailed Jan. 14 how he systematically abused boys over two decades as a French scout chaplain, and said his superiors knew about his "abnormal" behavior as far back as the 1970s.

The shocking testimony of Bernard Preynat is likely to further shake up the French Catholic Church as it reckons with sexual abuses that were long covered up. His account in court Tuesday suggested as many as five cardinals were aware of his behavior over the years, but didn't report it to police or prosecutors.

Preynat, now 74, is charged with sexually abusing multiple minors and faces up to 10 years in prison in what is France's biggest clergy sex abuse trial to date. He's suspected of abusing around 75 boys, but his testimony suggests the overall number could be even higher.

He said he abused up to two boys "almost every weekend" from 1970 to 1990 when he worked as their scout chaplain, and as many as four or five a week when he led one-week scout camps.

He said parents first alerted the diocese in the 1970s, but his hierachy never punished him.

"I often said to myself 'I have to stop' but I started again a few months later. I blame myself today," he told a hushed courtroom.

"It seemed to me that the children were consenting," he said. "I was wrong."

"It took me time to understand the repercussions on the children. For me, they were gestures of tenderness, and I took a certain pleasure in that," he said.

Church hierarchy is suspected of covering up Preynat's actions for decades, and a French cardinal was convicted last year of failing to report him to police or prosecutors. The case's repercussions reached all the way to the Vatican.

Victims testified about how much power Preynat held over them, and the lifelong damage the abuse caused.

"I saw this community that admired this man, and I was his protege, his pet," said Francois Devaux, whose decision to speak out about Preynat's abuse helped prompt the priest to come to terms with what he had done.

"He incarnated absolute hierarchy, sacred power," Devaux said. Later, he said he attempted suicide. "I blocked out a big part of my adolescence, which was violent and complicated."

Responding to Devaux's testimony, Preynat said, "I'm shattered to realize that because of me, he wanted to kill himself."

In 1991, Preynat swore to the then-cardinal that he would no longer touch a child, and no other victims have come forward saying he abused them after 1991.

At the time of the abuse, Preynat was in charge of the Saint-Luc scout camp in a private Catholic school in Sainte-Foy-les-Lyons in the suburbs of Lyon for 20 years, then continued his career as a priest until 2015 in the mountains near Lyon.

It wasn't until last year that the French Catholic Church found Preynat guilty of abuse and removed him from the priesthood.

In defrocking him, the church said in a statement: "In view of the facts and their recurrence, the large number of victims, the fact that Father Bernard Preynat abused the authority conferred on him by his position within the Scout group that he had founded … the court decided to apply the maximum penalty … namely the dismissal from the clerical state."

That decision came after French Cardinal Philippe Barbarin was convicted in March of covering up for Preynat's actions. Barbarin tried to resign, but Pope Francis refused to accept it until the appeals process is complete. An appeals court ruling is expected Jan. 30.

Several other church officials were also accused of failing to alert police or prosecutors, including a senior Vatican official, Cardinal Luis Ladaria. The Vatican invoked his immunity as an official of a sovereign state.

(Angela Charlton in Paris contributed to this report)