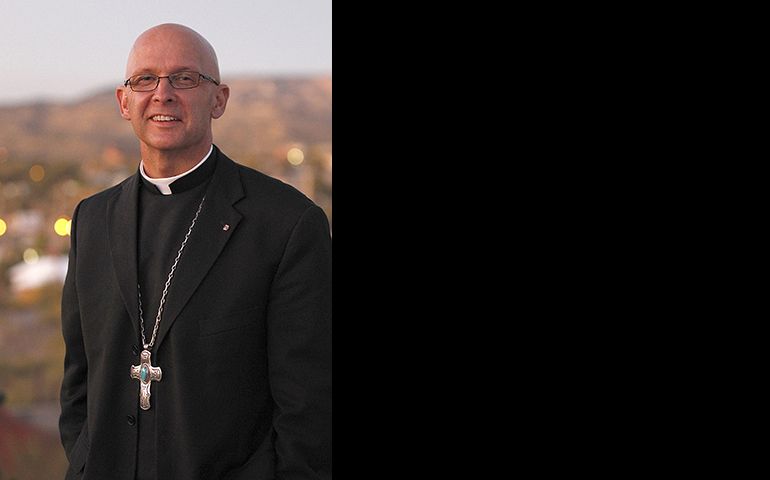 Gallup, N.M. — After weeks full of delays and another insurance dispute, attorneys for the Gallup diocese filed its Chapter 11 plan of reorganization in U.S. Bankruptcy Court March 21.

The plan's monetary provisions will create a fund that is expected to range from over $21 million to nearly $25 million, much of which will go to compensate 57 clergy sex abuse survivors who filed claims in bankruptcy court.

However, the plan's nonmonetary commitments remain a thorny, unresolved issue. After months of negotiation, those nonmonetary provisions -- commitments by the diocese to real institutional change in its response to clergy sex abuse and misconduct -- have yet to be filed with the court.

The Gallup diocese, which is mostly rural and covers much of western New Mexico and northern Arizona, filed its Chapter 11 petition on Nov. 12, 2013, after it had been named in 13 clergy sex abuse lawsuits and numerous other abuse claims.

If the proposed plan is approved by Judge David Thuma and by most of the case's creditors, it will end a contentious bankruptcy that has dragged on for more than 28 months to date, been marked by numerous disputes and delays, and racked up more than $3.6 million in professional fees and expenses.

According to the proposed plan, more than $21 million will be contributed by nine participating parties. The bulk of money -- $11.55 million -- will come from the Catholic Mutual Relief Society of America and Catholic Relief Insurance Company of America, collectively referred to as Catholic Mutual.

The remaining funds include:

• $1.85 million from St. John the Baptist Franciscan Province of Cincinnati;

• $665,000 from the nonprofit Catholic Peoples Foundation;

• $515,000 from the nonprofit Southwest Indian Foundation;

To raise most of its funding contribution, the Gallup diocese will obtain a loan for at least $2.3 million from the Catholic Order of Foresters, to be secured by school and retreat property the diocese owns in Gallup.

In addition, Catholic Mutual is contributing a $1.8 million "Unknown Claims Certificate" to insure any abuse claims that might be filed in the next eight years. Diocesan officials also hope to receive claim funds from the Home Insurance Company in Liquidation. If the diocese's allowed claim is approved, the reorganization plan's fund could receive an additional $3.75 million.

Two other Catholic entities -- the Corpus Christi, Texas, diocese and the Pennsylvania-based Sisters of the Blessed Sacrament -- have not entered into settlement agreements.

According to court documents, the Gallup diocese accepted Fr. Clement Hageman, "one of the worst abusive priests ever to afflict the Diocese," from Corpus Christi.

The Sisters of the Blessed Sacrament run St. Michael Indian School on the Navajo Nation, and at least one Franciscan friar who worked at the school is believed to have been named as an alleged abuser by claimants in the bankruptcy case.

The diocese's claims against the Sisters of the Blessed Sacrament will remain as unsettled, retained claims.

Individuals who filed sex abuse claims against the Gallup diocese may see average settlements of about $350,000, according to attorney James Stang, the counsel for the official committee of unsecured creditors that represents the interest of abuse claimants. Under the plan's allocation protocol, sex abuse claims will be reviewed and evaluated based on a point system. Some claimants may not receive any monetary settlement if their claim does not qualify under the allocation protocol.

All claimants, however, will receive a form letter from Gallup Bishop James Wall, already published in the plan documents, urging them to approve the proposed plan "so that we can focus on moving with you toward closure, reconciliation and healing."

Although the Gallup diocese has not yet filed its nonmonetary commitments agreement, Wall states in the letter: "The Plan also includes 'nonmonetaries' which are procedures for moving forward that were agreed upon by the committee and the Diocese. We know these are an important aspect of any healing process and both parties worked hard to arrive at a consensual agreement in this matter."

However, until that agreement is finalized and filed with the court, it remains to be seen whether the diocese is actually moving to accommodate the views of many abuse claimants who want to see dramatic changes in the way the diocese responds to sexual abuse and misconduct.

As demonstrated in a recent case of an accused priest who was quietly removed from ministry, the Gallup diocese does not routinely inform parishioners and the public about allegations against clergy, the outcome of investigations, or the names of individuals removed from ministry. It also does not make its diocesan policies and procedures regarding sexual abuse and misconduct available to the public.

Robert Pastor, the Phoenix attorney who filed the 13 clergy sex abuse lawsuits against the Gallup diocese, has remained a persistent critic of the diocese throughout the bankruptcy.

"My clients are anxious to get this case resolved," Pastor said in an emailed statement. "Bishop Wall's unwillingness to live up to his promise to be truthful and transparent when it comes to the names of pedophile priest and their files, however, is insulting. Bishop Wall's decision to maintain the veil of secrecy leaves them wondering whether this diocese will make any real changes regarding the protection of children."

[Freelance reporter Elizabeth Hardin-Burrola has been covering the Gallup diocese since 2002.]

How much corruption can we tolerate in the church before we leave?