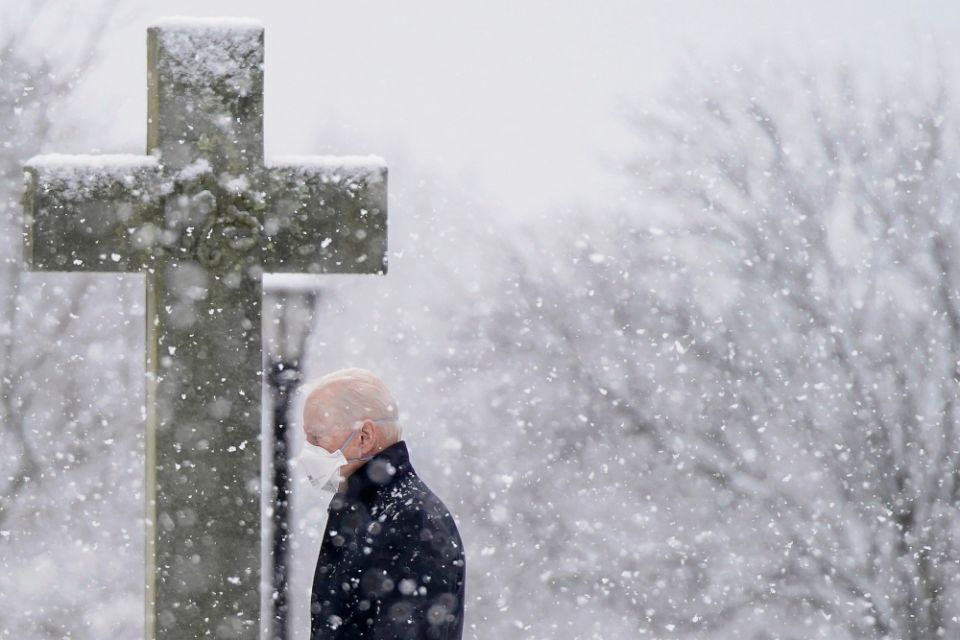 President Joe Biden departs after attending Mass at St. Joseph on the Brandywine Catholic Church as snow falls, Sunday, Feb. 7, 2021, in Wilmington, Del. President Biden is tasked with selecting a new ambassador to the Holy See to recommend to the Senate for confirmation. (AP File/Patrick Semansky)

The unemployed. The unvaccinated. The front-line health care workers. The struggling small-business owners. The kids who should be back in school. Millions need and deserve help these days.

Increasingly that help is arriving courtesy of President Joe Biden and the federal government. But there is a group that could also use — and certainly deserves — help that is rarely mentioned these days. It's a group that Biden, as the nation's second Catholic president, should feel personally bound to help.

For more than 25 years — nearly half of the president's adult life — the U.S. Catholic Church has been dealing with the horror of widespread clergy sex crimes and cover-ups. Yet U.S. abuse survivors have never received official acknowledgment of their pain by any federal official anywhere.

Many of the estimated 100,000 adults who were assaulted by Catholic clerics are struggling with depression, suicidal thoughts, fractured families, eating disorders, mental health issues and addictions to drugs, alcohol, sex or work. A disproportionate share of these survivors are unemployed, underemployed or unemployable.

Biden, who so obviously loves the church, has long been well situated to help heal families who are still suffering, many in shame, silence, isolation and self-blame, from this ongoing scandal. Yet he has essentially been silent about this crisis and the devastating impact it continues to have on so many.

Biden himself very likely knows at least a couple of child molesting clerics.

Over a span of 23 years, at least four predators were employed at his home parish, St. Joseph's on the Brandywine in Delaware: Fr. Henry Dreyer, Fr. Francis DeLuca, Fr. Edward Dudzinski and Fr. Peter Harney. Each of them is on an official diocesan list of those with "admitted, corroborated or otherwise substantiated allegations of sexual abuse, molestation and rape of minors."

In all, the president's home diocese has or had 39 publicly accused abusive clerics, at least 30 of whom church officials deem "credibly accused." It sought bankruptcy protection to avoid embarrassing trials, testimony and disclosures stemming from so much abuse.

What can Biden do to stop pedophile priests, prevent more cover-ups and bring solace to those hurt by these clerics?

Biden can urge Congress to hold hearings on this crisis and how similar horrors can be deterred, as at least a dozen nations have done at the national level.

He can prod state officials to reform their archaic, predator-friendly statutes of limitations. These measures, with their rigid and arbitrary deadlines, make it very tough for prosecutors to convict wrongdoers and for victims, witnesses and whistleblowers to expose wrongdoers in court.

He can pardon the thousands of abuse victims who are in prisons, having turned to drugs, liquor and antisocial behaviors to cope with the horrific pain they feel, even long into adulthood. On the campaign trail last year, Biden repeatedly said he no longer supports "tough on crimes" laws that disproportionately hurt the victims of child molesters much like they hurt communities of color.

In just a few weeks, Biden has shown both genuine compassion and impressive energy in addressing a myriad of serious problems. It's time he do so with the most serious problem in his own church.

David Clohessy is an abuse survivor and was national director of the Survivors Network of those Abused by Priests, or SNAP, for 30 years.