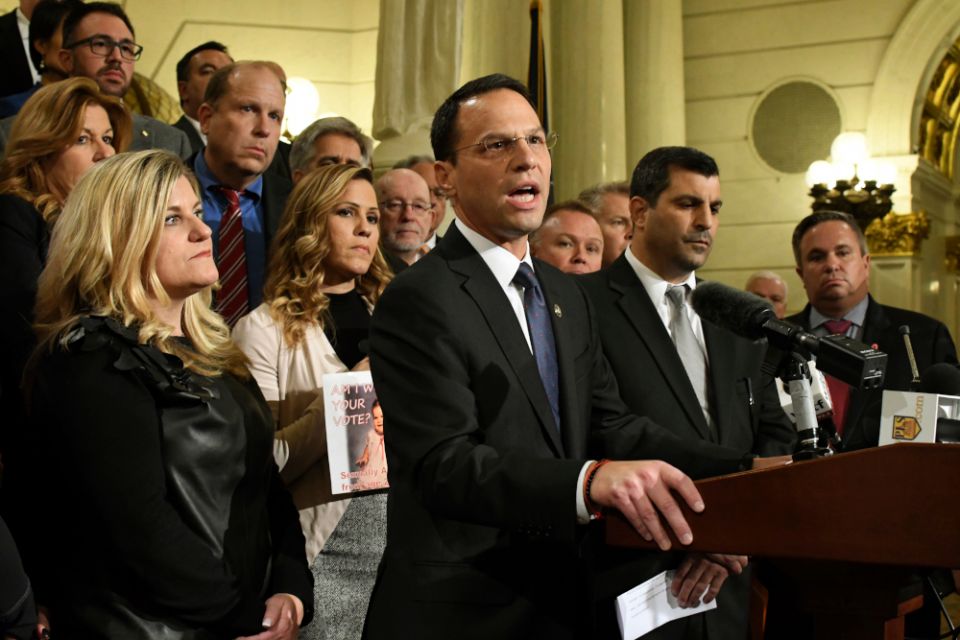 In this Oct. 17, 2018 file photo, Attorney General Josh Shapiro of Pennsylvania speaks at a news conference in the state Capitol after legislation to respond to a landmark grand jury report accusing hundreds of Roman Catholic priests of sexually abusing children over decades stalled in the Legislature in Harrisburg, Pa. A Pennsylvania judge has ruled, Tuesday, Jan. 7, 2020, that parents of children in the Roman Catholic Church and survivors of sexual abuse by clergy members can move forward with a lawsuit against the Diocese of Pittsburgh alleging that it has not fulfilled its obligations under state law to report child sexual abusers. The lawsuit was filed in 2018, a month after Shapiro released the state's landmark grand jury report. (AP/Marc Levy)

Philadelphia — A Pennsylvania judge has ruled that parents of children in the Roman Catholic Church and survivors of sexual abuse by clergy members can move forward with a lawsuit against the Diocese of Pittsburgh alleging that it has not fulfilled its obligations under state law to report child sexual abusers.

The parents and survivors claim that the Pittsburgh diocese along with the other seven Pennsylvania dioceses have created a public nuisance by failing to report every allegation of child abuse and are asking that they be compelled to release information about all known allegations. Lawyers for the parents and survivors said the order issued late Jan. 7 is the first time private citizens have been allowed to challenge the church to prove it is complying with a reporting law.

The order, issued by Allegheny County Judge Christine A. Ward, also sustained the objections from the state's other seven dioceses to being parties in the lawsuit because there were no specific allegations against them. Ward gave the attorneys for the parents and survivors 30 days to amend the lawsuit before she will consider whether to dismiss the other dioceses as defendants.

The lawsuit filed in 2018, a month after Pennsylvania Attorney General Josh Shapiro released the state's landmark grand jury report, asked that the dioceses be compelled to publicly release all information they had given to the grand jury and to provide a mechanism so that alleged victims could review records to make sure their allegations exist in the church's files, are accurate and have been sent to law enforcement.

"This ruling is unprecedented. This is the first time a cause of action has been brought by a non-survivor member of the public and the first time a court has said that is a viable legal strategy, that a private citizen can compel the church to prove it's complying with the mandatory reporting law," said Benjamin Sweet, attorney for the survivors and parents.

Ellen Mady, a spokeswoman for the Pittsburgh diocese, said she could not comment on the judge's decision because of the pending litigation.

"The diocese is in full compliance with the State of Pennsylvania's mandated reporting requirements, and reports all allegations regarding sexual abuse of a minor to the district attorney's office," Mady said.

Lawyers for the diocese had argued that it is not required to make allegations public, only to report them to law enforcement entities.

In December, the Associated Press found more than 900 priests and clergy members with allegations of child sexual abuse against them who had been left off of the lists of credibly accused priests released by dioceses and religious orders. More than 100 of the omitted priests had been charged with sexual crimes ranging from child pornography to rape of a child.

The AP found some dioceses declined to include classes of priests including religious order priests who serve in diocesan schools and parishes but do not report to the bishop. It was unclear in those cases if allegations of abuse were always reported to law enforcement officials when they were referred to the religious orders for investigation.

Lawsuits alleging church officials are creating a public nuisance and danger to children have been filed in a handful of states with mixed success, but those lawsuits have all been brought by survivors of alleged abuse or the families of those survivors. Many of those lawsuits have also focused on the nuisance created by the lack of disclosure in transferring predator priests to new dioceses. Several lawsuits are pending in other jurisdictions including California and New York.

Sweet said the Pennsylvania lawsuit is different than others brought against the church because none of the plaintiffs or attorneys are seeking any damages or monetary awards.

"They just want the church to be transparent and to protect their children," he said.

How can the church punish bad bishops?