McCarrick renounces place in College of Cardinals after revelations of abuse 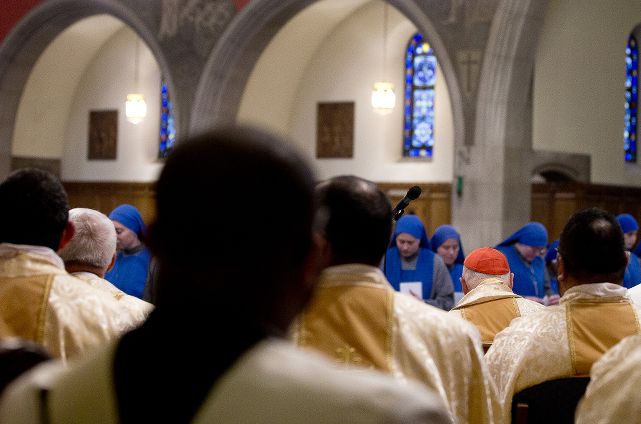 Retired Washington Archbishop Theodore McCarrick is seen from behind during a Mass in Washington in 2017. (CNS photo/Tyler Orsburn)

Retired Washington Archbishop Theodore McCarrick has renounced his position in the College of Cardinals, leaving the global Catholic Church's most symbolic and powerful group in the wake of revelations that he sexually harassed or abused several young men during his meteoric rise to become one of the U.S. church's most senior prelates.

The move, announced in a press release from the U.S. bishops July 28, is without precedence since the founding of the American church with the creation of the diocese of Baltimore in 1789. While several U.S. cardinals have come under scrutiny in recent decades for their handling of abuse cases, none prior had set aside their red cardinalatial robes.

Global precedents are also difficult to find, with the last cardinal to fully renounce his position being French theologian Fr. Louis Billot over a political disagreement with Pope Pius XI in 1927.

"Pope Francis has accepted the resignation of Cardinal Theodore McCarrick, Archbishop Emeritus of Washington, from the College of Cardinals," said a release from the U.S. bishops.

The release added that Francis has also "imposed on Cardinal McCarrick suspension ad divinis and directs him to observe a life of prayer and penance in seclusion until the completion of the canonical process."

A separate note from the Vatican press office said Francis had received McCarrick's resignation from the cardinalate in the evening of July 27, accepted it, and also "ordered his suspension from the exercise of any public ministry, together with the obligation to remain in a house yet to be indicated to him, for a life of prayer and penance."

But in a series of shocking announcements last month, the archdioceses of New York, Newark, and Washington and the diocese of Metuchen revealed that McCarrick had been ordered by the Vatican to step down from active ministry after allegations of sexual abuse were found "credible and substantiated."

The surfacing of allegations against McCarrick ignited a firestorm among Catholic commentators and across social media, with some of the U.S. church's usual right-left polarization momentarily disappearing as people expressed disgust that one of the country's most senior prelates had methodically hidden abuse over decades.

Many prominent voices across the political spectrum -- from America to First Things to Catholic World Report -- all asked questions of who among the U.S. bishops knew or suspected of McCarrick's actions.

In its own editorial, NCR called on Pope Francis to consider opening an apostolic visitation, or investigation, of the entire U.S. Catholic Church.

McCarrick's misconduct also again highlighted the failure of the policies adopted by the U.S. bishops' conference after the 2002 Boston clergy abuse scandal to address how bishops who abuse children would be investigated.

Boston Cardinal Sean O'Malley, considered one of the most credible voices among the U.S. bishops on matters of sexual abuse, appeared to add his voice to those asking for revision of the Charter with a July 24 statement that called for a policy "to address bishops' violations of the vows of celibacy in the cases of criminal abuse."

According to what is currently known, McCarrick's abuse appears to have taken place in New Jersey and New York, before his appointment to Washington.

In a statement June 20, Washington Cardinal Donald Wuerl, the current head of the archdiocese, said that after learning of the accusations against his predecessor he had requested a review of all the archdiocese's records.

"Based on that review, I can report that no claim -- credible or otherwise -- has been made against Cardinal McCarrick during his time here in Washington," said Wuerl.

Cardinal Kevin Farrell, who served as an auxiliary bishop under McCarrick in the early 2000s and is now the head of the Vatican's office for laity, family and life, said in an interview with Catholic News Service that he had "no indication, none whatsoever" of McCarrick's misconduct at the time.

Before McCarrick, the last cardinal to be publicly accused of sexual misconduct was retired Saint Andrews and Edinburgh, Scotland Archbishop Keith O'Brien. While O'Brien, now deceased, announced in 2015 that he would cease to exercise the rights and duties of being a cardinal he remained a member of the College of Cardinals.

In a statement after the announcement of his withdrawal from ministry, McCarrick said he had no recollection of the accusations made against him.

This story has been updated to correct McCarrick's title at Blessed Sacrament Parish.

A version of this story appeared in the Aug 10-23, 2018 print issue under the headline: McCarrick quits College of Cardinals after revelations of abuse .