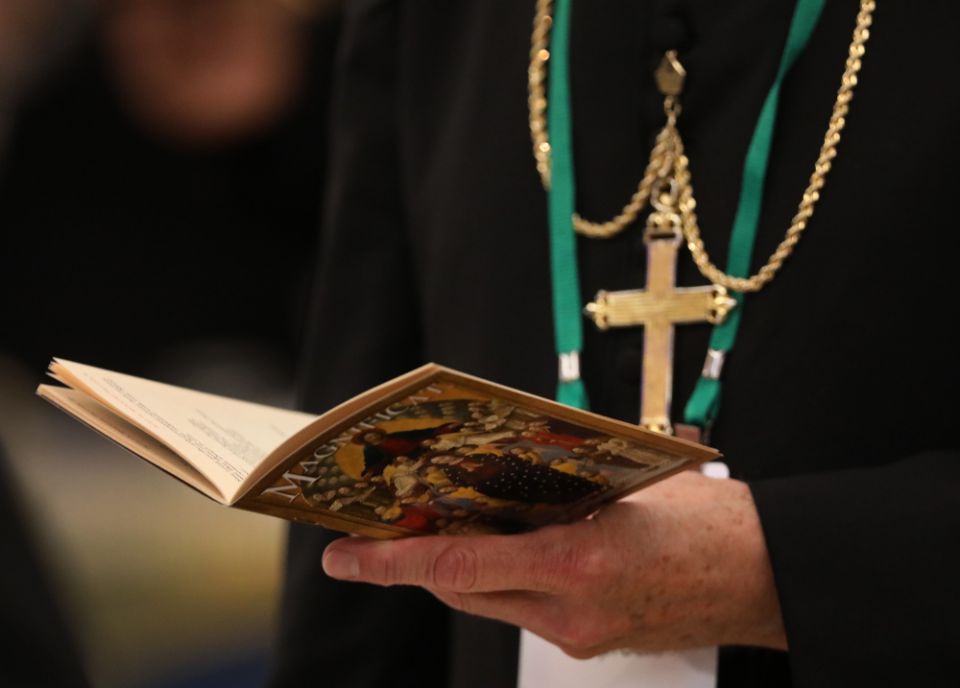 A bishop prays on the first day of the annual general assembly of the U.S. Conference of Catholic Bishops in Baltimore June 11, 2019. (CNS/Bob Roller)

Baltimore — Recalling "there were some expressions of 'dissent' " by some U.S. bishops when the bishops met last November over the Vatican's request that they postpone voting on agenda items related to the reemergent clergy sexual abuse crisis, Archbishop Christophe Pierre, the Vatican's nuncio to the United States, reminded them that "unity prevails over conflict."

"Working together provides us with the opportunity to speak and to listen," said the message from Pierre. Bishops, he added, "must be able to able to speak honestly and without hesitation."

The archbishop's message was read by Msgr. Walter Erbi, charge d'affaires at the Vatican's nunciature in Washington, June 11, the first day of the U.S. bishops' June 11-13 general meeting in Baltimore. Pierre was at the Vatican for a meeting of all nuncios.

"Even in these differences, it is important not to lose sight of the profound unity that we share," the archbishop's message said. "The Holy Spirit keeps the church united even amid honest disagreements."

There may be a temptation by bishops whose view is in the minority to "walk away or isolate ourselves in our own dioceses," Pierre said, rather than "search for a constructive way forward."

"Unity can prevail over conflict," he added. "The Holy Spirit harmonized diverse perspectives. ... The success of the Council of Jerusalem provides that unity prevails over conflict."

The Council of Jerusalem, conducted in the early church, determined that new adherents to Christianity need not follow certain Jewish ritual observances, such as circumcision or dietary practices, in order to be considered Christian.

Despite the desire among U.S. bishops to act quickly in November to address new crises on clergy sex abuse, the postponement of the votes on agenda items allowed the U.S. church to participate more fully at the Vatican's February summit on the protection of minors, Pierre said.

"The experience of your (bishops') conference could be shared with the others. And the president (Cardinal Daniel DiNardo of Galveston-Houston) and some other members of your conference were able to learn from others. ... The whole church was able to take steps to walk together," Pierre said, "and concrete actions could begin without one group running ahead of the other, and another group lagging too far behind."

This, Pierre said, was in keeping with the concept of synodality, which Pope Francis has stressed since the beginning of his pontificate in 2013.

"One of the reasons the Holy Father asked for a delay was that the whole church needed to walk together, to work in a synodal way," Pierre said, "with the guidance of the Holy Spirit to make the path forward clearer."

He added, "I too want to offer encouragement. Having just celebrated Pentecost, we too know the transformative power of the Holy Spirit."

The seven-day retreat in January for all U.S. bishops, led by Capuchin Franciscan Fr. Raniero Cantalamessa, preacher of the papal household, served as a help for bishops feeling pressure from many sides from the abuse crisis, according to Pierre, and reflected "the Holy Father's deep consideration for the pastoral situation in the United States and around the world. Many found the retreat grace-filled."