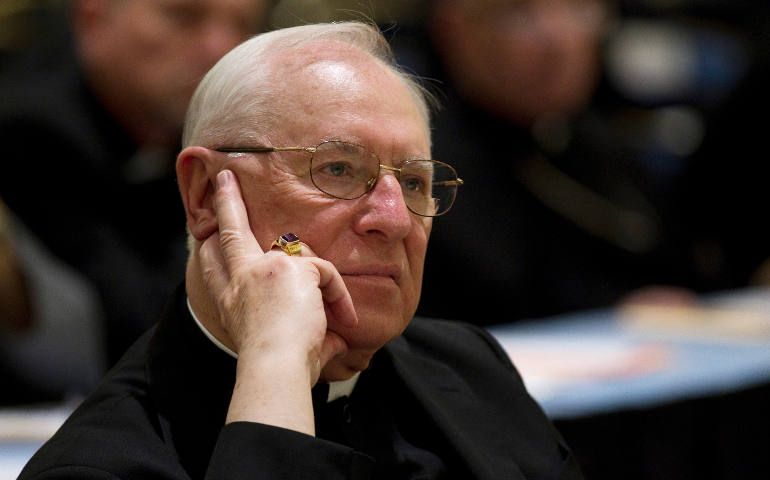 One of the Altoona-Johnstown, Pa., bishops singled out by a grand jury report for his "abysmal" record on sexually abusive priests responded in turn hours after its release, defending his handling of allegations as adhering to a strict review process and following advice of psychiatric experts.

In a 10-page statement filed with the Allegheny County Court of Common Pleas in Pittsburgh, Bishop Joseph Adamec argued the grand jury wasn't given "a full and balanced set of facts" as it related to his tenure as head of the diocese (1987-2011), and as a result, the criticism raised against him in the stinging report is "unfounded."

On Tuesday, Pennsylvania Attorney General Kathleen Kane presented the 147-page grand jury report, developed from an investigation of nearly two years and built from thousands of pages of transcribed witness testimony and more than 115,000 documents seized from the diocese's secret archives as part of a search warrant in August 2015.

The report presented an image of the diocese as "rampant with child molestation for decades" -- all told, hundreds of children abused by at least 50 priests and religious leaders -- while bishops, including Adamec and his predecessor Bishop James Hogan, enabled and concealed the problem, at times with lax law enforcement aware of allegations.

On Adamec specifically, the grand jury concluded, "his biography in the handling of sexual predators was abysmal." The bishop did not testify before the grand jury, which noted after a brief introductory question, he "exercised his right to refuse to answer questions on the grounds of incriminating himself."

In his statement, Adamec, 80, contests that his handling of abuse allegations "has no similarity to other clergy abuse scandals."

"Pre-2002, Bishop Adamec always adhered to a standard process for investigating, evaluation and addressing allegations of abuse," his statement said, adding the diocese implemented the Charter for the Protection of Children and Young People following its adoption by U.S. bishops in June 2002.

That process, he said, began with himself or the vicar general meeting with the accused priest, followed by a meeting with the alleged victim, if they were willing. From there, he said he sent the priest for psychiatric evaluation, and would base his decision on the priest's future in ministry from that report.

"The Bishop universally followed the advice of the psychiatric professional," said the statement, emphasizing the point in bold italics.

The grand jury was especially critical of the treatment and evaluations the diocese had conducted of priests. It said the treatment centers -- such as the Saint Luke's Institute in Maryland, and Saint John Vianney Center in Downingtown, Pa. -- were "reliant entirely on the cooperation and self-reporting of the sexual offender."

The grand jury stressed the difference between an offender not being diagnosed as a pedophile and an offender being cleared of being a predator. The self-reporting nature of the evaluations rendered them useless, it said, adding that such a simplistic diagnosis approach resulted in insufficient evidence to deem the accused a sex offender, and allowed "justification for poor judgement and reckless conduct."

"Hiding behind that tissue thin layer of justification, the Bishops returned these monsters to ministry," the grand jury said.

Adamec touted that of the 14 priests who had allegations brought against them between his appointment as bishop in May 1987 and the charter's adoption in June 2002, nine were either suspended from ministry or retired under prohibition of public ministry; all 14 underwent psychiatric evaluation. As for the five left in ministry, the statement said professional evaluations "had found each not be a danger to children."

"These professional opinions have been proven accurate by history -- no new allegation of abuse of a minor occurring subsequent to any of the five priests (or any other priest) being permitted to remain in active service was ever made," the statement said.

David Berardinelli, Adamec's attorney, told NCR in an email that the bishop's statement was not addressing the full grand jury report, as they were provided access to just a portion, pages 106-112. Those pages -- three of which republish the diocese's biography of Adamec -- focus on his handling of allegations brought against priests, specifically former priest Francis Luddy, Fr. Joseph Bender and Deacon Thomas Lemmon.

The bishop refuted claims of inaction in each case, along with five other priests. He said it was his petition to Rome that led to Luddy's laicization, and that he was not alerted of allegations against Lemmon until after the deacon had fled to Canada with a female minor and committed suicide in March 2003. He did acknowledge failures by the diocese "in handling issues that were raised regarding Lemmon," and that those ultimately fall to him as bishop.

The bishop also offered his viewpoint on the cases of five other priests.

Outside the six pages available to Adamec to review, an image arises of a bishop whose first move after receiving an allegation was to conduct an internal investigation or require treatment, rather than turn the incident over to the police.

On June 24, 2002, a man met with Adamec to discuss alleged sexual abuse he experienced as a 16-year-old altar boy in 1979 by Fr. Martin Cingle. A week later, Adamec met with Cingle, who couldn't recall the allegation; the priest was sent for treatment, which found no evidence of psychopathology and nothing in his history consistent with "attempting to initiate sexual relations with a man." Cingle returned to full-time ministry, and the case closed a year later after the victim never provided Adamec with a written account of the alleged abuse.

In October, Bishop Mark Bartchak suspended Cingle from ministry at the request of Deputy Attorney General Daniel Dye, after Cingle testified before the grand jury that he had could have accidentally fondled the boy while the two slept in T-shirts and underwear on a cot at the home of the boy's relative.

According to the grand jury report, Adamec was told by Cingle that the fondling was "accidental," and through the testimony of other individuals (Adamec elected to plead the Fifth), the grand jury learned that Adamec in describing the act made a similar cupping gesture to the one Cingle made during his own testimony. The grand jury said that Cingle should have been removed at that time, and the incident reported to law enforcement.

"We must conclude this is yet another example of the Bishop's reliance on self-reporting to treatment centers which render conclusions upon a paucity of evidence and a desire to avoid scandalizing the Diocese on his watch," the report said.

The Adamec statement defended criticism of his practice of not preserving priests' psychological reports, saying his "regular practice was to retype the substance and content of the report in near verbatim fashion in his own notes about the allegation and investigation of it."

Concerning the Diocesan Allegation Review Board he established, the statement said he "consistently followed the advice of the DARB," including the suspension of at least five priests from ministry. The grand jury panned the review board, noting it never met without Adamec present, and put alleged victims through a far more rigorous inquisitory gauntlet than it did the accused priests.

"The imbalance in favor of the Diocese and the accused priest is total," it said

Adamec also did not comment on the grand jury's description of the "cold bureaucracy" exhibited in the "pay-out scale," which he constructed to determine compensation for victims of specific sexual acts, as it fell outside the pages provided to him. Nor does it address claims that he threatened excommunication against those who sought to publicize the abuse crisis or bring charges against the diocese.

"We are being judged for our past actions on the basis of what we know today, and I think that is not fair," Adamec told NCR. "What we know today and did not know 30 years ago, nobody else knew either. It wasn't just the church; it was the police, psychologists and society in general -- like with alcoholism and addiction, everyone thought the guy could change. Now we would do things differently."

Asked then about local Catholics who questioned why the diocese didn't settle pending cases out of court, Adamec replied, "Sometimes there are things more important than cost -- values that this suit involves and that we hold as church. There was an issue of just how responsible a diocese ought to be 24 hours a day, for everyone assigned to it."

The suit Adamec referred to was the Luddy civil lawsuit, in which an Ohio jury in 1994 awarded $1.2 million in compensatory damages.