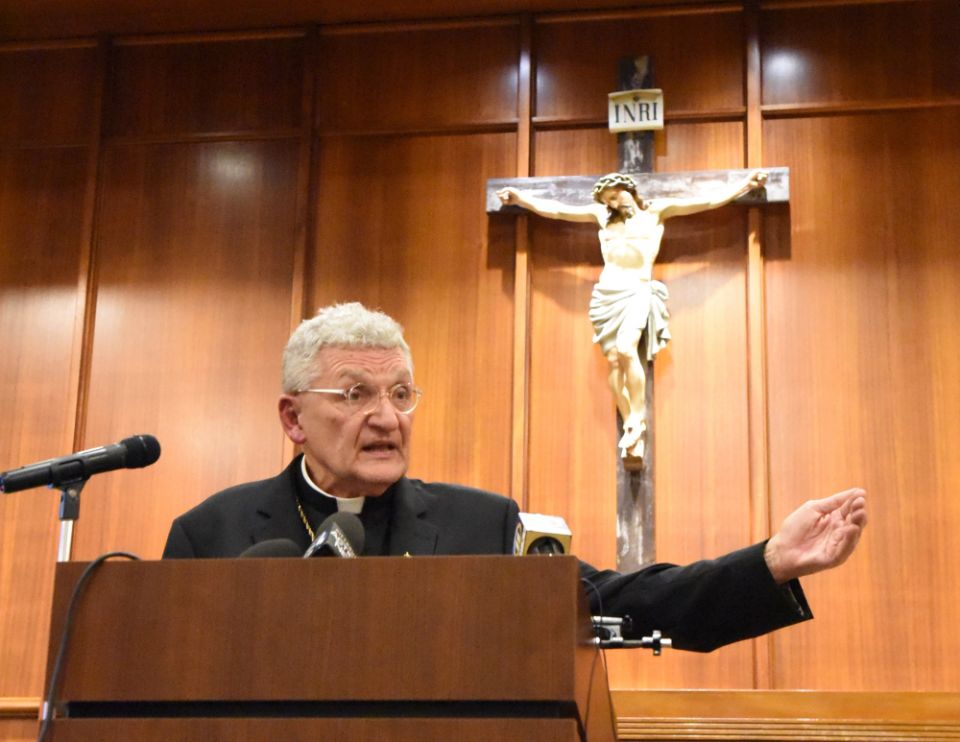 "Ever since I first met victims of clergy child sexual abuse in 1988, I have seen the immense pain that this crime causes to its victims, to their loved ones and to the heart of Jesus," Zubik said Aug. 14 during a news conference at the diocese's pastoral center.

His comments followed the release of a Pennsylvania grand jury report that detail a two-year investigation of more than seven decades of clergy sex abuse claims.

"I have cried with them and for them over the damage done to them and their families by men whose lives should have been committed to protecting their souls from harm," he said. "I dedicate myself to helping them and to doing everything possible to prevent such abuse from happening again."

At least 90 percent of all reported child sexual abuse by clergy in the diocese occurred prior to 1990, he said.

"The Diocese of Pittsburgh today is not the church that is described in the grand jury report. It has not been for a long time. Over the course of the last 30 years, we have made significant changes to how we prevent abuse and report allegations," the bishop said.

"There is no priest or deacon in public ministry today in the Diocese of Pittsburgh with a substantiated allegation of child sexual abuse against him," he said.

Zubik and the bishops of five other Latin-rite dioceses in Pennsylvania — Allentown, Erie, Greensburg, Harrisburg and Scranton — were subpoenaed Sept. 1, 2016, for all records pertaining to child sexual abuse by clergy. The diocese turned over its records, including those in which the allegation was deemed not credible, and those against religious order priests who had lived or worked in the diocese.

The diocese reported that at least 1,800 diocesan priests had served the Diocese of Pittsburgh since the first allegation in 1935. In its section on the Pittsburgh Diocese, the grand jury report named 90 offenders, including 22 priests or brothers who belonged to a religious order or another diocese.

Among the 90 are eight cases that the diocese did not substantiate as child sexual abuse. Another 29 cases involved allegations that were received after the priest had died and no canonical inquiry was made.

The diocese posted on its website a list of 83 accused diocesan priests, including some whom the grand jury report omitted.

The report alleges that leaders of the six dioceses covered up allegations of clergy sexual abuse.

"There were instances in the past, as outlined in this report, when the church acted in ways that did not respond effectively to victims. Swift and firm responses to allegations should have responded long before they did. For that I express profound regret," Zubik said.

"At the same time, I express gratitude to survivors who have taught us to respond with compassion to those who are wounded and with determination to remove offenders from ministry," he added.

The bishop said errors of the past reflected an ignorance common to many institutions concerning the devastating effects of child sexual abuse and the danger of offenders repeating the abuse.

The use of ineffective measures in that era "wasn't deliberate," he said. "A cover-up would have to be something that you intentionally did."

The diocese said Wuerl took several aggressive actions in response to reports of clergy abuse including challenging the Vatican's highest court in the early 1990s for the right to permanently remove sexually abusive priests from ministry, ultimately winning that fight in 1995.

The grand jury report, Zubik said, was incorrect in claiming that Wuerl had advocated a "circle of secrecy" around child sexual abuse. The bishop explained that the phrase was jotted down by someone else, who was in the process of telling a priest that he would have to break his own "circle of secrecy" and disclose his history of misconduct outside of his 12-step recovery group.

"I think when the grand jury was taking a look at it, they misinterpreted it," he said.

Regarding the report's other inaccuracies and omissions, Zubik urged people to read the diocese's response and statement filed with the Pennsylvania Attorney General Josh Shapiro. The documents are attached to the grand jury report and were posted at the diocesan website.

Zubik also outlined steps that the diocese has taken since the 1980s to remove offenders from ministry, assist victims and protect minors from future abuse. He cited the overhaul of the curriculum in all diocesan dioceses to better prepare men for a healthy celibate lifestyle as an example.

Other actions undertaken by the diocese include the establishment in 1989 of its Independent Review Board, which continues to evaluate and recommend to the bishop actions regarding allegations of child sexual abuse. In 1993, the diocese hired a licensed social worker who meets with victims and responds to their needs. The diocese offers psychological counseling for victims and their families with a licensed therapist of their choice.

Asked what he has to say to Catholics who feel betrayed, the bishop responded that he felt likewise.

"I was ordained a priest 43 years ago," he said. "The goal of my life as a priest, when I said 'yes' to becoming a priest, was that I was going to reflect the person of Jesus Christ. The fact that other people who said 'yes' did the things that are recounted in this report is a tragedy. And I am scandalized as well."

Rodgers is general manager of the Pittsburgh Catholic, newspaper of the Diocese of Pittsburgh.

Vatican meeting on abuse opens with indictments from victims