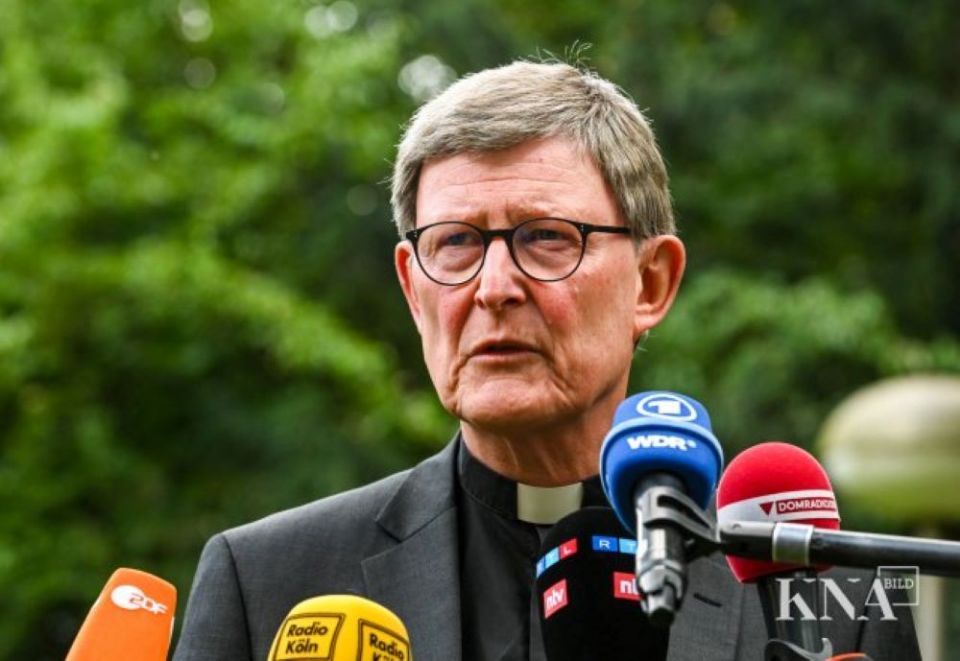 German Cardinal Rainer Maria Woelki speaks during a Sept. 24 news conference in Cologne. Pope Francis has refused his resignation but granted him a six-month period of spiritual reflection following an investigation into his handling of clergy sexual abuse cases. (CNS/KNA/Harald Oppitz)

ROME — Pope Francis has refused the resignation of Cardinal Rainer Maria Woelki, the embattled archbishop of Cologne, Germany, and has instead granted him a six-month period of spiritual reflection following an investigation into his handling of clergy sexual abuse cases.

The decision was announced Sept. 24 in a two-page communique from the Holy See that was released by the German Bishops' Conference, which stated that Pope Francis met with Woelki last week for a "long conversation" after which the pope did not accept Woelki's resignation and granted the cardinal's request for leave.

In June, Cardinal Anders Arborelius of Stockholm, Sweden, and Bishop Johannes van den Hende of Rotterdam, Netherlands, conducted a weeklong Apostolic Visitation in the Cologne Archdiocese, which found no evidence that Woelki acted unlawfully, but acknowledged that the cardinal had "made major mistakes in his approach to the issue," especially at the level of communication.

"This has contributed significantly to the fact that there is a crisis of confidence has come, which disturbs many believers," the memo stated.

Woelki's spiritual sabbatical will begin in mid-October and conclude ahead of Lent in March 2022. During his absence, auxiliary Bishop Rolf Steinhäuser will serve as the Apostolic Administrator of the archdiocese.

Although Woelki, 65, had previously indicated he would step down from his post if implicated for negligent handling of abuse, more recently he had resisted calls to step down.

“To simply take the moral responsibility with me and to go to protect the reputation of the office of bishop and of the church — I think that's too easy. And in my view it is also wrong," he said March 23. "Such a resignation would only be a short-lived symbol."

Woelki was auxiliary bishop of Cologne from 2003-2011 and was made archbishop in 2011 by Pope Benedict XVI.

In 2018, he commissioned a Munich law firm to issue a report on the archdiocese's handling of abuse; he later blocked its scheduled release in fall 2020. Following the report's eventual release this March, Woelki said he had acted lawfully, but acknowledged that the church had made mistakes and that some cases could have been handled better by him personally.

Woelki is one of the German church's leading conservative prelates and his sabbatical comes amid the German Sydnodal Path, a closely watched series of assemblies on the German church that will address a range of issues, including the church's approach to sexual ethics and the abuse crisis. Woelki has been a skeptic of the process, warning that it could lead to schism.

Earlier this month Pope Francis refused to accept the resignation of another German prelate, Archbishop Stefan Hesse of Hamburg, a decision that drew swift criticism from clergy abuse survivor groups in the country. In March of this year, the pope had granted Hesse a similar "time out" following his own mishandling of abuse cases.

In June, Cardinal Reinhard Marx of the Archdiocese of Munich and Freising, and one of Pope Francis' closest advisers, announced that he had voluntarily asked the pope to accept his resignation as a sign of responsibility for the decades-long "systemic failure" of Catholic Church leaders in responding to clergy sexual abuse.

Francis refused that request. While acknowledging that the country's handling of abuse had been a "catastrophe," he asked the 68-year-old prelate to stay in his post.

"If you are tempted to think that, by confirming your mission and not accepting your resignation, this Bishop of Rome (your brother who loves you) does not understand you, think about what Peter felt before the Lord when, in his own way, he presented the resignation: 'Get away from me, I am a sinner,' " Francis wrote to Marx. "Listen to the answer: 'shepherd my sheep.' "